Students keep up the pressure on NatWest

Week 3 of protests at the campus branch of NatWest at the University of Birmingham saw students maintain pressure on the bank, with the demand for RBS to divest from the fossil fuel industry which is funding climate chaos. 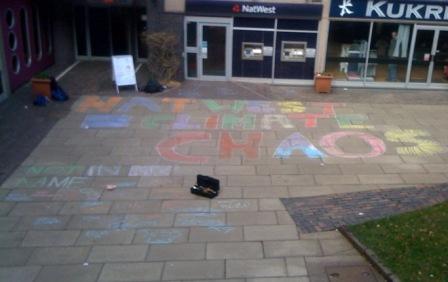 the colourful and creative action outside NatWest continues...

For the third week running, students at the University of Birmingham held a protest outside the campus branch of Natwest. The protest was against the investments of RBS (owners of NatWest), who are the leading investors in fossil fuel projects with loans going to coal fired power stations, tar sand extraction and the construction of pipelines around the world.

This week students created another chalk graffiti, reading NatWest = Climate
Chaos and added to the creative vibe by singing protest songs, with their passionate voices being accompanied by a trumpet. The imaginative action caught the attention of students and staff at the University and there was a keen up take on signing a chalk petition. In addition to this a letter of complaint was handed in to the manager of NatWest, explaining the protesters standpoint and the threat of boycott if there is no change in RBS’s dirty investments. There was minimal security interference however the attempt at intimidating students by taking photographs of them was used again by security staff.

The protests are set to be a weekly activity on campus to force them to take note of the call for a switch in financial support from the fossil fuel industry into renewable energy solutions. This is crucial for a sustainable and safe future and RBS needs to now listen to the voices that matter, especially since the majority of the bank is under public ownership after massive government bail outs. Protestors at the University are calling for fellow students to boycott the bank in September 2009 if the careless investments of RBS are not halted. They also encourage students nationwide to take action against local branches of RBS and NatWest to continue the pressure.