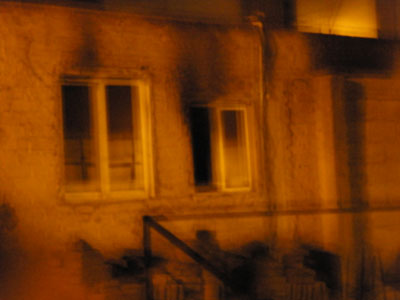 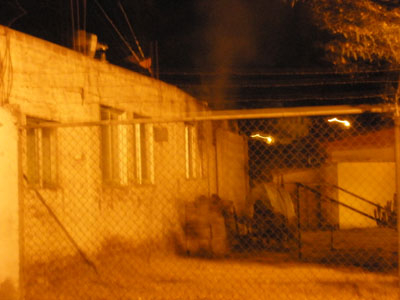 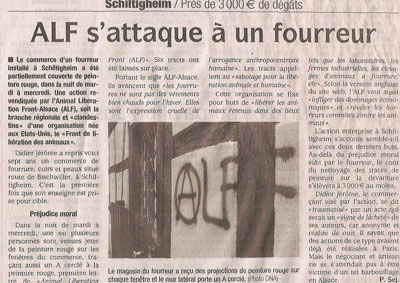 "On Friday night March sixth we burned a vehicle at the home of David Jentsch [...] in Los Angeles. Jentsch is a piece of human shit who addicts monkeys to methamphetamines and other street drugs at the University of California Los Angeles.

He associates with other pieces of human shit like Edythe London who is addicting and experimenting on monkeys. The things you and others like you do to feeling sentient monkeys is so cruel and disgusting we can't believe anyone would be able to live with themselves.

David, here's a message just for you, we will come for you when you least expect it and do a lot more damage than to your property. Where ever you go and what ever you do we'll be watching you as long as you continue to do your disgusting experiments on monkeys.

And a special message for the FBI, the more legit activists you fuck with the more it inspires us since we're the people whom you least suspect and when we hit we hit hard.

*Personal details removed as per:

"Under a mystical blue sky we went out in the early morning of march the 9th.
This time we paid a visit to the vivisection lab and congres-building of the WAGENINGEN UNIVERSITY.

You people shouldn't let so many loose bricks lay around on your parking lot.
We smashed 2 windows with them.

WE WANT TO SEE THE UNIVERSITY OF WAGENINGEN TAKE ACTION NOW!
Do not wait for the BIG BOMB!
We don't want to throw it, but you certainly don't want to receive it.

Have fun working in the cold SCUM.

It's been a few weeks since our last communique.

Our latest Annoyance Attack was on the Fur Industry!

This attack was even bigger than our previous attack on University of Utah Researchers.

List A:
(we targeted these friends because of their huge impact on the Fur Trade)

List B:
(These friends were chosen for the reasons stated below them)

*Black Willow Mink
340 North Main Street
Coalville, Utah 84017
(These friends were chosen because they actually have a website to promote their disgusting trade)

*Margetts Mink Ranch
1975 Canal Road
West Jordan, Utah 84084
(These friends were chosen because their murderous breeding mill is smack dap in the middle of a neighborhood)

*River Jordan Mink Ranch
9330 North 10400 West
Lehi, Utah 84043
(These friends were chosen because they have one of the biggest fur farms in America)

*McMullin & Sons Fur Farm
10495 South 1540 West
South Jordan, Utah 84095
(These friends were chosen because they had the lucky opportunity to be visted by some aliens last year who abducted some of their mink. Hope the extra financial pressures put you under. Also they are located in a neighborhood as well.)

Each of these 'friends' recieved over thousands of dollars worth of magazine subscriptions and junk mail.

"In the early hours of March 5th we set out and visited 8 McDonalds, 5 KFC's, 2 Carls Jr.'s, and a Sizzlers (in and around Riverton, South Jordan, and Herriman, Utah). In each facility we spray painted some lovely messages in the bathroom stalls with sayings like 'meat is murder' and 'Flesh is Death' as well as 'ALF'. We also took the liberty to clog all the toilets by stuffing them with sponges we had dried into small balls days earlier. Later in the night we went back and glued all the locks and spray painted the windows with 'ALF'. We also shut the gas off to all (except to sizzler which we couldn't locate). We won't stop until you stop killing countless numbers of animals for your tastebuds and pocketbooks.

In solidarity with our brothers and sisters in Mexico. Viva la revolution.
-ALF"

According to newspaper reports, on March 6 an aviary was cut open at a farm in Pesaro and 6,000 pheasants were released. The farm raises birds for hunting. The message, "tonight you have discovered freedom" was found on a wall.

"Two circus posters were taken down in downtown Ozark, Missouri (USA)
From a member of the 417-ALF."

"Paint at a fur shop [madrid]

A few weeks ago we went back to the Susanne fur shop, located on the street Clara del Rey, and we gave them a gift in the form of six paint bombs that redecorated their metal gate, facade and glass dispay case.

It appears that they did not like the detail very much since they spent a large part of the next day trying to remove the mess of paint that we had prepared with so much affection for them. We will have to keep trying..."

"THE FIRE WAS NOT AN ACCIDENT" (Mexico)

"On the evening of March 6 the Animal Liberation Front-México Anti-speciesist returned for the second time to the Public Ministry of the Judicial Police and painted in protest: 'The fire was not an accident!' and 'F.L.A.M.A..' Then, a few meters ahead in a health center belonging to the torturing government of Mexico State, while police were distracted, we painted on one of its white walls, 'Fire to the police for the massacre of defenseless animals on the 23rd!'

We return to Jaltenco to continue the war!

"The Frente de Liberación Animal – Anti-speciesist México is responsible for the arson inside the Public Ministry of the judicial police in the municipality of Jaltenco in Mexico State. We did this as a response to the slaughter of dogs and cats perpetuated by police in that municipality on February 23. The filthy authorities hid the truth and said that the fire had been caused by a heater and that it had only burned some paper. They know more than anyone that important material was destroyed and that the losses were thousands of pesos.

The war will continue, the torturing police bastards will receive a radical response to the crime of the 23rd.

"Recently we paid a visit to the sister of Los Angeles Mayor Antonio Villaraigosa. The Mayor refuses to hire a new manager to stop the carnage of animals in our city of angels. Paint bottles were used to redcorate his sister's porch and driveway. We hope the red paint serves as a reminder to the blood on her family's hands. Be warned, next time we throw bottles, they'll be filled with gasoline.

"In the night between Tuesday March 3 and Wednesday March 4, 2009, the Alsace section of the ALF attacked a fur shop in Schiltigheim, Strasbourg. We covered its windows with red paint. We left behind leaflets against 'anthropocentric human arrogance, and for human and animal liberation.' This article appeared in Les Dernières Nouvelles d'Alsace on Thursday, March 5."