Amidst a deepening economic crisis engendered by the global financial meltdown, thousands of women workers belonging to the Alliance of Progressive Labor (APL) poured out into the streets of key Manila, Cebu, Davao, General Santos and Cotabato, on the occasion of the International Women’s Day to demand full employment and equality between women and men. 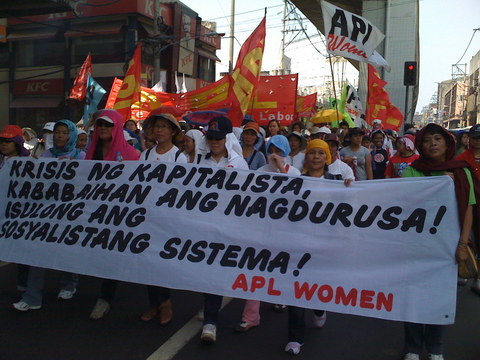 “The global financial crisis is the final evidence that the neoliberal project – the restructuring of the economy through privatization, liberalization and deregulation – has miserably failed,” Marlene Sindayen, APL Women coordinator, said. “What we need is nothing less than a complete overhaul of the government’s flawed market-oriented economic policies. Unfortunately, the Arroyo regime’s response to the worsening crisis is severely inadequate,” she declared.

The APL Women asserts that socialism is the long-term solution to the systemic crisis of capitalism. They call for a radical shift in the country’s economic paradigm: one that would steer the economy towards “full employment” through State-led industrial development and the completion of the agrarian reform; and, where democratic economic planning, especially for providing universal access to education, health and housing, plays a big role in “stimulating” the economy through social pump-priming.

Recent ILO Global Employment Trends report indicated that global unemployment in 2009 could increase by 18 to 30 million workers, depending on the recovery efforts, and by more than 50 million if the situation continues to deteriorate. The report also said that some 200 million workers could be pushed into extreme poverty.

Textiles, garments, electronics and tourism would suffer the most. Unfortunately, women dominate the workforces in these industries. Furthermore, companies will rather retrench women as they usually enjoy added benefits such as maternity leave.

“Any meaningful economic policy response to the crisis must address the gender bias,” Sindayen said. “No matter what policy and programs that government implements, so long as it does not alter the structural roots of inequality between men and women – patriarchy – women will always be at a disadvantage,” she added.

The APL Women also lambasted the proposed stimulus package. “The Arroyo regime’s stimulus package is a sham!” Fatima Cabanag, APL Women community leader declared. She said that it lacks a clear plan on how the funds will actually lead to jobs generation. “This will just end up ‘stimulating’ once more the oversized greed and pockets of Arroyo’s cohorts,” she added.

For their part, youth members of APL Women also ridiculed the PGMA’s claim that education is a primary concern of her regime. “The large number of out-of-school-youth today, disproves the claims of the Arroyo regime,” Mira Capellan of APL Youth, said.

“Today we march to unmasked a ‘kabaro’ and expose her empty words and actions for women in general. Her consistent disregard for women’s issues is a disservice to all of us,” Sindayen ended.

In Manila, at least 1,000 members of APL Women assembled in Welcome Rotonda and marched towards Mendiola bearing empty pots and pans to symbolize the increasing hunger brought by the crisis. In UST, they linked with World March of Women and Welga ng Kababaihan.