Solidarity picket of Bristol prison – Saturday 21 March at 3pm
This event is an act of solidarity with all the EDO Decommissioners awaiting trial, but especially the 2 defendants remanded in prison since January 17 2009. Of these 2, one Robert Alford remains in HMP Lewes in Brighton, whilst the other Elija (James) Smith), is now held at HMP Bristol.

AND - Solidarity dinner plus talk & film with Ciaron O'Reilly – Sunday 22 March from 6.30pm 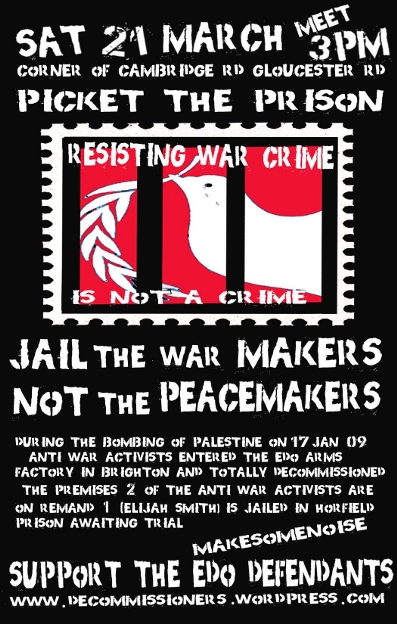 Users of this site will be familiar with the inspiring resistance of the EDO decommissioners. On January 16th the 6 Bristol EDO Decommissioners broke into the EDO MBM ITT complex in Brighton, and disarmed the factory that was making vital component’s for the Paveway bombs and the bomb release mechanisms for F15’s and F16’s warplanes. These components were essential for Israeli war crimes, they caused £300,000 worth of damage trying to protect innocent people’s lives in Gaza, Palestine. EDO MBM have joint contracts with Raytheon for the Paveway Lazer Guided Bombs, they and the British government should be brought to account for aiding and abetting war crimes in Lebanon and more recently Gaza.

This event is an act of solidarity with all the EDO Decommissioners awaiting trial, but especially the 2 defendants remanded in prison since January 17 2009. Of these 2, one Robert Alford remains in HMP Lewes in Brighton, whilst the other Elija (James) Smith), is now held at HMP Bristol.

They are political prisoners, found guilty by the state and their freedom removed. They have had no chance to put forwards their defence that they acted to prevent greater war crimes occurring, namely the bombing of civilians in Gaza by the Israeli state. So much for defendants being innocent until proven guilty! British justice, what a joke.

To demonstrate our solidarity we shall meet at 3pm on the corner of Cambridge Rd/Gloucester Rd (A38) in Bishopston, Bristol BS7 and hand out info about the case to passersby. We shall then move of to walk around the prison, after prison visiting hours have ended at 4pm.

Please bring flyers, banners, placards, whistles, drums etc so that Elija can hear us outside.

Solidarity with all EDO Decommissioners defendants.
Free the EDO 2
Resisting capitalism's war crimes is not a crime
Free all political prisoners

Kebele is hosting an awareness-raising evening in solidarity with the decommissioners. This solidarity is particularly important given the situation the defendants find themselves in. Dinner from 6.30pm, Ciaron's talk at 7.30pm.

In support of the decommissioners, Ciaron O'Reilly will relate his experiences resisting war and violence around the world. Ciaron is a long-time war-resister and anarchist. During the 1991 Gulf War, O'Reilly was a member of the 'ANZUS Ploughshares' group which attacked a B-52 Bomber which was on 20-minute scramble alert, at Griffiss AFB near Utica, New York. Their actions put the aircraft out of action for the next two months at the height of the US bombing campaign in Iraq. Together with the other members of the group, he was arrested and sentenced to 13 months in the US penal system. See

On July 5, 2006 O'Reilly went to trial at Ireland's Four Courts for disarming a US navy warplane at the civilian Shannon Airport, in the early hours of February 3 2003. This group action became known as the Pitstop Ploughshares. O'Reilly and four others, Deirdre Clancy, Nuin Dunlop, Karen Fallon and Damien Moran were acquitted by an Irish jury on on 25 July 2006.

The film Route Irish tells the story of the resistance to Irish involvement in the Iraq War. The film will show from 8pm. See