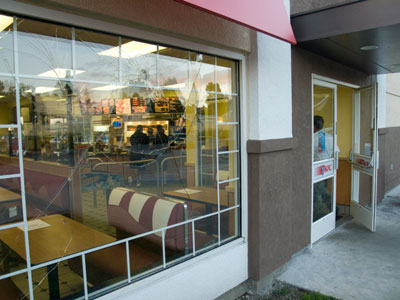 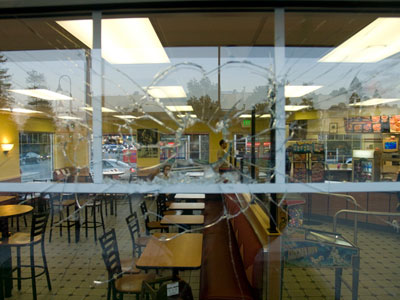 On Friday, March 13 an "Electronic Sit In" began targeting the websites of RMSBG (HLS auditors), Bayer (HLS customer) and one of HLS' own websites.

The sabotage works when a large number of computers continuously load the target website, tying up the website's bandwidth and denying legitimate users access.

"Caught between our fleeting mortal lives and the fleeting 'freedoms' allowed to us by the state, we have felt strong sorrow and disgust at the state of the world and our society. Last night, we decided to make tangible our despair.

Last night, we attacked the Kentucky Fried Chicken on Mission St. We think it's new, we're not entirely sure, but either way the sight of it bores us to death. Two stones cracked two windows and we melted back into the shadows. Property will never be worth more than the lives of living things. Solidarity with our poultry brethren; we may not be the same species, but we breath the same poison air.

We acknowledge that attacks like this do little to actually harm the infrastructure of capital or animal abuse. They are a great way, though, to become familiar with night action. We encourage all who feel a brooding discontent to find ways of expressing it. We cannot wait for a revolutionary situation; we must create that situation. This is just the beginning. We have begun.

yours in long-term low-intensity conflict,
yours for escalation,
autonomous rebels for social collapse"

The Cassinadri family has had a 'job' of breeding and killing mink for years.
Tonight our 'job' was to paintstrip their 3 cars.

Cassinadri... do you really feel safe?

Lovers of night and freedom"

"On March 14 several businesses that engage in animal exploitation were glued and several telephones of the biocidal Telmex company also suffered damage by the Luddites Against the Domestication of Wild Nature.

"Capitalism is the principal cause of the destruction of plant and animal life on this planet, the oppressor and murderer of wild life, exploiter of people, animals and the environment for the benefit of the powerful and the corporations; in Mexico war is declared.

So many hectares of forests and jungles are cleared for the sole purpose of building centers for shopping and tourism, over the dead bodies of the trees and animals they build shopping malls, banks, golf courses, hunting lodges, hotels, all reserved for a small group of filthy capitalists so that they can enrich the base of exploitation.

They deceive the people, saying that this 'progress' will bring more employment; some give in, others resist but in the end are murderers in the place where they were born, where they grew up, where they live.

The powerful have to feel our fury at their properties, in their corporations, in their cars, and even in their own houses; we need to torment them, to remind them of the shit that they do day by day to this beautiful planet where we live, to remind them that while they are sleeping peacefully there are many people who are suffering and surviving the hardships of this system.

For these reasons and more we claim the following sabotages:

Tuesday, March 10, 2009:
- A harmless acid bomb was detonated in a well-to-do area in Mexico City.
- 8 windows at a K.F.C. were smashed.
- The windows and a security camera of a bank were smashed.

The video is called: '19 seconds of social war' and in it we try to show how much can be done in a few seconds of our lives to break with the reality of oppression and exploitation, for a few short seconds, to feel the adrenaline of abolition, for a few moments carrying out the fight against the state and capital.

Social war is not a joke or a fad, but a reality in constant development and growth.

"In the early hours of march the 12th the A.R.O.M.A (Animal Rights One Man Army) went out to the mcDonalds in Deventer (Netherlands).

But once there, the A.R.O.M.A noticed several employees where still working,
at 4 in F*cking morning! What dedication to such a shit job.

A few minutes later after they had all left, moved in again smashing a front window into a thousand pieces.
After a few minutes and not one reaction from nobody, another window was smashed to shit.

A few minutes later the Vigilante Security entered the mc Donalds parking lot.
It was time for the A.R.O.M.A to bail.

CLOSE DOWN!! Next time we will deliver you a MAC-Arson Menu!"

"On March 10, the state and Jaltenco municipal police in Mexico State found on the outskirts of a state police station a bomb with a metal band, cables, batteries and a clock; in order to look at it they fenced off the area believing that the bomb would explode at any moment; in the end they found that it was a false alarm, and that it was accompanied by a message:

'We will burn down the Judicial MP, soon the fire will be for you'

'Vengeance for the animals murdered on the 23rd'