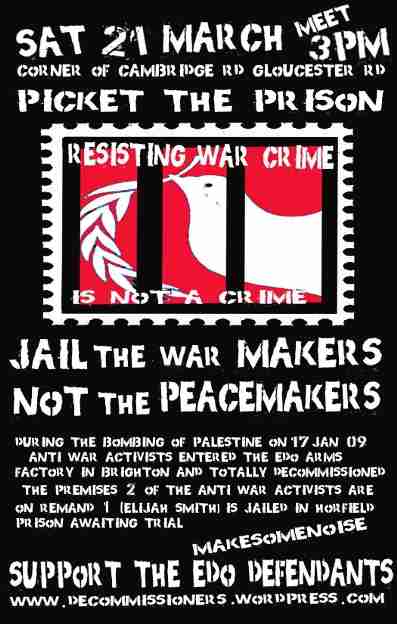 on January 16th they broke into the EDO MBM ITT complex and disarmed the factory that was making vital component’s for the paveways bombs and the bomb release mechanisms for the F15’s and F16’s. These components were essential for Israeli war crimes, they caused £300,000 worth of damage trying to protect innocent people’s lifes in Gaza, Palestine.

The Raytheon 9 did a very similar action causing also £300,000 worth of damage at a Raytheon plant in Derry. On 11 June 2008, by a unanimous verdict of the jury, the Raytheon 9 were found not guilty of three counts of criminal damage at the Raytheon offices, Derry Northern Ireland on August 2006.

“The Prosecution could produce not a shred of evidence to counter their case that we had acted to prevent the commission of war crimes during the Lebanon war by the Israeli armed forces using weapons supplied by Raytheon.” Colm Bryce

EDO MBM have joint contracts with Raytheon for the Paveway Lazer Guided Bombs, they and the British government should be done with aiding and abetting war crimes in Lebanon and more recently Gaza.

Resisting War Crimes Is Not a Crime