Nine people have been arrested under Section 69 of the Criminal Justice and Public Order Act 1994 (failure to leave land after a warning) following this morning's blockade of Tinsley House immigration detention centre at Gatwick airport. Six of the arrestees had locked and glued themselves to the prison's gate to prevent Iraqi refugees from being taken to Stanstead airport to be forcibly deported on a special charter flight to Erbil, Iraqi Kurdistan, later today. All nine have been taken to Crawley police station. They are expected to be released on bail later tonight or remanded overnight and taken to court tomorrow morning. 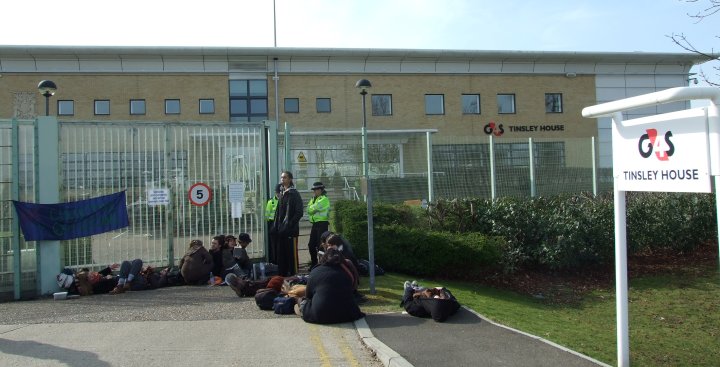 The blockade, which lasted for over 6 hours, managed to prevent a WH Tours couch and G4S vans from leaving the detention centre. Soon after the protesters were violently removed by police, however, a coach carrying between 8 and 12 Iraqi refugees due for deportation left for Stanstead. Others were reportedly taken from Campsfield and Dover detention centres, although some had outstanding appeals and judicial reviews. At least one man won a last-minute High Court injunction and was returned to Tinsley House.

Despite today's 'sad' results, campaigners have vowed to step up their fight against collective expulsions and deportation charter flights. Rich Whitman, one of the campaign group calling itself Stop Deportation, said:

"The fact that the UK government is still refusing to ratify Protocol 4 to the European Convention on Human Rights, which prohibits collective expulsion of foreigners, is very telling about its policy on immigration. Arguing that Iraqi Kurdistan is 'safe' when people are fleeing the region everyday is just silly. Many of those who've been forcibly deported over the last year or so have been killed, committed suicide, or been imprisoned and tortured by the Kurdistan regional government or Islamist groups."

Iraqi Kurds who have been deported back to Kurdistan over the last few months, and their families in Kurdistan, have recently formed a Deportees Committee to resist forcible deportations to Kurdistan. A demonstration was held last Sunday in Sullaimaniyyia, northern Iraq, to protest against the Kurdistan regional government's complicity in EU's immigration policies. Dashti Jamal of the International Federation of Iraqi Refugees (IFIR), who was present there, said:

"These people clearly did not want to return. They had lives back there [in the UK]. Some of them had left their families behind and may not be able to see them again. Many feel unsafe and some have had to change their names or move somewhere else under very difficult conditions to survive. Surely this this is not what I would call 'safe'."

2. The Home Office has been chartering flights from companies including Hamburg International and Czech Airlines to deport people en masse. Deportees are not told the date or time of the flight's departure. In previous flights, people have been deported before their solicitors have had a chance to appeal or submit judicial reviews. Each deportee is handcuffed and accompanied by two security guards. The total cost of the flights are unknown, though it is assumed to be significant. The Home Office constantly refuses to release such information as it may apparently be 'commercially sensitive'.

The charter flight landed in Sulaimaniyya, northern Iraq, with approximately 60 people on board. At least two people had won High Court injunctions and were taken off the flight.

All 9 arrested on the action were released on bail between 9pm and 2am. Their bail conditions include keeping away from Sussex, all UK airports (except for pre-booked flight) and all UK Border Agency facilities (detention centres, reporting centres etc.). They are due in court on March 30th.