Last Friday evening, two dozen activists entered the offices of Minister for Immigration and Borders Phil Woolas in Oldham, ‘detaining’ him for about 30 minutes. The campaigners included members of No Borders Manchester, No One Is Illegal and the Anarchist Federation . The action intended to mirror the government’s practice of detaining migrants in ‘immigration removal centres’ without trial or sentencing, for indefinite periods of time. This was the second time since his appointment last year that the immigration minister has become the target of an action by No Borders, after a member of the group pushed a custard pie in his face last October .

On Tuesday morning, 20 anti-deportation campaigners blocked access to the Tinsley House immigration detention centre near Gatwick airport. Activists used d-locks and superglue to blockade the entrance gate for several hours. The action aimed to prevent the forced deportation on a charter flight of approximately 50 Iraqi refugees from the UK.

Groups affiliated to the UK No Borders network are now calling for demonstrations against immigration detention on Saturday 21st March. A protest march will lead from Bedford to the Yarl’s Wood detention centre, which was half destroyed by fire in 2002, following an uprising ignited by the ill-treatment of a sick woman by guards. Transport is available from London. Solidarity demonstrations are planned in Manchester and Edinburgh. The demonstration in Manchester will be going to the newly-expanded ‘Pennine House’ detention facility at the airport. The campaign to close this prison has achieved a high profile recently after the invasion of Phil Woolas’s offices and an intervention during a speech by Manchester City Council leader Richard Leese. In Edinburgh, campaigners will picket the private security company G4S. G4S profits from running immigration prisons in the UK, including Brook House, Dungavel near Glasgow and Pennine House. 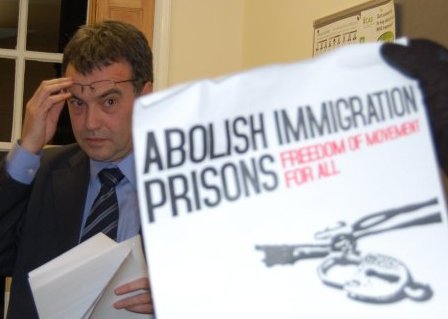 Every year up to 30.000 innocent people including 2,000 children are detained arbitrarily and indefinitely in the UK under immigration powers, in purpose built prisons for migrants. Torture and rape survivors are routinely detained, so are pregnant women and people who have or develop serious illnesses and mental health problems. 2,500 people are currently locked up in 10 British immigration prisons, 7 of them owned and managed by private companies. There are also a number of ‘short-term’ detention centres at British ports and airports. Phil Woolas is seeking the expansion of the detention estate to 4,000 spaces. Brook House, a new immigration prison at Gatwick airport has opened this month and there are plans to build another ‘mega’-detention centre near Bullington, Oxfordshire.

Fires, riots and hunger-strikes in protest at appalling treatment and conditions are such a common occurrence in British detention centres that it would be impossible to document them all. Many protests have also highlighted racism and violence from guards, obstruction of asylum claims, attempts to isolate people from outside support and targeting of so-called ringleaders. Similar conditions can be found in detention centres across Fortress Europe, with the recent destruction by fire of a centre in Lampedusa, Italy, grabbing the headlines.

Abolish Immigration Prisons!!
Freedom of Movement for All!!

Thousands of asylum-seekers are currently being kept in prisons throughout
the UK. They haven’t committed a crime, but they can be imprisoned
indefinitely. On Saturday 21st March, we are calling for a demonstration
of all those who want to see an end to all immigration detention.

2,500 people are currently locked up in 13 British immigration prisons.
Phil Woolas, the minister for immigration and borders, is seeking the
expansion of the detention estate to 4,000 spaces. 30,000 people pass
through one of those prisons every year, including 2,000 children. All are
held for indefinite periods without trial or sentence.

Some of these people are imprisoned in Pennine House, the immigration
prison located airside at Manchester Airport in Terminal 2. Pennine House
can now hold up to 32 detainees, double its previous capacity. As a
so-called residential short-term holding facility, it can hold people for
up to seven days until they are released, deported or transferred to other
‘long-term’ detention centres.

Meanwhile, Phil Woolas’ office in Oldham is only a few miles away. And
while hundreds of innocent people are kept in prison with no knowledge of
when they will be released, he continues to make xenophobic and
nationalist statements at every opportunity.

Phil Woolas may be trying to undermine the BNP, by demonstrating that New
Labour are equally capable of using racist and xenophobic rhetoric.
However, in using many of the same arguments as the BNP does, Woolas is
actually lending them credibility. The only way to fight the BNP is by
completely rejecting the nationalism and xenophobia promoted by the
government.

Once it becomes acceptable to imprison someone arbitrarily and
indefinitely, we are all at risk of suffering the same fate. We can
already see this with Woolas’ determination to bring in ID cards for
everyone and to monitor and retain all our cross-border movements in a
secret database in Wythenshawe.

This is why activists from Manchester No Borders attempted to check Phil
Woolas’ passport at a public debate last October, and when he refused this
landed him a custard pie in the face.

The story so far…

Pennine House closed for expansion in spring last year. From when we could
expose Carillion plc as the construction company to expand the prison, No
Borders put pressure on this detention profiteer, forcing them to step up
security at their Manchester office. Unfortunately, Woolas could re-open
the prison last December.

Earlier this month, we took the issue directly to Manchester City Council
leader Richard Leese, who is also the Chair of the Committee for the
Shareholders of Manchester Airport. When 100 jumpers were dumped in front
of him and information leaflets handed out to the audience, he was visibly
embarrassed to continue his presentation of Manchester as a cosmopolitan
and inclusive city.

And last Friday, in the most high-profile action against Pennine House so
far, 20 activists were able to enter the office of Phil Woolas and to
'detain' him symbolically for 30 minutes until police officers could
'free' him.

On Saturday 21st March, we will reiterate our demand of the immediate
closure of Pennine House and all immigration prisons, and that everyone be
free to come and go as they please, regardless of the country of their
birth.

Join us for a rally at noon in Albert Square outside Manchester Town Hall
with speakers from No Borders, the Anarchist Federation Manchester, No One
Is Illegal, the Manchester Committee to Defend Asylum Seekers, and other
groups.

Mass Bike Ride from Albert Square to Manchester Airport (should take about
90minutes); or join others on the train (funds for train fares will be
available for refugees and asylum seekers).

Jumpers for the council leader

Keep up to date