Things turn nasty for the Tesco 2

The 'Tesco 2' Dee Murphy and Greg Wilkinson began a campaign to boycott Israeli produce by going into their local Tesco store filling up a trolley with dates grown on illegal settlements in the West Bank, walking out without paying, tipping the dates on the ground, smearing them with red dye and then waiting for the police to arrest them. Dee was arrested and is due to appear in court in early April. For reasons best known to themselves the police did not arrest Greg at the time, but things have taken an ominous turn. This is the e mail I received from Greg on March 12th 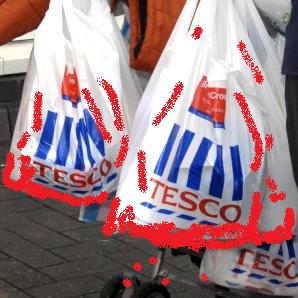 Police raided three houses yesterday and arrested two people - including me - on suspicion of 'conspiring to commit racially aggravated criminal damage.' They seized three computers and a lot of papers relating to Palestine/Israel affairs. They've kept my computer, which may mean they pick up some email addresses. Luckily the papers with addresses and phone numbers were out of the house by the time they searched it.

So what was all that about? It took us some time to realise that the police, in several vans and cars, were from Bridgend, not Swansea. Apparently there was a minor incursion at the Bridgend Sainsburys, during which a couple of boxes of Israeli peppers were sprayed with red paint and a 'Boycott Israel' slogan spray-stencilled on the floor. The police, or whoever set them up, took the word 'Israel' as racist, and it was assumed that the Bridgend and Swansea actions were co-ordinated, or conspired, by some sort of organisation or command.

I'm angry, as is my wife, at the racist slurs, because about ten policemen and women spent a couple of hours going through every nook and cranny of our house, and because I was arrested and whisked away to a police cell in Bridgend - as was a woman who was with me leafletting outside the Swansea Sainsburys last Saturday. D Murphy, already charged over an earlier acton at Swansea Tescos, had her house raided, but happened to be out. The police sent to her house then came on to ours - nowhere else to go in Swansea and nothing else to do - which was why we had about ten of them bustling through our rooms and, protected by their little disposable blue rubber gloves, through our drawers,bookcases, filing cabinets etc. They took away Ada's craftknives and cutting boards, in case they might have been used in cutting stencils and seemed very interested in red paint - though the only red paint we had was emulsion, not much good for spraying. They also asked me about what they described as a 'list of chants' which they assumed I had composed. At first I couldn't think what they were talking about, but later remembered that I'd jotted down some of the rhymes being shouted by a little group of Muslim schoolgirls at a Gaza protest demonstration in Swansea: 'Stop the killing, stop the crime, free, free Palestine…. From the river to the sea, Palestine will be free.'

Other things that annoyed us: a policewoman running into the house without so much as a knock or introduction and asking 'Can I use your toilet,' but seeming quite put out when I answered 'Yes, if you get my computer back.' Now we have no list of what has been taken away, and will only find out as we come to look for this or that. And the police at Bridgend who offered me a phone call to my wife, to say where I was and when I might be back, but then refused to let me ring her, because they were too busy. They also failed to tell me that my solicitor had rung, so when it came to my recorded interview, and they asked if I wanted a solicitor, I said not unless I was charged: I was anxious to save time and not bring the man all the way from Cardiff. When I was asked about medical complaints and drugs, I mentioned a muscular condition, and a detective sergeant I'd talked to earlier said 'muscular stiffness'. 'Viagra, is it then?' quipped the desk sergeant. All I said at the time was 'Nothing that localised, I'm afraid.' But now it seems to me that sort of crack might have been uncalled for from a position of power.

Most of all I'm angry because I've lost my computer and everything on it for what could be months - we're bailed until June 4th - and because all that waste of time and energy could have been saved if one or two CID people had come to the house and asked the obvious questions. We could have established in a few minutes

1. That the use of the words 'Israel' and 'Israeli' is no more racist than the use of, say, British, in relation to invasion of Iraq or Aghanistan;

2. that no conspiracy exists or is needed to explain the use of red paint in boycott gestures here and there in South Wales - especially since the Swansea action was so widely publicised in local press and online;

3. That raids and searches, involving at least 20 police and guards on that one day alone, were a gross waste of police time and public money, not to mention infringement on civil liberties.

On the other hand, most of the police and Group4 guards were friendly enough, and the house was left more or less tidy - not like the trashed interiors of Palestinian homes after raids by the IDF.

Still, question remains who authorised this disproportionate use of police power and numbers - thousands of pound worth of public money to get to the bottom of a box of Israeli peppers and some graffiti on a Bridgend floor?

This development shows two things:
1. the campaign to boycott is beginning to bite and the Zionists have been panicked into a hasty and counterproductive response.
2. Things are going to get much rougher from now on.