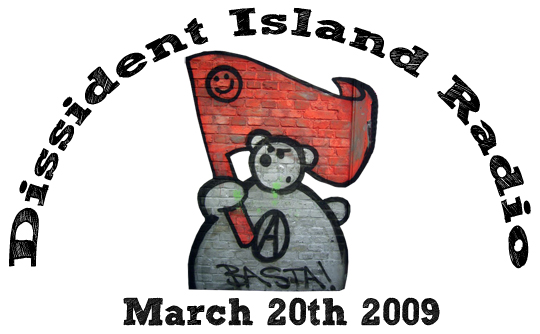 This Friday, March 20th, we're welcoming a wide range of characters on the show. In anticipation of the festivities on the 1st and 2nd of April we've got Larry Lohmann from the Corner House on to discuss carbon trading, we've got Emily from FITwatch on to talk about ways of keeping yourself entertained, and we've got andy from the legal defence and monitoring group on to chat about getting in trouble.

We've also got a report back from the Smash Miss Contest action as well as a quick update from Feminist Fightback about the week of action against the welfare abolition bill.

The show'll be topped of with Mr Braincell spinning some punk tunes for us,

On this show we talked to the London Coalition Against Poverty about the upcoming week of action against the Welfare Abolition Bill. We also chatted to Climate Rush about their recent antics, we also talked to Wietse, freshly ashore from his Sea Shepherd journeys to tell us about the campaign and the important work being done to protect and conserve the world's threatened marine wildlife...

To end, some IDM 8-bit dubstep from Dj Fe_Bac to get you jumpin' like an italian plumber from the mushroom kingdom.