BP has been forced to postpone its centenary party at the British Museum
on April 1st, as word had leaked out and triggered a demonstration by Art
Not Oil(1). 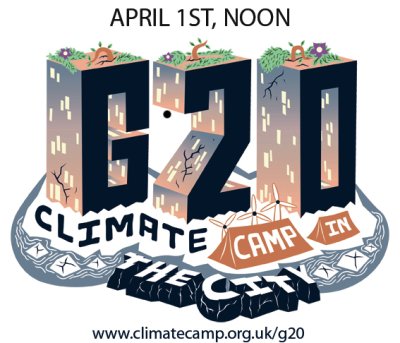 BP had either failed to notice – or decided to ignore – the fact that
April 1st had been designated ‘Fossil Fools Day’(2) by the international
Rising Tide network(3). Also, there are several protest events planned for
that day in reaction to the G20 meeting, including a ‘Climate Camp in the
City’(4), all of which meant the BP demo was too much of an unknown
quantity not to attempt to avoid.

‘Whenever and wherever BP attempts to hold a party to celebrate its
tarnished centenary, we will be there to say ‘Your party’s over!’ said Art
Not Oil’s Sam Chase. ‘BP’s one hundred years have seen a world plundered
and a climate torn asunder. We cannot allow that to continue, so we are
resisting Big Oil’s empire of carnage while building our own post-oil,
post-capitalism future right here, right now, with our creativity, our
tenacity and our humanity.’

‘Any company that can boast that it's replacing “2008 oil production by
121% and aims to grow annual output through to 2020”(5) needs to be
decommissioned forthwith, if we are to have a chance of avoiding climate
catastrophe in the not-so-distant future. Fortunately, Art Not Oil is not
alone in working for this to happen, as movements of resistance gather
strength all over the world.’

Art Not Oil has pledged to be present at BP’s AGM on April 16th to make
sure it gets this message, and to wish its employees well in their new low
carbon, post-corporate careers.

(1) Art Not Oil stands for 'creativity, climate justice and an end to oil
industry sponsorship of the arts', and is part of Rising Tide UK. Look out
for its 2010 desk diary!

* In 2007, BP bought 50% of the Sunrise oil tar sands field in Canada, the
most energy-intensive fossil fuels to bring to market, even before
burning. ‘Fund managers attack BP over tar sands plan’, Times, 18.4.08

* ‘Exposed: BP, its pipeline, and an environmental time-bomb’, Independent
(26.6.04) on BP’s Baku-Ceyhan oil & gas pipelines, which will produce over
150m tonnes of CO2 each year for 40 years, causing untold damage to the
world’s climate; baku.org.uk

* ‘BP doubles corporate ad budget in $150m bid for greener image’, Times,
28.12.05; BP invests 2.6% of its annual budget in solar & other renewable
energy sources, much less than it ploughs into advertising and PR like its
sponsorship of the Tate, NPG, NHM etc.

* ‘BP and Shell have discussed with the government the prospect of
claiming a stake in Iraq's oil reserves in the aftermath of war.’
Financial Times, 11.3.03.