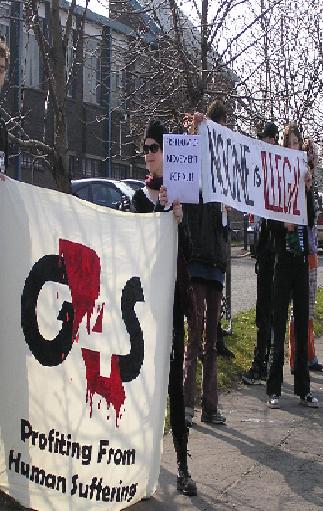 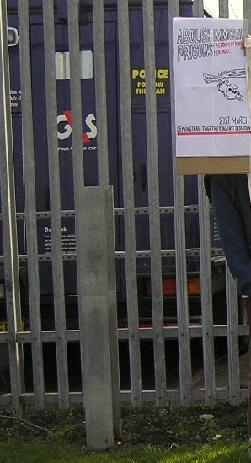 As part of the UK-wide Day of Action Against Immigration Prisons, a picket was held at the offices of G4S in Edinburgh, in solidarity with protests taking place at Yarl's Wood, in Bedfordshire, and Pennine House in Manchester. G4S is one of the largest private companies involved in the border prison industrial complex, running five immigration prisons in the UK and many more around the world at a considerable profit. G4S run Brand Street Reporting Centre in Glasgow, where there are weekly protests against the criminalisation of people seeking safety in Scotland, as well as having contracts from the Home Office to transport immigration detainees in the UK, and to run holding prisons in Coquelles and Calais. G4S profit from the border regime worldwide.

“Outsourcing Abuse”, an investigative report by Birnberg Peirce & Partners, Medical Justice and the National Coalition of Anti-Deportation Campaigns found an alarming number of injuries sustained by asylum deportees at the hand of private escorts, including G4S, contracted by the Home Office, over the last 4 years.

No one should be imprisoned for trying to seek a better life for themselves and their families. As if that wasn’t bad enough, it is shocking that the conditions under which people are held are scandalously poor, and that private companies like G4S profit from human suffering and the repressive border regime.

Some other upcoming events in Scotland are:

with this picket the connection between detention, woolas and profiting companies was really drawn