News from Greece may be being whitewashed out of the mainstream media, but its still going off big time over there, and the European bosses and politicans remain terrified its gonna go off in their countries soon.
So its all going a bit Greek in Bristol this weekend:
Friday 27 March, 7.30pm at Kebele social centre - Greek Revolt Info Tour
Saturday 28 March, 8pm to 2am - Bristol's Big Greek Benefit - Viva La Resisdance 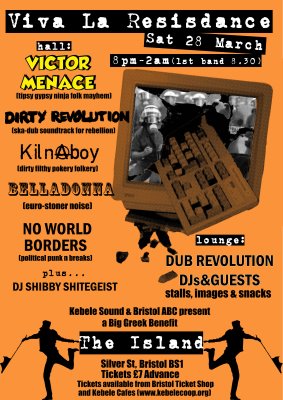 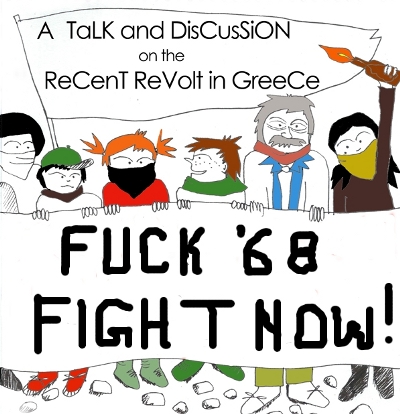 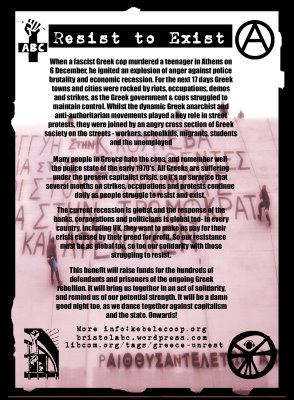 Hear eyewitness speakers, plus discussion:
On the events of last December & January, when anger exploded onto the streets after a fascist cop shot dead a teenager in Athens.
On the ongoing battles this March of workers, students, migrants, unemployed and squatters.
Updates on prisoners and defendants; the campaign around K Kuneva, migrant union activist attacked with acid; latest occupations and street battles; and how the resistance is fighting back and organising.

After 17 days of street battles last December after a fascist cop shot dead a teenager, the situation in Greece remains very tense. Some say it is similar to Italy in the 1970’s, with strong social and worker movements facing a tooled up state working in collusion with fascist paramilitarist groups, whilst in the shadows operate alleged armed groups with sometimes questionable loyalties. In the midst of a growing economic crisis, and against a historical Greek background of police brutality and military coup, Europe’s ruling class watches Greece nervously, whilst radicals everywhere can learn much from the movements involved in the struggle as we face our own struggles.

Kebele Sound, Bristol ABC and friends present a Big Greek Benefit for defendants and prisoners of the ongoing Greek rebellion.

Background info & useful links:
In Bristol the Bristol ABC group and the Bristol Bookfair Collective have posted various articles, see for example 'How to organise an insurrection (in Greece)' at

http://libcom.org/tags/greece-unrest - news posted from Greece, with latest news at

http://athens.indymedia.org/?lang=en - under state attack
For a brief roundup of a typical week (9 to 13 March) of struggles in Greece see here:

http://libcom.org/news/riots-athens-salonica-solidarity-anarchist-trial-13032009
See this film online for a taster on Greece: The potentiality of storming heaven: