A march for Jobs, Justice and Climate headed across London on Saturday 28th as part of a global campaign to challenge the G20 ahead of the summit taking place on April 2nd. About 40,000 people braved the cold weather from 11am until 5pm and marched from Victoria Embankment via Westminster to Hyde Park for a rally.

Timeline of march (and international reports) 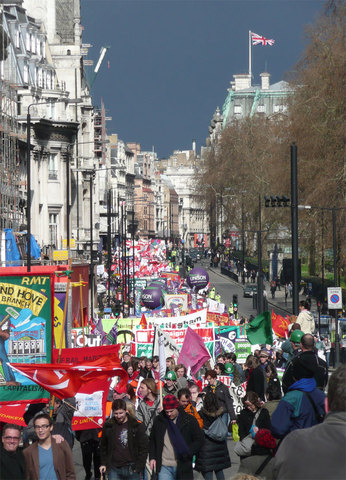 Germany:
People took to the streets in Berlin and Frankfurt today. Reports say the the march in Frankfurt was 15 000 strong and the 25 000 people strong march in Berlin was attacked by police in the end, with several protesters hurt and arrested. Feature [de] | Videos: 1 | 2 | On the 3rd and 4th of April - right after the G20-meeting - a meeting of the NATO members is taking place for NATO's 60th anniversary in Strasbourg, France, and Baden-Baden, Germany.

Spain:
Around 10,000 people took to the streets in Barcelona, and several thousand in Alacant and Valencia. Other demonstrations took place in Madrid [more], Sevilla [video], and Salamanca.

Switzerland:
Around 250 people marched in Geneva following a banner reading "Capitalism is a mistake".

Austria:
In Viena [more] around 7,000 people marched with banners reading "We won't pay for your crisis" and "Capitalism can't be reformed".

6am -  The occupation of a building to be used as antiG20 mobilization convergence space is announced.

11:30am - Reports of a growing Direct Action/Militant Workers bloc including IWW, NoBorders, LondonAnarchists, Antifa - with Samba band and huge 'Freedom' and 'Solidarity' banners - becoming the focus of estimated 15 FIT and 3 vans of police.

Front of march consists of national and international unions including Unison, French and Spanish trade unions with colourful banners, and SOAS SU.

12.15 - First photos of the march published on Indymedia UK.

12.45 - The front of the March has already reached Trafalgar Square with still more arriving at Victoria Embankment.

13.30 - Direct Action Militant Workers block now estimated at around 1000 people. Still cordoned each side by cops and cop vans.

14.30 - The march seems to have split in two along Picadilly with a line of cops walking in front of G20Meltdown/Direct Action bloc. Militant workers bloc banners include 'Can we overthrow the government? Yes, we can!'

Second half of march - behind 'Capitalism Isn't Working' banner - now at Park Lane where cops are redirecting people straight into the park.

The rally is under way with speakers on stage, and some Direct Action bloc autonomous speeches st Speakers Corner. No cops in the park now.

Speakers corner speeches now joined by a soundsystem, and about 100 people.

16.20 - Many people have left because of the rain, but speeches and music continue on stage and at Speakers Corner.

Report of one arrest: at Speakers Corner.