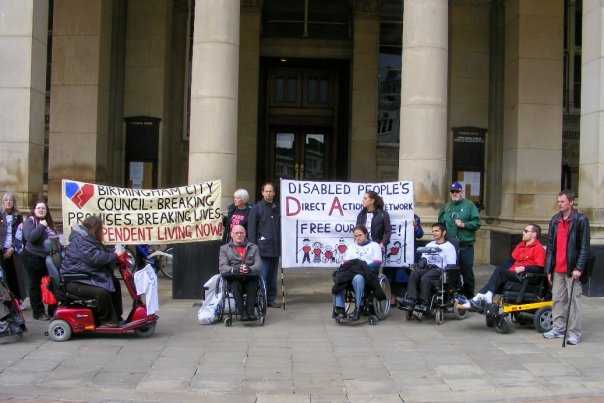 activists assemble at the Council House 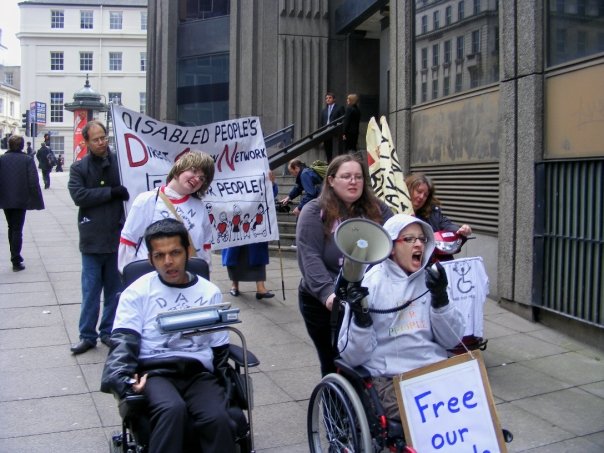 when we are under attack, disabled people fight back! 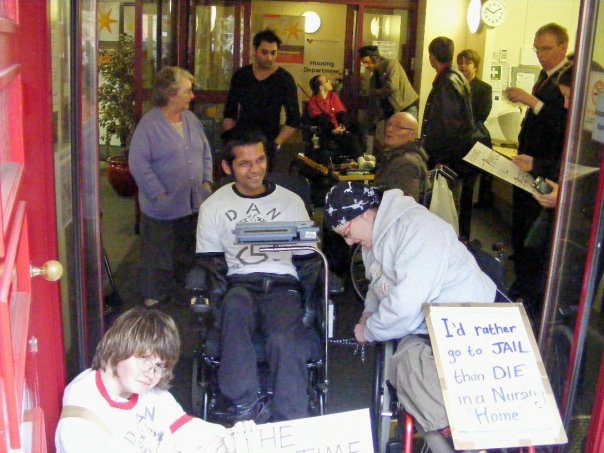 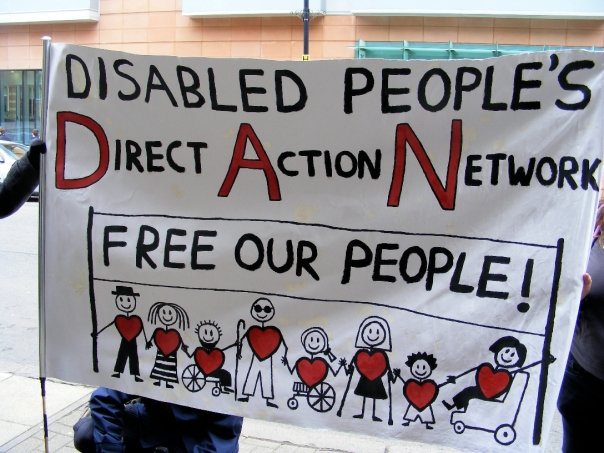 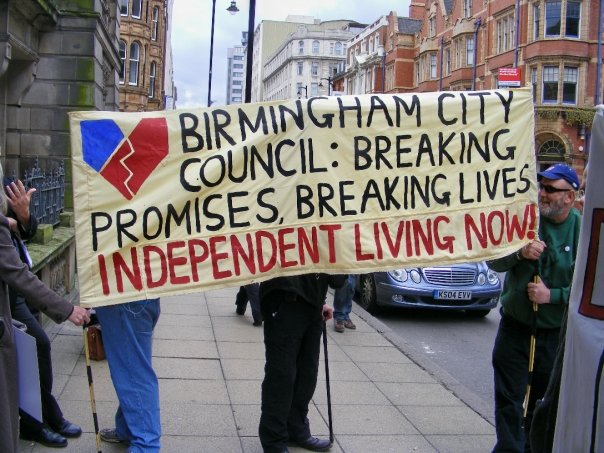 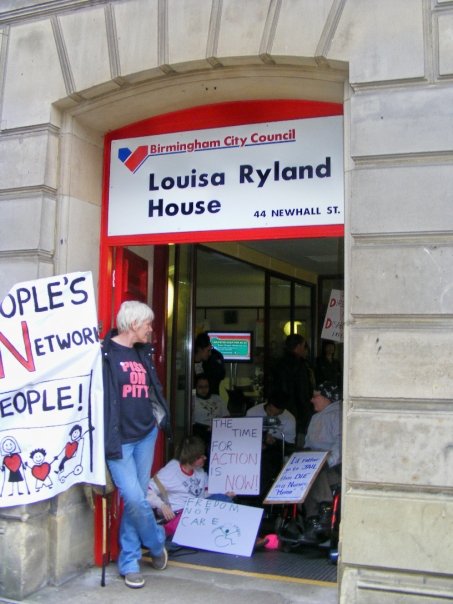 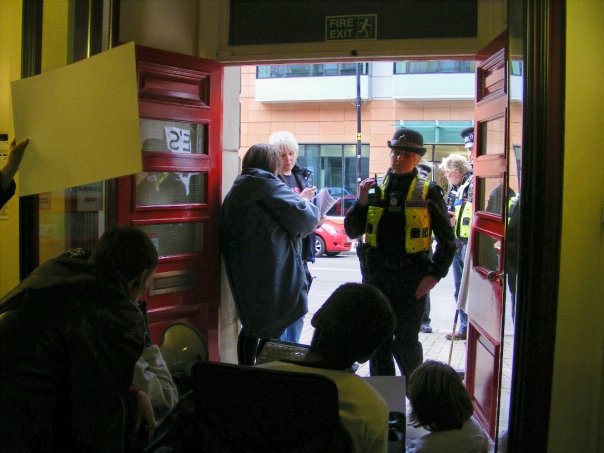 Around 20 activists, who had come from as far afield as London, Leeds and Manchester, marched from the city centre (pausing only for a photo opportunity outside the Council House) at 1pm, chanting slogans such as "What do we want? Freedom! When do we want it? Now!" and "I'd rather go to jail than die in a nursing home". Despite the fact that an article about the action had already appeared in that morning's Birmingham Mail, Louisa Ryland House were totally unprepared for the invasion, with not even security guards initially present when DAN entered, chanting "Business as usual - ain't gonna happen!"

We occupied the lobby and blockaded the entrance with 2 wheelchairs chained together (with banners and people handing out leaflets to both council workers and passers-by outside in the street) for about 2 hours before any police turned up - initially it was a pair of "Community Support Officers" who essentially said they agreed with us and walked away, then about half an hour later the actual West Midlands Police came, but were very clearly totally unprepared to arrest a group of disabled people, repeatedly warning us that we were breaking the law (er, we knew that) and that if we stayed we would be arrested... however, they didn't seem to want to get round to it...

(One officer did tell us that it would be "zero tolerance" if we did it again... not quite sure if that's believable! Also amusing was the guy with a huge pair of bolt-cutters who BCC security called in, who essentially took one look at the small and flimsy-looking yet effective chain and left proclaiming it not worth calling him out for...)

At around 4pm, after the police had told him about our protest, BCC's Director of Health and Social Care Peter Hay actually came out to meet us (the other councillors and executives we addressed our demands to were apparently still in their "important meetings"... presumably deciding just how little of their 2009 budget they could get away with doling out to disabled people), and after some negotiation we secured a meeting with him and other representatives of his department on Friday 3rd April, as a result of which we decided collectively to call the occupation off and retire happily to a local accessible pub.

Birmingham DAN know many disabled people who are literally unable to leave their houses (if they are lucky enough to be housed at all) and living in squalor and hopelessness without the assistance needed for the most basic of daily tasks (such as cooking, housework, and in some cases even dressing and showering) and, even when supposedly having "independent living", lacking any meaningful choice and control over our own lives. We demand true independent living (as defined according to the Social Model of Disability, meaning not "doing everything for oneself" but "having control over one's own life") and self-determination for all disabled people under the principle of "Nothing About Us Without Us"!

The Birmingham Post and Mail (2 local papers owned by the same company) both covered us, with slightly different photos and stories, but the latter printed the ludicrous claim on behalf of Birmingham City Council that “We’ve always maintained we are happy to meet with DAN representatives and discuss their concerns.” - well, if that was the case, we wouldn't have had to take direct action, would we?

BCC also exposed just how far they are from reality by openly admitting to the press that "the average waiting time for priority [housing] adaptations is 58 weeks" (yes, over a YEAR), as if that was something to be proud of... what planet are they on?

It remains to be seen what, if anything, will come of the meeting between DAN and Birmingham City Council on Friday, but we will assure them in no uncertain terms that if they continue to fail to meet their legal obligations to accessibly house and grant Direct Payments to disabled people, we will be back!

These issues are not just present in Birmingham but nationwide. After a relative absence for the last few years, DAN is rising up again to highlight and bring to an end these injustices. "When we are under attack - disabled people fight back!" Councils, charities and any other organisations which oppress disabled people around the country - watch out for forthcoming DAN actions near you...