APRIL 1: Montages from the day, interviews with the Whitechapel Anarchist Group, participants in the 'Black Horse', and child space. Sounds from the G20 Critical Mass and trying to communicate with the cops. Dubstep and reggae from Delsa to finish 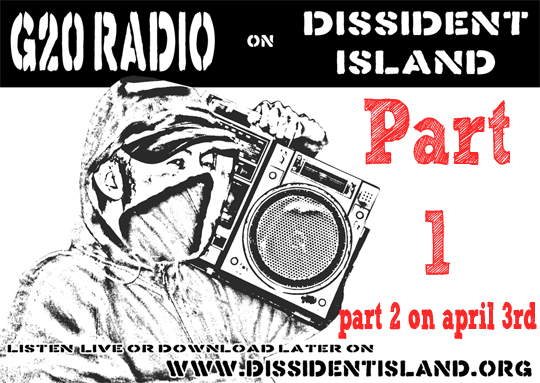 Part one of our G20 coverage. During the course of the day we went out and recorded on the streets as well as interviewing people in the studio and over the phone. The show starts with a little montage from the afternoon featuring voices and sounds from the Camp in The City as well as happenings at Bank.

We than had the Whitechapel Anarchist Group (the "notorious W.A.G.) in the studio explaining how they saw the day's protests. Next we had coverage of the child space for activist kids, the G20 Critical Mass, and a little piece on trying to get some sort of information or comment from the police.

Our last 2 bits were an interview with our friend Kirsten about the nature of the 'Black Horse' march, followed by John's montage from later in the evening when things had begun to take a nasty turn and police dogs were on the loose. Delsa popped in after this to spin some sweet reggae and dubstep tunes, not to be missed.

For this show we welcomed a wide range of characters into the studio. In anticipation of the festivities on the 1st and 2nd of April we had Larry Lohmann from the Corner House on to discuss carbon trading, we got Emily from FITwatch on to talk about ways of keeping yourself entertained, and we talked with andy from the legal defence and monitoring group on to chat about getting in trouble.

We also had a report back from the Smash Miss Contest action as well as a quick update from Feminist Fightback about the week of action against the welfare abolition bill.

Mr Braincell had the last laugh with his unorthodox punk set