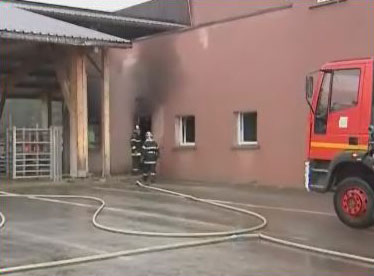 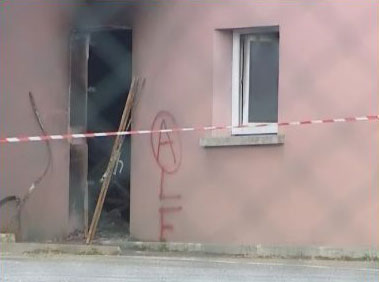 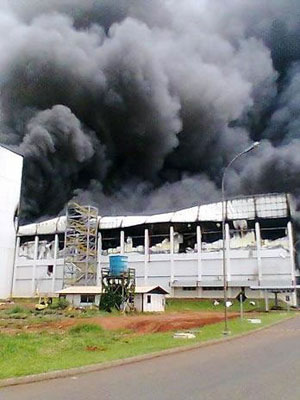 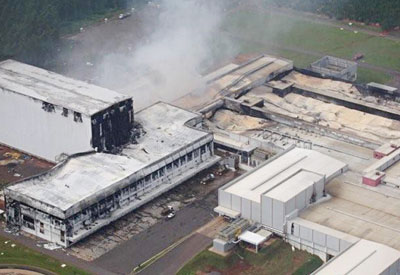 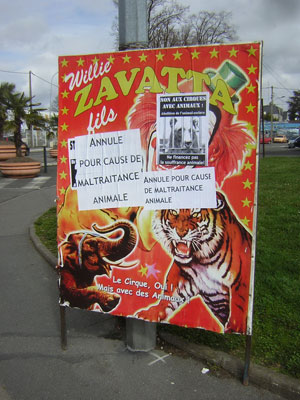 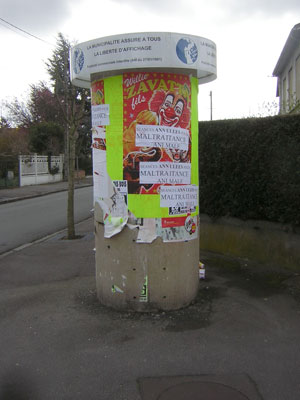 Early in the morning on Saturday, March 28 a fire broke out at Marché au Cadran d'Ussel, a livestock auction in the commune of Ussel (Corrèze). The initials 'ALF' were found painted on the building. Future auctions have been cancelled. (photos from france3.fr)

On the morning of March 21, a fire broke out at a massive slaughterhouse operated by the Perdigão company in the city of Rio Verde (Goiás state). Nobody was hurt in the fire. The slaughterhouse, one of the largest in Latin America, has the capacity to kill over 2 million birds and 25,000 pigs a week.

Although the cause of the fire is still being investigated, the Ativismo activist collective received a message from the ALF claiming responsibility (rough translation):

"After more than one year of study and planning and a few weeks surviving in the harsh reality of a slaughterhouse that kills 500,000 birds a day, we reached our goal. The theft of 500,000 lives, stolen as a result of corporate greed and consumer ignorance, stopped, even if only temporarily.

You can blame us for putting at risk the lives of workers, but our action was as efficient as our planning, preventing any loss of human lives.

You can say that this will affect the economy and the families of farmers and workers, but what we did was save the lives of 500,000 birds for each of the nine days that the factory was out of operation.

You can invent a cause and argue that the fire was not an act of sabotage, but what matters is the result and nothing more. If we were interested in recognition for our actions, we would not be a group that operates in anonymity.

You can increase your security, but you will never be sure that you're safe. We have made sure that the doors will always be open for those who have a good reason to enter.

You can not hide and you can not stop us (this was only the beginning).

We are scattered all over the world and act independently and decentralized. This means that whatever happens, you will never prevent us from action; to prevent an individual will not prevent others.

For those who do not know, the ALF is considered the number 1 terrorist threat in the USA. Our actions aim to destroy the companies and individuals who profit from farming animals and to expose the reality that is hidden from the population.

We are very pleased with the result, despite having been forced to delay the date of our action one day later than planned, because March 20 is celebrated throughout the world as a day without meat. This was our way of commemorating the date, but that's not all. During the weeks we had the privilege of being inside this company (you can look, you will not find us), we had the opportunity to document some facts with photos, videos and photocopies, which will be released to selected institutions at the appropriate time.

Today and always, we strive to live in freedom.

This action took place in solidarity with activists who recently paid a visit to Fred Goodwin. We are all too familiar with those who lavish and profit from the suffering and misery of others."

*Following the attack, the restaurant took foie gras off its menu.

"The pastuer institute of montevideo is one of the main laboratories in Uruguay that practice vivisection, in addition to performing experiments with rodents to create so-called transgenic animals.
In the early morning hours of Monday, March 23 the walls of the premises were painted ('no + vivisection' and 'pasteur = torture') alluding to the authoritarian activities that are carried out there; in addition the walls were smeared with red paint, representing the blood of the tortured animals on the inside, and then the wheels of a car that was by the wall were set on fire.

Throughout the week, from the 23rd to April 1 the pasteur institute will be offering a course in biomedicine to other vivisectors from around the world; this is a call to all those who wish to see all the cages empty, destroyed, and in flames and a warning to all those who profit from vivisection.

"In the early morning of march the 30th the A.R.O.M.A (Animal Rights One Man Army) moved in on the MCDonalds in Deventer (Netherlands) again.

Since the Mc-Arson-Menu they ordered was not ready yet we delivered them a nice window smashing for starters. The main dish will be coming soon!

The windows that were smashed were also the MC-Drive window. This might seem like small-time damage but if you think about it; They now have to either cover up those windows to prevent cold from coming in and costumers getting angry. That way they can't use the MC-Drive until the windows are replaced. The only thing they can do is to not cover up the windows and turn up the heater which will cost them extra money as well.

"Angela Beer is what passes for a fashion boutique amongst sick individuals who like to wear the fur of tortured animals. On a recent evening we took a can of spray paint and left some fairly definitive suggestions to what action the store might like to take to make us go away.

This morning no doubt they had donned the marigolds and were busy scrubbing everything from the shutters (such a shame) to the walls and plant pots.

"In the night between March the 26th and 27th the A.R.O.M.A (Animal Rights One Man Army) went out again.

This time a company that produces Cow Torturing Machines, also known as Milk-Machines. They are designed to suck out the milk and life of mother cows.
MILK BELONGES TO THE CHILDREN OF THE MOTHERS!

The A.R.O.M.A smashed 6 windows of their entrance hall.

The Only Milk A Human Shall Drink Comes From Their Own Moms!"

Corporations such as those mentioned above kill animals and nature, because of that they are the targets of our attacks.