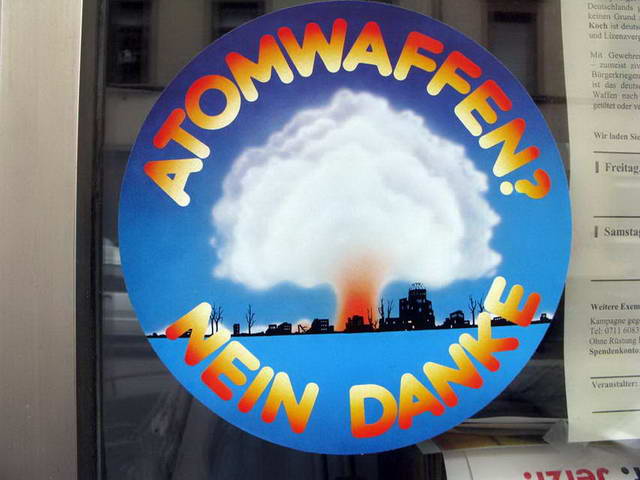 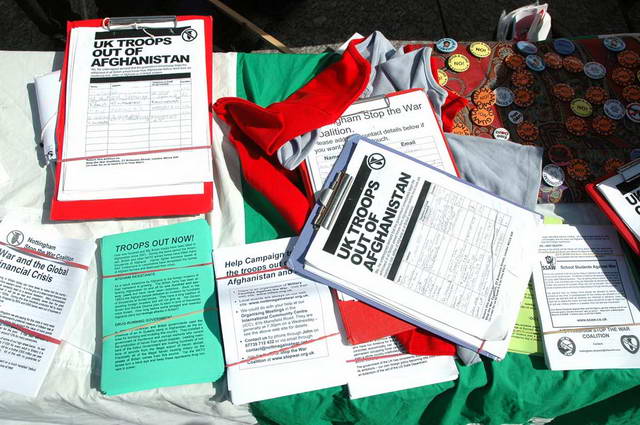 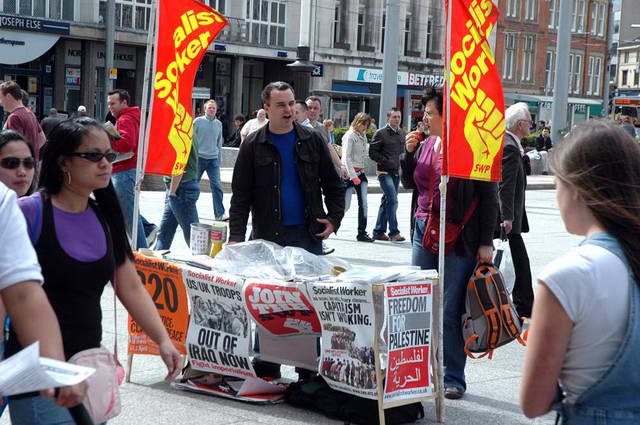 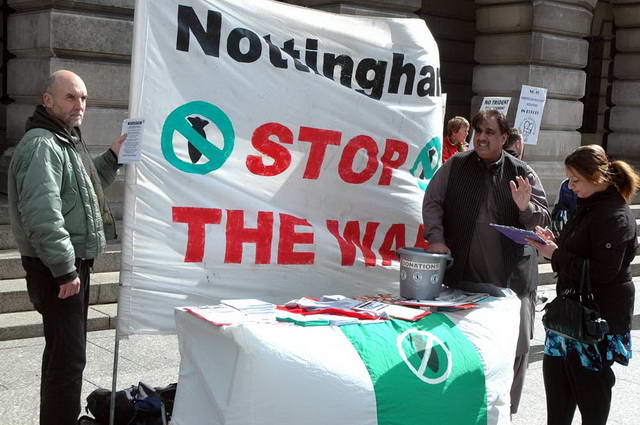 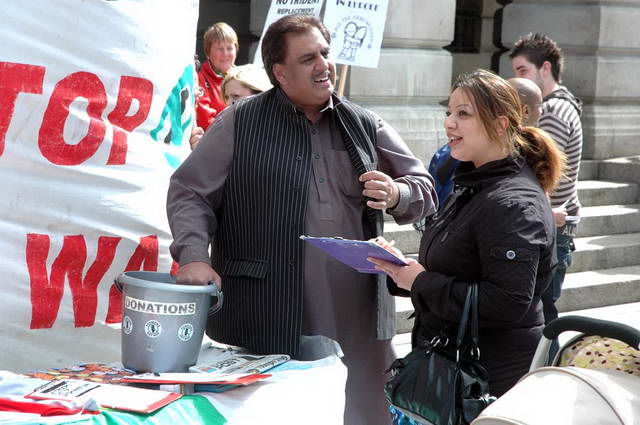 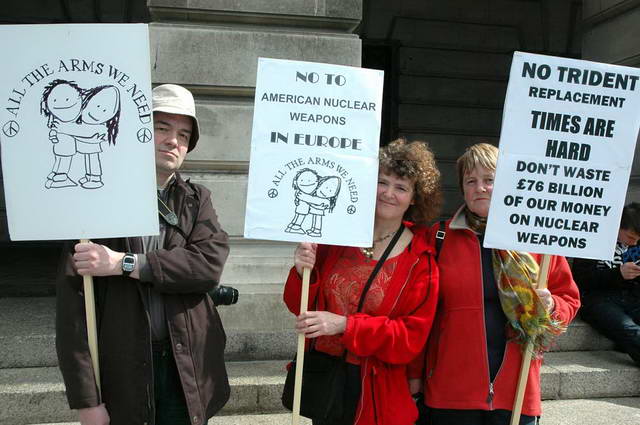 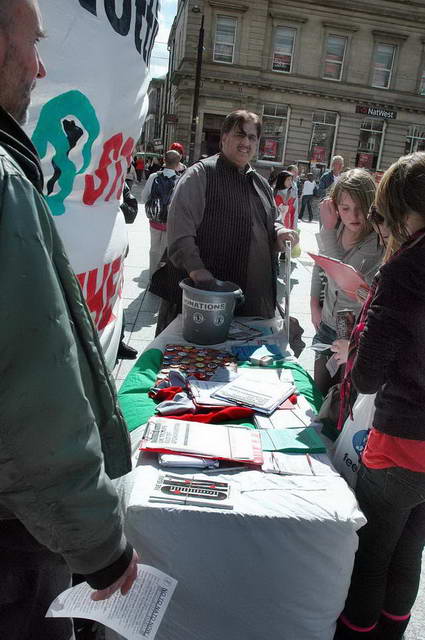 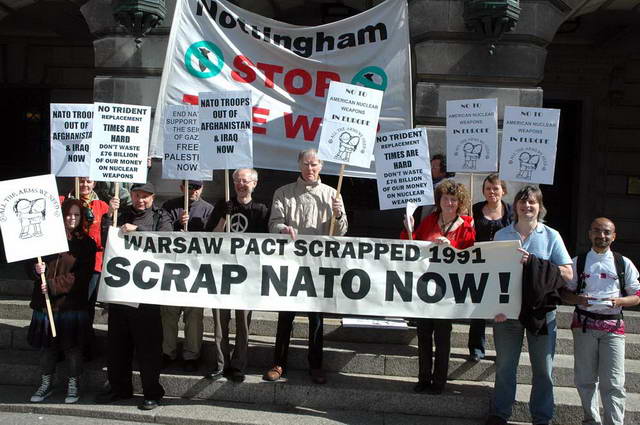 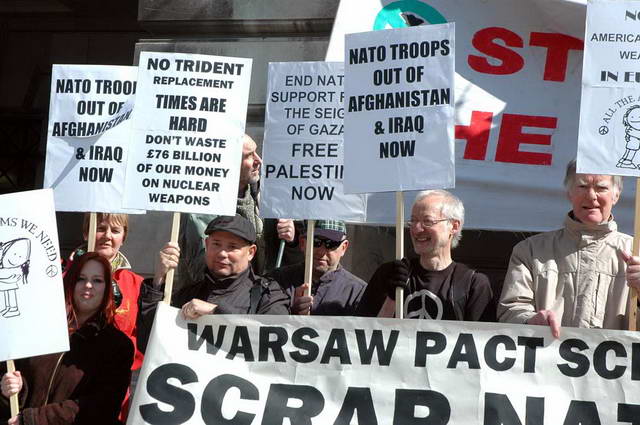 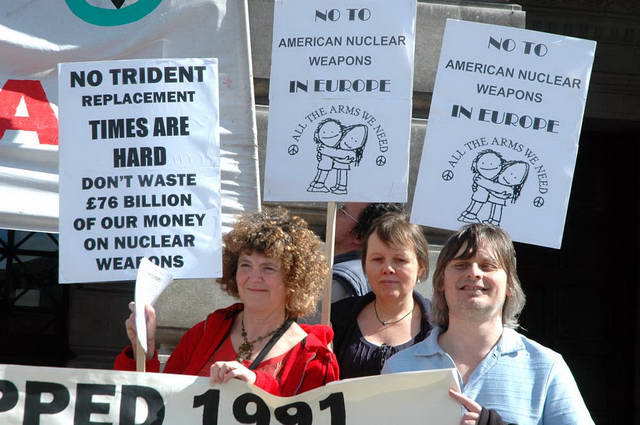 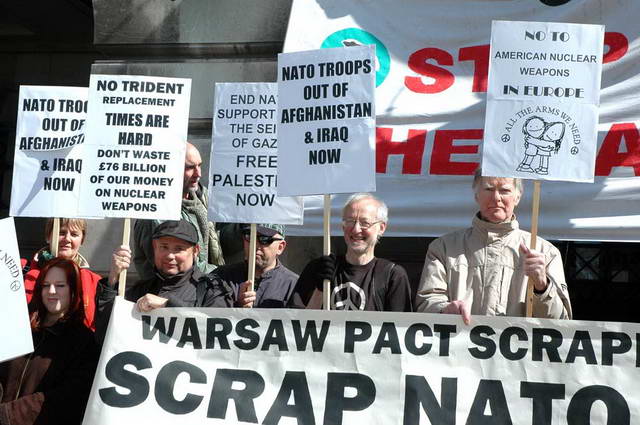 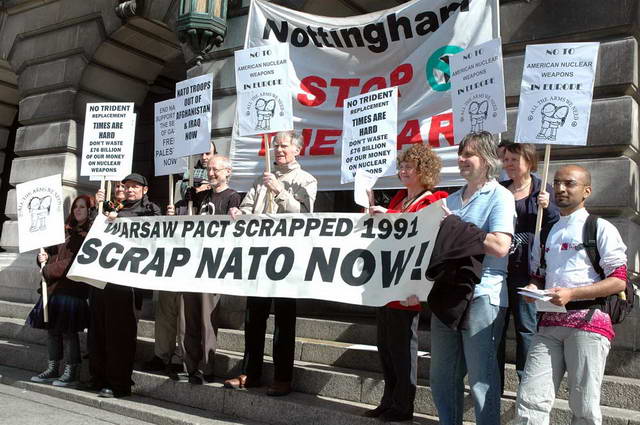 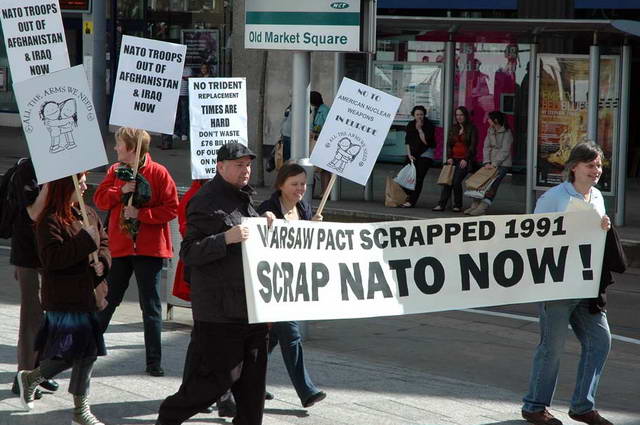 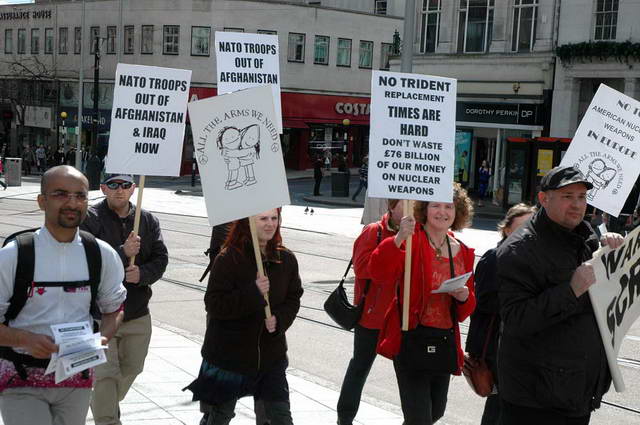 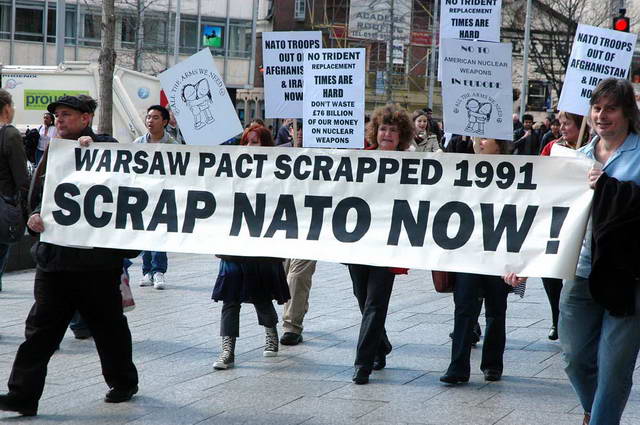 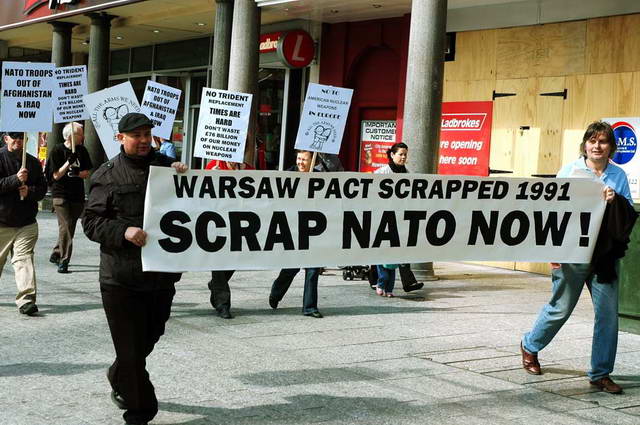 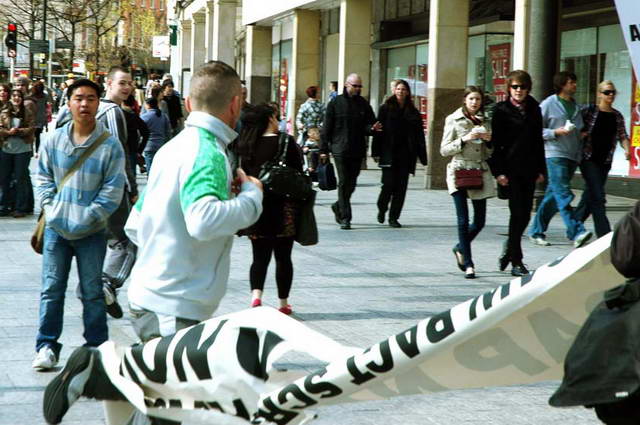 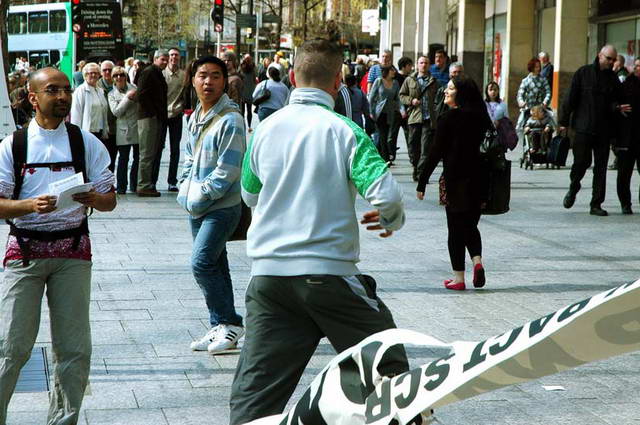 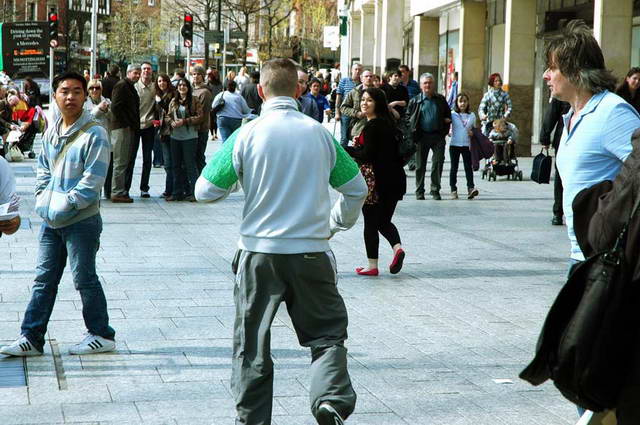 Before dispersing, they went around the square for a short parade, trying to get their message out and to hand out leaflets to passers-by. Shortly before they'd finished however, some passing goon thought he would push past some of those in the demostration, knocking them aside and ploughed straight through the main banner, ripping it apart. Clearly a man of few words, failing to agree with their message.

Saturday April 4th is the 60th anniversary of NATO, the world’s most powerful military alliance. NATO’s 60th anniversary summit in Strasbourg will be attended by mass demonstration and resistance, and there will be local protests throughout NATO member countries. So what’s wrong with NATO?

NATO is militarising the world. NATO promotes the idea that militarism guarantees peace, and its members currently account for 70% of the world’s military spending. From its origins as an ostensibly defensive alliance, NATO has developed a strategy of military intervention in order to expand its sphere of influence, as tested in 1999’s unjustified and tragic high-altitude bombing campaign against Serbia.

NATO threatens nuclear war. As part of NATO’s arsenal, hundreds of US nuclear weapons are sited across Europe, in violation of the Non-Proliferation Treaty. NATO rejects a “no first use” policy, meaning that it reserves the option of a pre-emptive nuclear strike. Britain’s Trident nuclear weapons are assigned to NATO, and could be used against any country perceived to be threatening a NATO member.

NATO sponsored terrorism. From the 1950s to the 1980s NATO operated a network of clandestine army forces across Western Europe, codenamed Operation Gladio. These secret NATO paramilitaries carried out terrorist attacks for which they framed communist groups in order to frighten populations into voting for right-wing governments.

NATO is a tool of the “War on Terror”. The September 11 attacks were the excuse NATO’s masters were waiting for. Under the banner of the Global War on Terrorism, NATO immediately militarised the Mediterranean and went to war in Afghanistan. Tens of thousands of Afghan civilians have been killed already and NATO forces are killing more every week in this bloody and unwinnable war.

NATO is provoking a new Cold War. NATO was established to oppose the expansion of the Communist Bloc. Its inclusion of West Germany provoked the creation of its communist counterpart the Warsaw Pact, and thus the Cold War was formalised. However, far from dissolving after the Cold War ended, NATO expanded to the East, adding many former Warsaw Pact countries. Now NATO’s plans to place missile defence systems near Russia’s border have provoked Russia to aim its own missiles back at Europe.
NATO is an obstacle to global nuclear disarmament and world peace. Its further expansion must be halted and all US/NATO nuclear weapons removed from Europe. NATO should be dismantled and its resources used to achieve a nuclear-free, less militarised and therefore more secure world. 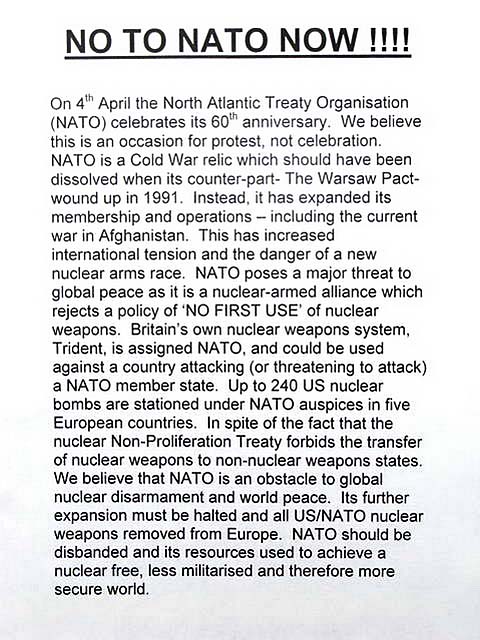 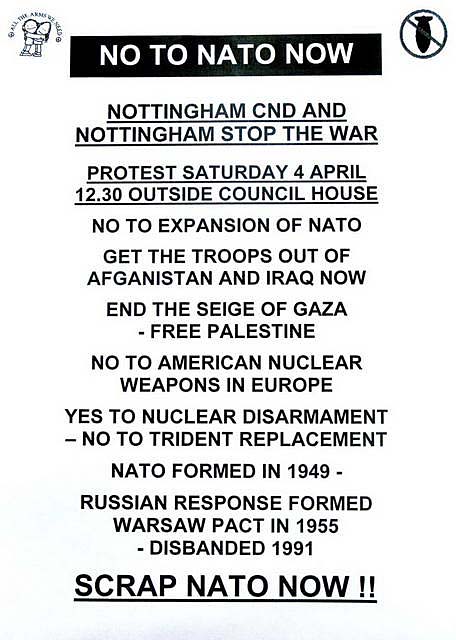