A Mayday protest of the metropolitan police 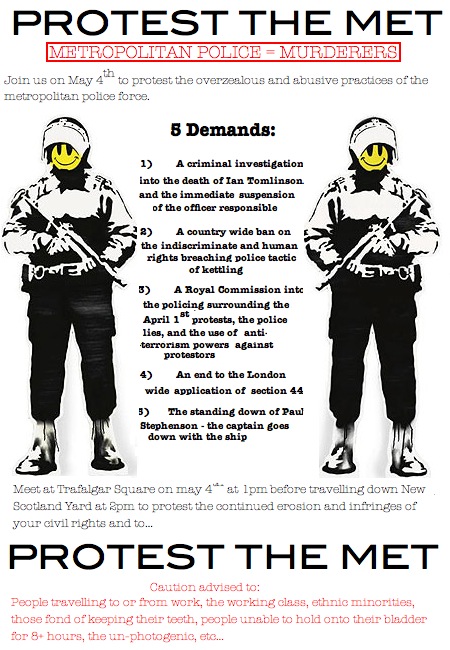 Our civil liberties and human rights are infringed upon daily, by the politicians in charge they are seen as little more than obstacles to overcome. The police have proven that they cannot stop abusing the anti-terrorism powers they have been given yet they want more, and within the metropolitan police is a culture that has...
* led to deaths in the past
* made where people go into police vans without a scratch on them and come out covered in bruises the norm
* created abuses of terrorist powers where people are kept for several days without charge and released in other parts of the country with no money and no phone
* made it so that they will lie to the media, to the government, and to the public to cover up their crimes

That is why on Mayday at 2pm we will be moving our protest from Trafalgar to outside the offices of New Scotland Yard at, we have 5 demands:

1 - A criminal investigation into the death of Ian Tomlinson and the immediate suspension of the officer responsible for his death
2 - An immediate ban of kettling by every police chief across the country and for government to subsequently make it illegal
3 - A Royal Commission into the policing of the recent protests and the abuse of anti-terrorism powers used prior to and during the protests
4 - An immediate end to the London wide application of section 44. The city houses 8 million and has millions more working and visiting every day, why are we all suspects?
5 - For Paul Stephenson to stand down from his position of head of the metropolitan police, he is new to the position but the buck lies with him for perpetuating the current injustices and culture within the met. The protests, the policing, the lies, the cover up, etc... all occurred under his watch and he must take ultimate responsibility.