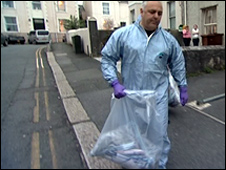 Ooh! look out for that toxic "political literature"

Really? This, as many of us had predicted was the inevitable result of arrests made purely to justify the repressive Police operation in London during the G20.

"Police say the final member of the five, a 25-year-old man, was freed on Tuesday night. The man was arrested in Plymouth on 27 March, along with two 20-year-old women, a 19-year-old man and a 16-year-old boy after police found explosives. Police said investigations were continuing, but those freed were no danger to the public..."

"'Firework-like devices' A search of a Plymouth flat after the arrest of the eldest man led to police finding "political literature". After the flat was searched, a number of "firework-like devices" were made safe by Royal Navy bomb disposal experts. Literature found in the flat was described by officers as political but "not extremist". The 25-year-old man, the 20-year-old women and the 16-year-old boy are on police bail in connection with other offences. The 19-year-old man faces no further action."

So they found some Climate Camp leaflets and a couple of Brock's Bangers...and this is enough to keep 5 people in Custody without Charge for up to a week?

"Det Supt John Clements, of Devon and Cornwall Police, said: "The Constabulary is continuing to carry out a thorough and detailed police investigation and, while a large number of items have already been seized and arrests made, the investigation is ongoing. "We would like to reassure the public that at no stage has anyone been released from police custody who poses any threat to the public.""