Tamil Protest in Parliament Square: Students on Hunger Strike to the Death

Day 4 of peace protest in Parliament Square: 2 students on hunger strike (no food, no drink) since Tuesday now too weak to stand...on hunger strike to the death... until there is a ceasefire 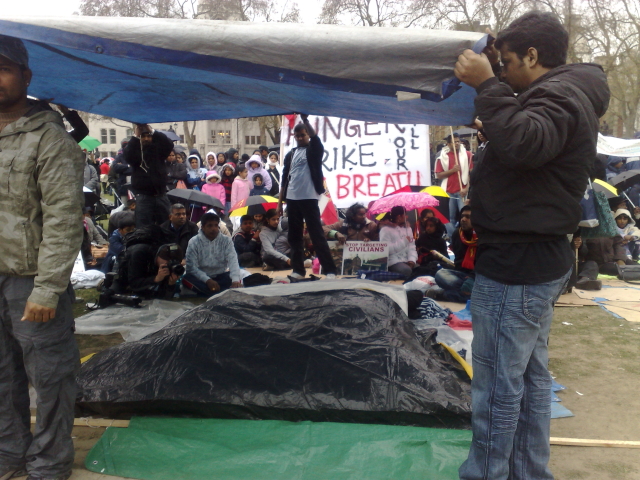 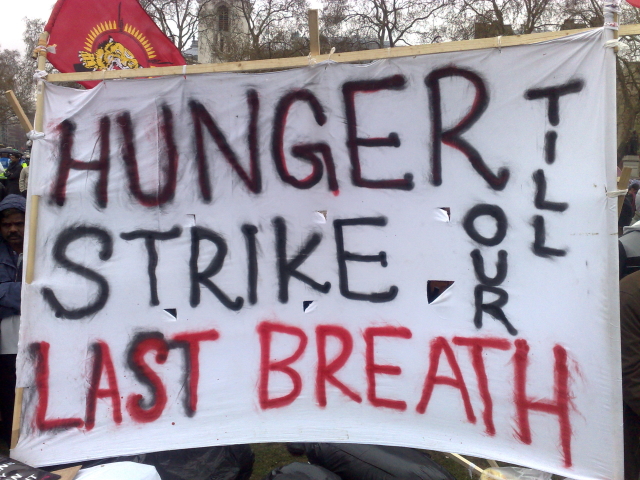 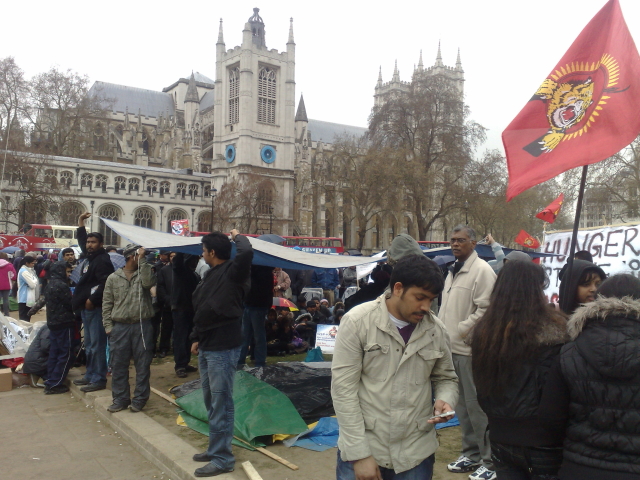 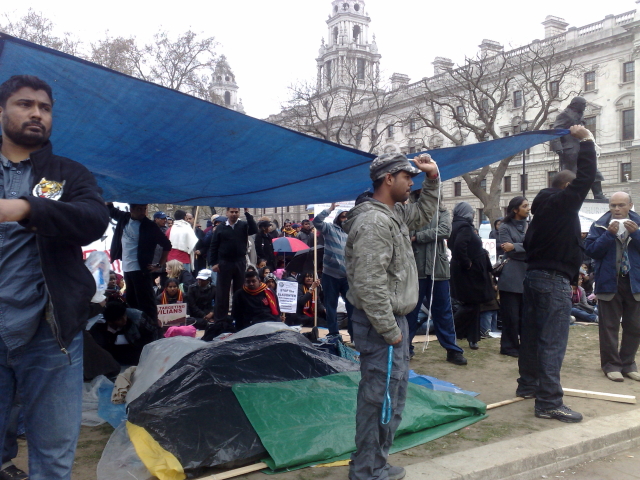 Two Sri Lankan students, currently studying in London, one aged 21 and the other 28, have been on a full hungerstrike since Tuesday, accepting no food or water until a ceasefire is declared. Their condition has understandly started to deteriorate considerably and they are both very weak. Doctors taking part in the protest and ambulance crews are at hand and on stand by in case either of these men loses consciousness. They are currently not able to stand anymore.

Although the protest has entered its fourth day, the police are refusing to allow the protesters to erect any tents to accommodate protesters overnight or as shelter against the rain for fear that the area will become a tent city. This includes not allowing a tent to be put up to allow for medical care needed for any protesters and particularly the hungerstrikers. However, a canopy has been set up as it is raining. Negotiations are currently underway with the police to allow a tent to be set up for medical aid.

There is currently (lunchtime, 9 April) around 3000 protesters in Parliament Square. They have stated that they will not leave until a ceasefire is declared and urge that more pressure be applied on the Sri Lankan government by the British government and the international community. Prayers were held last night in Parliament Square by different Sri Lankan faith community leaders.

Numbers have fluctuated between 300 to several thousand protesters throughout. The Tamil protesters do not intend to break the law and hope to keep their protest peaceful.
Maria Gallastegui from the ongoing Parliament Square campaign, supporting the action, said, “the international media needs to highlight what’s going on in Sri Lanka and what’s going on in Parliament Square. Two students here are on complete hunger strike. That’s how serious the situation is. They need support and solidarity.”

Most of the support thus far has come from the Tamil community in the UK and the protesters and Peace Strike are calling for more humanitarian support from the wider community. There is a civil war ongoing in Sri Lanka and the civilian casualties have been mounting all year. Furthermore, many people are in towns that have been cut off by government forces and there is scant respect for many civilians caught up in the conflict. This is an anti-war protest. All anti-war and human rights activists and groups are welcome.

The protest started at lunchtime on Monday organised by Tamil community groups and many Tamil students on their holidays. The protesters demands are simple and clear: we want a ceasefire and we want it now. Their means are wholly peaceful, even if their protest is deemed illegal under current UK laws . On Monday night and into Tuesday morning, the protesters, including men, women and children, occupied Westminster Bridge bringing traffic to a standstill. Since then, the protest has largely been confined to the green in Parliament Square and is ongoing…

Time to stop the war…
A larger action is planned for Saturday 11 April, organised by the British Tamil Forum, is set for 1pm, starting at Embankment Tube to end at Hyde Park. The organisers emphasise that anyone joining the march and demonstration must be peaceful.