On Saturday April 11th Cardiff ABC will be hosting a gig to benefit the EDO/ITT decommissioners and Greek prisoners involved in the riots in December. 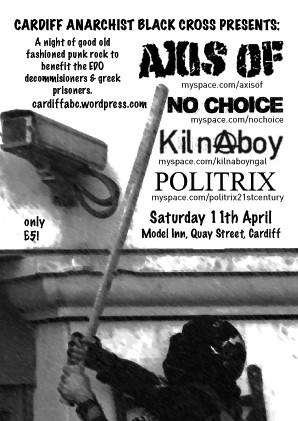 With information stalls and practical information about how to support the prisoners and campaigns.

Bands include
*AXIS OF (

EDO DECOMMISSONERS
On 17th January 6 people entered EDO MBM/ITT and caused over a quarter of a million pounds worth of damage. The intent was to decommission the factory to prevent the manufacture of weapons that could be used against the people of Gaza. Two of the decommissioners have been remanded into custody. “Windows had been smashed and offices turned over in what I would describe as wanton vandalism, but with machinery and equipment so targeted that it could have been done with a view to bringing business to a standstill. The damage is significant and the value substantial.” DCI Graham Pratt. A support campaign has been set up and money raised to help with their case and to support the two prisoners.

GREEK UPRISING
on the 6th of december 2008 police shot dead a sixteen year old boy in athens. this sparked two weeks of intense rioting in all major greek cities. it quickly became evident that this was more than mindless vandalism, this was insurrection. more than 270 people have been arrested in connection with the actions. 67 of them have been detained, while 50 immigrants that were arrested were rapidly condemned to 18 months of imprisonment and are being deported. 19 arrestees in larissa face charges under the anti-terrorist law. countless people were brought to the police departments but were released with no charges in the end.

OUR PASSION FOR FREEDOM IS STRONGER THAN YOUR PRISONS