Law under section 76 - Photography, a crime?

The police passed a new law that says that any person taking photographs of a police officer may be considered illegal and can face fines or imprisonment up to 10 years. 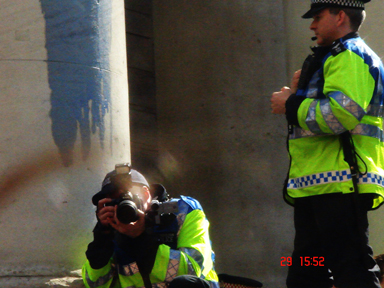 Smile, you're on camera.

As of Monday 16th of April, 2009, a Law under section 76 of the Counter-Terrorism Act is active, posing serious questions about the police's actions and the citizens' interaction with them.

The law states that if anyone takes a picture of a policeman/woman/officer in duty it will be considered illegal if they prove connections to terrorism.

http://www.guardian.co.uk/uk/2009/apr/07/video-g20-police-assault) the past couple of weeks, this Law could have tremendous impacts on the way the Met Police handle protests (

With Ian Tomlinson's case, the truth would have never emerged if it wasn't for professional and amateur video and photographic evidence which surfaced in response to the police's claim that "Ian Tomlinson's death was due to a heart failure".

This Law only enforces the brutality with which the police (and in a larger scale, the government) deals with people disagreeing with what they do. These people are supposed to "serve and protect" us, not rule us.

However, in the past few years, under the blanket of "Terrorism", governments around the world (especially in the US and the UK) have removed rights from their citizens to monitor so-called "terrorist activities". This way, every two steps you see a "Area monitored by CCTV" in London, and the police can take videos or photos of you at any point, without you knowing or being able to say anything. But wait.. if we try to do the same we.. get arrested. Because we are considered the terrorists.

While we are not terrorists, they are afraid of us and the power of everyday people in large masses (as opposed to powerful people in small groups). They want others to think we are the terrorists so they can suppress us and the uneducated, bland public will think they have the right to do so. But we know who the real terrorist is, and we cannot let them deceive the world into thinking they have the right to pass this Law without any obstacles.

If you are a UK resident, please sign this petition and send it to as many people as you can. Just think what will happen to you if you see your friend being kicked by a policeman and you capture that on video in the next protest.

We therefore do not share the concerns expressed in the media that the new offence criminalises taking photographs of the police. However, we do regard as significant the fact that this is being widely reported as a matter of concern to journalists. Legal uncertainty about the reach of criminal offences can have a chilling effect on the activities of journalists and protestors. We therefore recommend that, to eliminate any scope for doubt about the scope of the new offence in section 76 of the Counter Terrorism Act 2008, guidance be issued to the police about the scope of the offence in light of the decision of the Court of Appeal, and specifically addressing concerns about its improper use to prevent photographing or filming police.]]

Can anyone point me in the direction of the exact wording of Section 76 (verbatim) so I can carry a copy of it with me for future reference if the need should arise?
Also it could be good idea for copys to be handed out at future demos for protestors to know their full rights.

Of course it is not unlawful to take pictures of policemen. But the scope of this law makes it very easy for the police to misuse it, claiming the intention to obtain information 'of a type' that may be useful to terrorists.

That is the problem, and the fear, relating to s76. FITwatch are aware of many instances when people have been told that they cannot take pictures of police officers, or have been ordered to delete images.

Which is why we asked people to take and publish pictures of police officers as widely as possible - something which has happened a great deal over the course of the G20, and I'm sure will continue to happen.

The media and public attention that has been focused on this peice of legislation has surely made it more difficult for the police to widely misuse it, as I am sure they would have done otherwise, and possibly still will when the fuss dies down a bit.

FITwatch is continuing to take and publish pictures of public order coppers, and also where possible to publish names to go with the pics. This is because they are servants of the public - us - and it seems unfair that they should know our names, while we dont know theirs...

So far we have not had any major problems specifically with s76. They still seem to prefer to nick people for some imaginary obstruction or assault.

what court of appeal decision?

could we have a link or reference name for this case?
Ta

The case referred to is presumably the "Bradford case".

A judge has basically added an "intent" requirement into the Terrorism Act which the state had previously not put there, as regards possession of material "of use to terrorists". Activists had previously pointed out that the section of the Terrorism Act would make possession of mundane objects illegal because they could potentially be "of use to terrorists" (e.g. street maps, spanners, bleach). Before the Bradford decision, the state had been regularly using the offence in question to charge people on tenuous evidence, for possessing material such as jihadi propaganda, dodgy equipment guides, and even things like street maps and Empire State Building photos. It was used repeatedly during the RAF Fairford protests to arrest peaceful protesters, e.g.

The thing is, that the restriction on the use of the Terrorism Act was imposed by the judiciary, it was specifically NOT written into the legislation by the government or parliament, and it could easily be altered or worked around in new laws. (I don't know the exact reasons for the Bradford ruling, but I suspect it's a human rights primacy ruling which found the law as framed to be in breach of the Human Rights Act / European Convention on Human Rights - which both main parties are talking about making non-enforceable by judges after the next election).

And the police are NOT well-trained as to what the law means and what kind of arrests would hold up in court.

So it is likely that the police will use the new law to claim that people aren't allowed to photograph them (as they already claimed at the G20 protests, BEFORE this law came in), and arrest people who refuse to stop photographing or to hand over/delete photos etc. With this being a "terrorism" law, there is a danger that such arrests will be flagged up in the media as arrests "for terrorism", that the people detained will be held for long periods without charge, and that those arrested for this offence (even if wrongly) will be added to watchlists. The police would then have great difficulty getting convictions, and might face prosecutions for wrongful arrest - but by that time the damage would be done.

It'll never be misused though

Will it? Nah the police have a long history of never misusing the powers that they've been granted or of applying laws specifically introduced for one thing to something completely different; never in a million years.

Besides provided they've got a "reasonable excuse for their action" everyone will be hunky-dory and as we all know everyone should have a reason for taking a photograph these days besides "Because I wanted to".