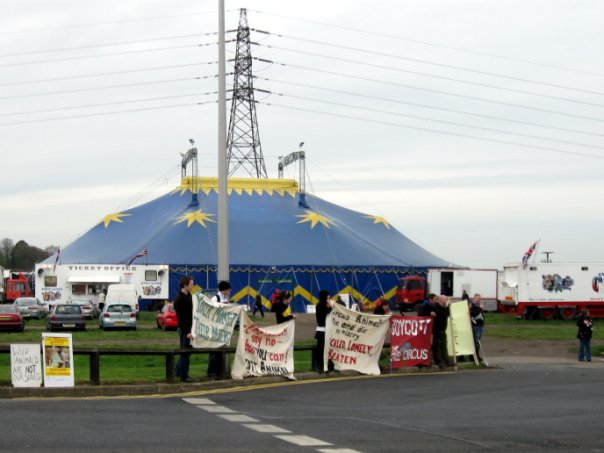 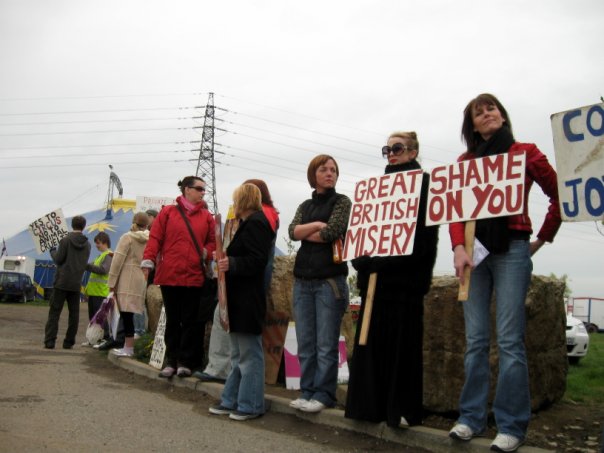 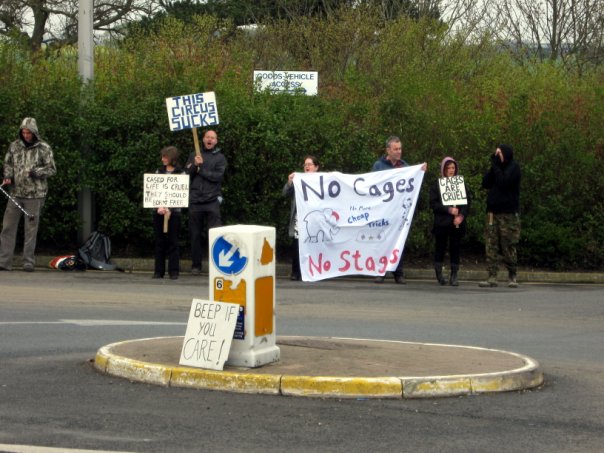 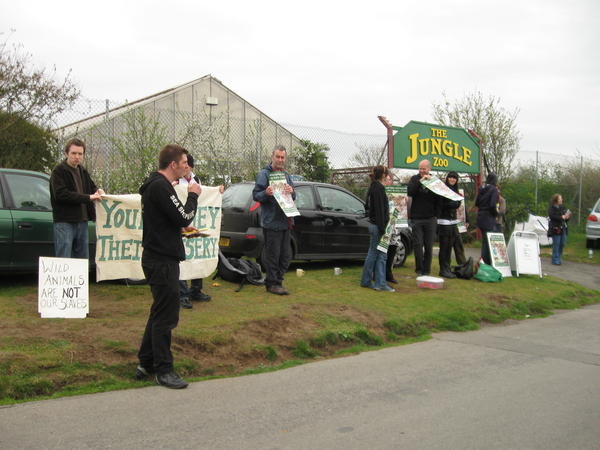 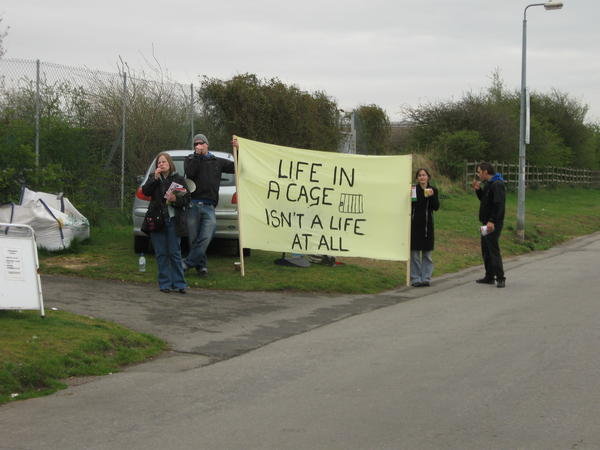 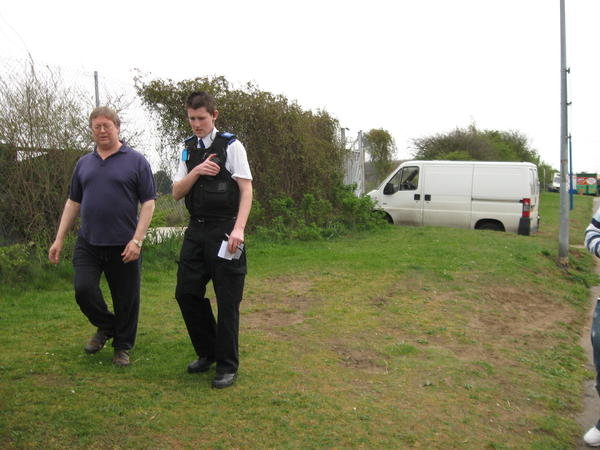 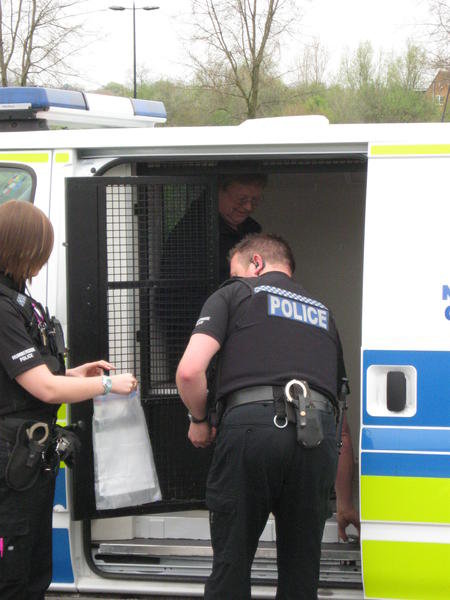 Two abusers of captive wild animals were hit by protest on the Lincolnshire coast yesterday. In action timed to coincide with Zoo Awareness Weekend, the Jungle Zoo in Cleethorpes found itself with a campaigning presence outside the gates on the morning of a busy Easter Sunday. Activists from around the North of England gathered to display banners, make plenty of noise, hand out leaflets and talk to visitors and passers-by about the well-documented welfare problems inside the animal prison.

In the early afternoon, at least forty campaigners gathered outside the 'Great' British Circus, which is in the middle of two weeks of performances in Grimsby before moving on to Leicester. The circus, which has been followed by protests throughout its current tour of Nottinghamshire and Lincolnshire, has one of the biggest wild animal acts in the country and this year introduced three elephants to its cast of captive tigers, lions, zebras, camels, llamas, horses, ponies, goats and reindeer. This year is the first in ten years to see elephants in a UK circus, thanks to Martin Lacey and his gang. The miserable lives of circus animals and the shameful record of the Great British Circus were detailed in a recent Indymedia report on a protest in nearby Scunthorpe:

The Great British Circus remains next to Morrisons on Laceby Road, Grimsby, DN37 7SQ until Sunday 19 April. From Tuesday 21 April to Sunday 10 May it will be on Leicester Road (A426), Glen Parva, Leicester, LE2 9TG. The circus's website gives some advance notice of its venues. Protests have been well-attended so far, so get organising if it's coming near you!

What distinguished this day of protest from the average demo came later when Bernard Bale, manager of the Jungle Zoo, was carted off by police following an 'incident' involving a Transit van, which we can't say too much about at the moment because it's now the subject of a criminal investigation. A banner was broken, a bystander's parked car damaged, and one protester suffered slight facial injuries. The whole thing was caught on camera and the video offered to Humberside Police as evidence. We hope it, and further details, can be made public in due course. Several police officers including a detective sergeant turned up, and detailed statements were taken from those involved. Bale was the only person arrested. Ten days previously his complaints about reckless motorists outside his zoo were the subject of an article in a local newspaper:

The Jungle Zoo has long been the focus of complaints from animal protection groups and members of the public. The results of a 2007 investigation by the Captive Animals' Protection Society highlighted numerous animal welfare and public safety concerns. Many of the zoo's enclosures are very basic, with birds housed indoors and showing signs of stress such as feather-plucking, snakes kept in tanks too small even to allow them to uncoil, and capuchin monkeys and lemurs kept outside on concrete floors. Barriers keeping visitors and animals apart were also found to be inadequate to counter the risk of bites or contagious disease.

A government zoo inspector, visiting the Jungle Zoo in 2000, recommended that the zoo's licence be renewed "despite a large number of defects" subject to the condition that the owners "produce a detailed and costed plan for the development of the zoo." But returning in 2006, the inspector again referred to the "considerable number of defects" at the zoo. Most damningly, the report stated that "although these were highlighted during the inspection of 2000, the problems have not been followed up by the local council and in the intervening six years these problems have become magnified and solutions are now becoming urgent."

Given its particularly poor treatment of the unfortunate animals it holds captive, the Jungle Zoo should be a priority for those urging a boycott of zoo cruelty. The sooner it goes out of business the better. Peaceful protests outside the gate, educating visitors and passers-by about the problems of imprisoning wild animals to be gawped at by the paying public, and countering the zoo's propaganda about its educational and conservation value can all help.

* The not-so-wonderful world of the Jungle Zoo has been detailed and photographed by CAPS, whose website is also the source of the quotes from the inspector:

* A Facebook group has been set up for discussion of the campaign against the Jungle Zoo, and has more pictures from yesterday's protests:

* Likewise for the Great British Circus:

* Veggies AR Calendar is a good source of circus news and information: