The British Tamils Forum organised another massive march in London on Saturday April 11th to protest at the genocide of Tamils taking place in Sri Lanka as government forces close in on the Tamil Tigers. By the time I left around 4.15pm it stretched most of the way from Westminster to Hyde Park.
Pictures Copyright (C) 2009, Peter Marshall, All rights reserved. 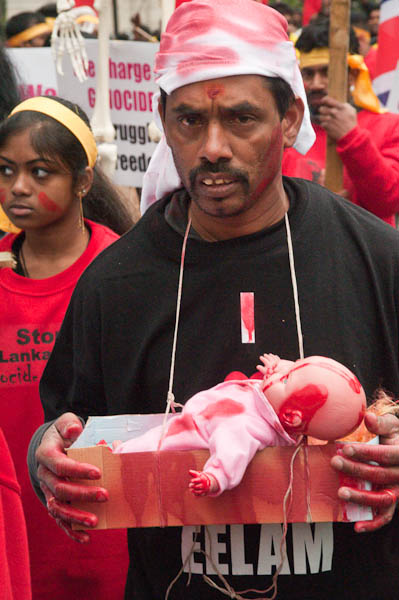 Civilians including babies are killed 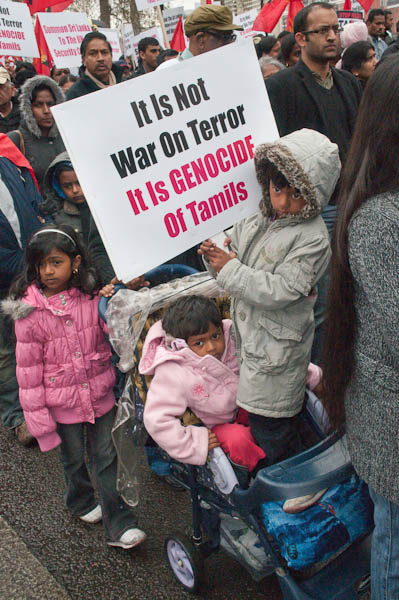 Not War on Terror, Genocide of Tamils 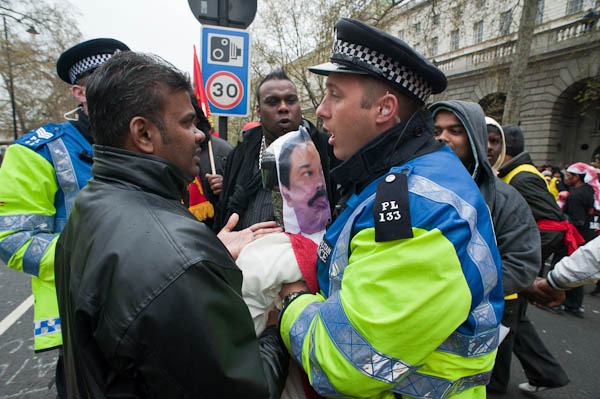 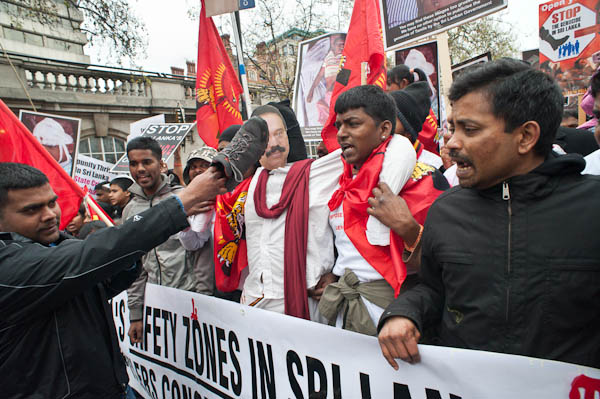 Another presidental dummy gets shoe'd 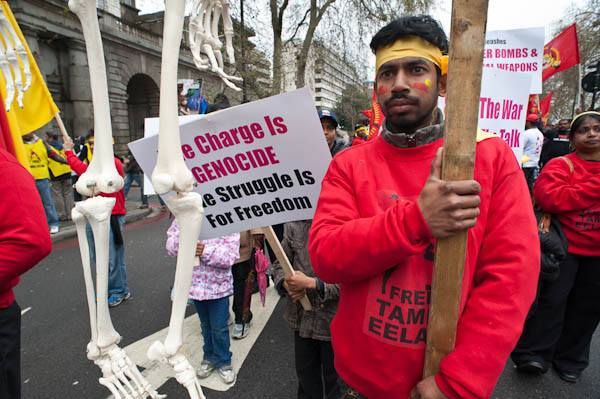 The charge is genocide 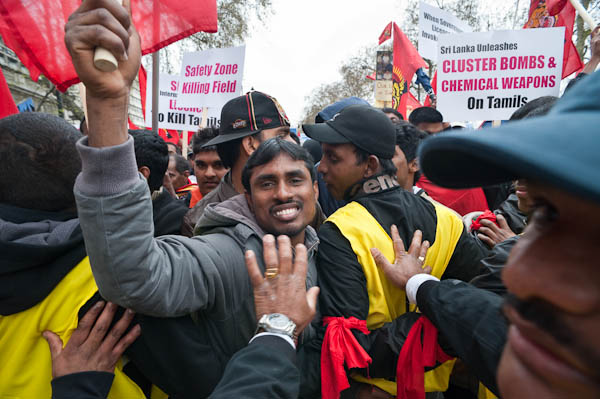 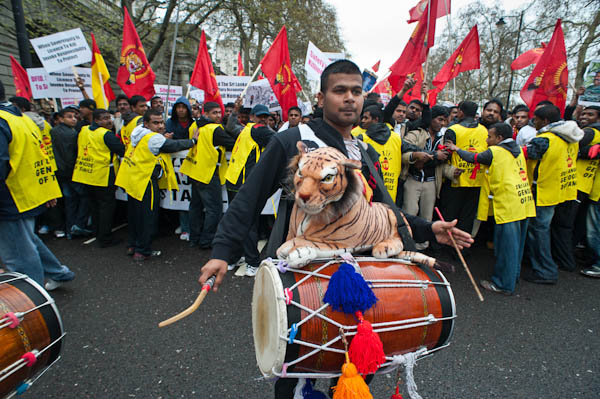 A tiger on the march 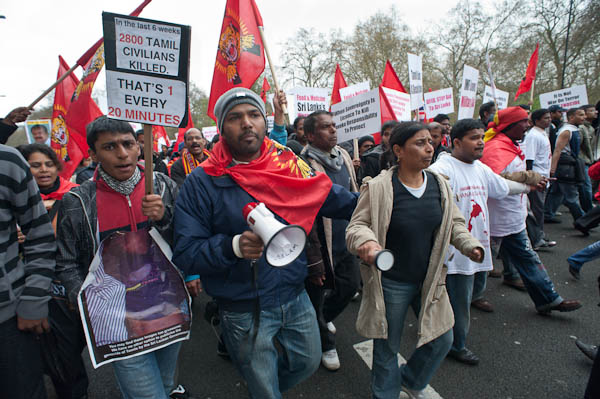 One killed every 20 minutes 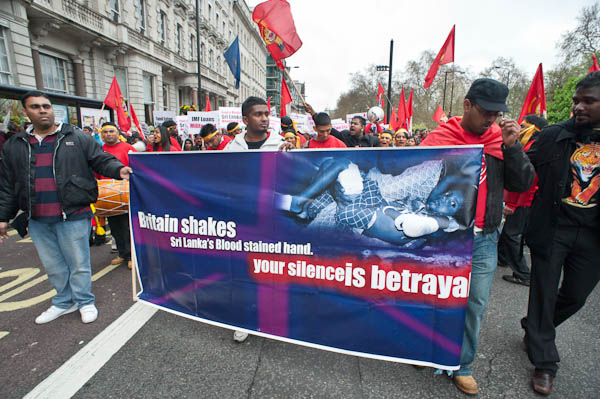 When even the police give an estimate of numbers as 100,000 you can be sure it is a very big march, and as the crowds were generally pretty solidly packed there seems little reason to question the independent estimates of around 150-200,000 people.

The vast majority of them were Tamils, with probably only a few hundred white faces. There didn’t seem to be a great deal of media interest, with few if any photographers from major newspapers or news agencies or cameras from major UK TV stations, at least at the start of the march at Temple.

However it was reported by some, including the BBC -

http://news.bbc.co.uk/1/hi/uk/7994946.stm - where three very short paragraphs and an indifferent photo accompany a longer piece on the two Tamil hunger strikers in Parliament Square:

http://re-photo.co.uk/?p=627 - a small event where there were almost as many media as marchers, with all the major agencies, papers, channels and most of the freelances I know putting in an appearance.

The Tamil march was also very much a family event - at one time I found myself facing a row of around 20 push chairs, and there were many children carrying placards and being carried on shoulders, as well as crowds of young people and students, with adults of all ages, including some who looked old enough to be my mother or father.

They were united in their opposition to the killing of Tamils in Sri Lanka, but also the vast majority of those marching in some way expressed their support for the LTTE, the Liberation Tigers of Tamil Eelam. A few carried actual tigers, fortunately only large toys, but many wore the colours or carried flags or portraits of the founder and leader of the Tamil Tigers, Velupillai Pirapaharan (sometimes spelt spelt Prabhakaran.)

In the UK, the LTTE has been a proscribed organisation under the Terrorism Act 2000 since 2000. This makes it a terrorist offence for a person to support the group or wear clothing which arouses the “reasonable suspicion that he is a member or supporter of a proscribed organisation.” Police sensibly made no attempt to arrest all 200,000 marchers on Saturday despite their clear breach of the Act.

Although enthusiastic, the Tamils had no intention of causing serious trouble in London and only three arrests were reported. I saw only one small incident, where police prevented marchers from carrying a dummy with a photograph which of Sri Lanka’s President Mahinda Rajapaksa as its face. Once this photograph was removed they allowed them to continue.

Britain has a long history of lack of care for the Tamils in Sri Lanka, going back to colonial days. When we gave Ceylon independence in 1948 we neglected to take any precautions to safeguard their interests. Within a very short time many had been disenfranchised and deported as “Indian Origin” Tamils, whose ancestors had been brought to the country by the British in the middle of the previous century. Since then there has been a continued programme of repression, religious discrimination and marginalisation of Tamils, with Sri Lanka being established as a Buddhist republic in 1972. The LTTE was founded in 1976, and for some years until 2006 large parts of the Tamil areas of the country came under their civil administration.

At least a part of the LTTE success for many years came from the extreme and desperate measures that they have used, including assassinations and suicide bombings. Both sides in the conflict have committed numerous atrocities against civilians. Various international attempts to broker peace over the years came to an end in 2006, since when the Sri Lankan army has been engaged in a full-scale assault on the Tamil areas and the LTTE seem now very close to final defeat as an organised military force, although they are expected to continue as a guerilla group.

At the moment the Sri Lankan government’s policy appears to be aimed at the complete annihilation of the LTTE and much of the Tamil population. Others are being resettled in transit camps and then ‘welfare villages’ which may seem rather more like prison camps than normal life. At the moment it seems unlikely that there will be any effective intervention by outside powers to prevent the genocide of the Sri Lankan Tamils; David Miliband did phone to ask the Sri Lankan government not to return to a full-out assault following their two-day cease-fire,but his plea seems unlikely to be taken seriously. The situation is desperate and although marches like this should call attention to it, the mass media hardly seem to find it newsworthy. We appear to be approaching a truly scandalous climax to years largely of scandalous indifference.

http://tamilidpcrisis.org/urgentAppeal/postcard.php - and there is also a petition form which can be downloaded on the Tamil Writers Guild, for filling in and faxing to your MP or Gordon Brown - at

More pictures from the march on My London Diary at: