ITALY Fly with the Fascist to London 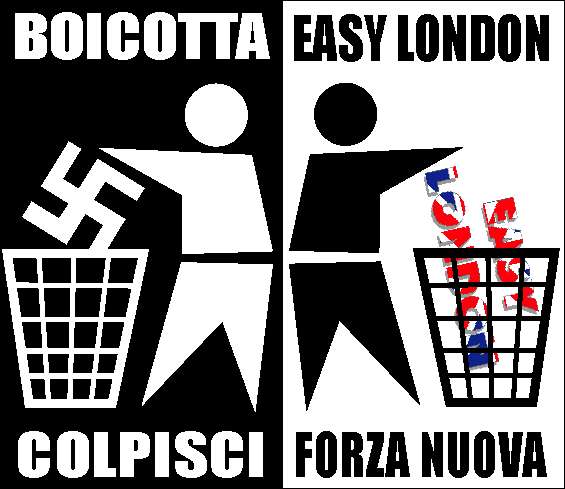 Tango heart ... beauty is in action, Tango heart torn ... .. So this gray" Zetazeroalfa singing, the group leader Gianluca Iannone and factotum of the extreme right of Casa Pound: occupies the building of Via Napoleone III, but you can also meet at library Via San Martino ai Monti iron head or behind the counter of the Cutty Sark pub in Colle Oppio. O still in the tattoo shop that is called, in fact, Tango Heart Tattoo, behind the Termini station in Calatafimi 22. To manage the local Alessio Bernardini, a candidate in 2008 with the Right of Storace in IX municipio. And it is at the same address (via Calatafimi 22) that matches a "cultural association" (Quadrophenia) than in recent weeks has paved Rome event with 'pop' that call to travel to England. "Te la do io London", reads the poster, and promises "work accommodation and / or English course 'at any time of year." All this reflects very closely the best known "Easy London" which, nell'89 born at the instigation of former fugitive from the Armed Revolutionary Nuclei (NAR) Roberto Fiore and Massimo Morsello (returned home in'97 and founder of Forza Nuova), organized and still organizes travel, work, housing and language courses in England in connection with the company "Meeting Point" in London. The 'Meeting Point' who have worked over the years also Andrea Insabato (the attacker to the location of the Manifesto leftist newspaper in 2000) and Mario Corsi, the radio of "Marione", formerly terrorist of Nar, which for some years leading transmission "Te la do io Tokio '. Forza Nuova and Casa Pound, officially, the two organizations are very strong right on Rome territory. But they are also "in conflict" between them. Different mentalities and the political horizon. Forza Nuova, led by Fiore, is traditionalist Catholic, rigidly anti-immigration, and do political battle against populist rapes and pedophilia. Casa Pound, whose ideological leader is Gabriele Adinolfi, is careful to give a new aspect: discussions (the last one on Craxi) and presentations of books, futurism and initiatives "spectacular", like the one two years ago close to the 'bubble' of Big Brother. Fiore and Adinolfi are old friends: 30yrs ago both were leaders of the Third Position. "
When in 1980 came the arrest warrants for "creation of armed band" all fled, and two, at different times, in London in the 80s, and both returned to Italy in the years ahead, eager to collect what was left of the phenomenon 'naziskin '. Today London is still put together two sides to the right-wing. Who knows if it is competition or merge in the name of the business

From the left: 'Boycott'

The website was built with that "smart" style which has always characterized the idea of graphic "Far Right Roman is certainly more attractive than the' cousins' Easy London, more" serious ". The writing that stands above the homepage and that the offer addressed only to the "EU citizens" perhaps best explains horizon. From the 90s to now have been left by alternate voices for boycott of 'Easy London, daughter of absconding extremists blacks. Yet, it seems, the agency continues to enjoy a good health with its nine offices in Italy (two in Rome) and the new route just opened to Dublin and the green Ireland.

I will post up a complete list of hostels and work agencies connected to the Italian far-right. All these addresses are in London and includes the work agency London Job based in Holborn and connected with a well know fascist who is with CasaPound Movement.

We'll be grateful. I thought that You intend to detail some of historical and political context. If you have addresses and informations on the subject we will be overjoyed.
ciao!

Addresses of the Fascist Businesses in London

Director Davide Olla, former member of the fascist terrorist group NAR
(see screenshot below of a whois lookup on who owns the domain. You guessed it
Gabriele Adinolfi - connected to CasaPound Movement, see wikipedia:

There are also other former NAR members who have businesses in London from bars to import/export businesses. Will post more soon.

Dear comrade, I thank you on behalf of all italians fellow, also on behalf of those who have never really understood who is behind these organizations apparently regular and legal in all respects. But see the name of Gabriele Adinolfi puts fear. You are therefore invited to add more information when you. And thanks again for Your cooperation.