SOCPA, the tamils, and the grass

in a move reminiscent of the farcical GLA fences prior to nelson mandela's visit, and at the time of the burmese protests in summer 2007, the tamil protest in parliament square is being marginalised by the GLA and police while thousands die in sri lanka 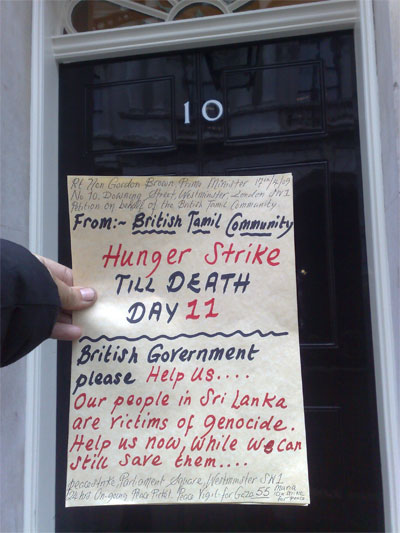 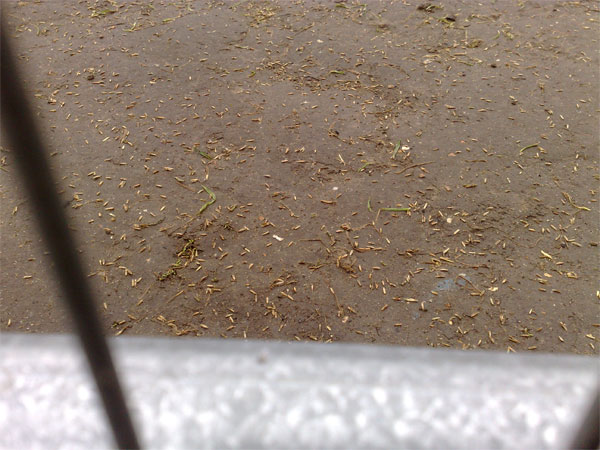 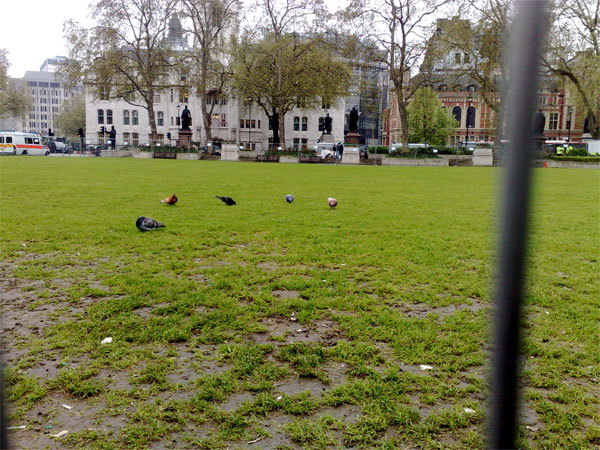 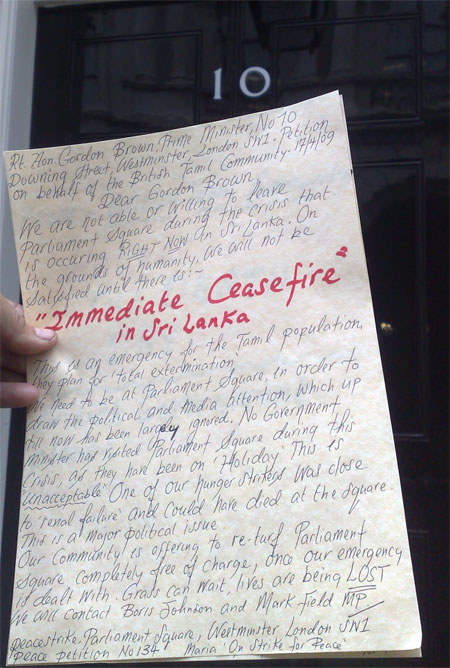 back in the summer of 2007, during the war of attrition between authorities and the parliament square peace campaign, the GLA suddenly arrived with huge fences to enclose the grass area of parliament square. they claimed it was in order to re-seed the grass and do other works.

at the time i made repeated requests for documentary evidence from the GLA about the contract for this work, and they failed to provide it.

when the crisis and security clampdown in burma blew up, there were mass protests by burmese people outside parliament. the police used SOCPA and the lack of space (due to the fencing) to impose conditions to curtail these protests and minimise the media impact.

now, the 'final solution' is rolled out by the government in sri lanka, and western interests are happy to turn a blind eye to the genocide. many thousands of tamils living in the uk have shown that they can peacefully mount mass demonstrations, and they also have a hunger strike to the death in parliament square.

suddenly, last week, the GLA arrived with their big fences. they claim they are re-seeding again. at least this time they are doing so at the right time of year (unlike the farce in 2007). a spokesperson claims that due to this spring's weather conditions there is "a small window of opportunity for the grass to be seeded and regrown".

but rather than properly seeding the area, the GLA have simply installed a small machine that has scattered some seed across the grass, and as can be seen in the pics, this is providing plenty of food for the pigeons, but is unlikely to provide much new growth after the feasting.

in the meantime, police have used SOCPA to impose conditions forcing the tamils into a tiny area and limiting their numbers to a few dozen. this in itself is mysterious, because there is still the matter that the CPS have written in formal court documents that "owing to changes in socpa legislation the unauthorised demonstration offences cannot be proceeded with" (

the tamils are desperate to have their voice heard, and so the tamil community has made an open offer to the GLA that once the protest is over, they will pay to completely re-turf parliament square. in return, they ask that the fences be immediately removed, to allow the hundreds and thousands of people from this desperate community to exert their lawful right to free assembly, protest and expression outside parliament.

activists are now waiting for an official response to this remarkable offer, which would restore the grass to a condition much better than the current pathetic "seeding" attempt, and at no cost to the taxpayer.

the 'peace strike' campaign 'vigil for gaza' has complied with SOCPA legislation despite the question mark over its validity, and the police have imposed a limit of 20,000 on ongoing gaza protests in parliament square. the 'peace strike' campaign has given full backing and solidarity to the tamil protest so there can be no reason other than political for police interference against a large tamil gathering.

in the summer of 2007, it became apparent that political decisions were being made at a high level so that the GLA and the police worked in concert to cramp the burmese protest. it will soon become clear if they are doing so again over sri lanka.

in the latest of a series of daily petitions to downing street, the returfing offer is made explicit. boris johnson and local mp frank field have also been informed. the fences must come down now, and the tamils must be allowed to protest en masse.

attempt to evict brian haw, and comments on seeding - october 2007