Based on their polling for the April 19 elections the Haiti Priorities Project also stated, "The majority who participated in the survey intend to stay home due to the inconsistency exhibited by the administration of President Préval and the international community wanting to practice [electoral] exclusion, a system in which the people have been rejected since the fall of Duvalier 1986." 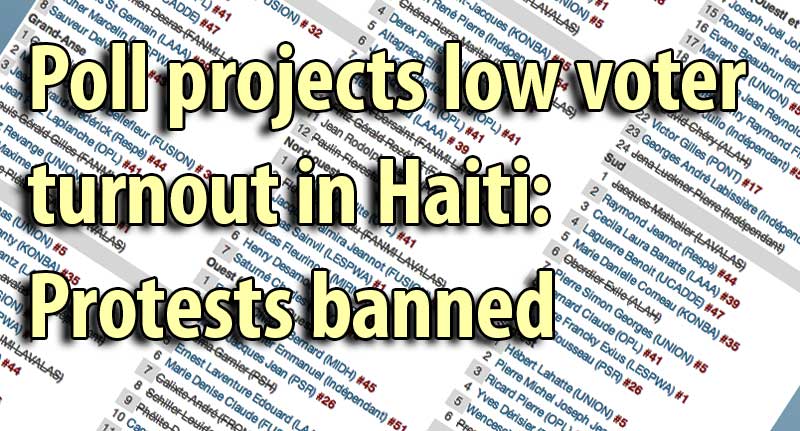 A Washington-based group calling itself the Haiti Priorities Project or HPP recently dispatched a team of 70 pollsters to take the pulse of the Haitian electorate. Based on their interview samples the HPP concluded, "Only 5% of potential voters nationwide say they are ready to go to the polls in order to elect 12 senators for the upcoming elections in April of this year."

A low voter turnout would only add to the already controversial electoral process that began with a ruling by Haiti's Provisional Election Council or CEP to exclude the Fanmi Lavalas party of former president Jean-Bertrand Aristide on procedural grounds. Haitian president Rene Preval met with Secretary of State Hillary Rodham Clinton in Washington on Feb. 5. The CEP's decision to disqualify all of the Fanmi Lavalas party's candidates was announced the following day leading to speculation the move was sanctioned by the Obama administration. Other major stakeholders in Haiti such as the UN, Brazil, Canada and France have openly worried that barring Lavalas from the upcoming ballot will be viewed as undemocratic and call into question the validity of the elections.

Lavalas, which means flash flood, is a political party and social movement in Haiti and has constituted the largest base of Haiti's electorate since it galvanized around Aristide's first successful candidacy for president in 1990. Preval's election victory in 2006, and the success of his Lespwa party, is widely seen as a result of support from the same electoral base.

The decision to move forward with the Senate elections scheduled for April 19 has been overshadowed by visits from former president Bill Clinton and U.N. Secretary-General Ban Ki-Moon in early March and an international donors conference on Haiti held in Washington D.C. yesterday.

Secretary of State Hillary Rodham Clinton also visits Haiti today. She is not expected to comment on the elections directly but her stopover is widely seen as support by the Obama administration for the process.

Demonstrations planned against Hillary Clinton's visit by Lavalas organizers were banned by the Haitian National Police due to the attention similar protests attracted during the Clinton/Ki-Moon visit on March 9. In violation of the police ban a large crowd was seen gathering in front of the parliament earlier this morning. Known as the Palais Legislatif, it has become a rallying site for Fanmi Lavalas to oppose the elections as five of their members continue a three-day long hunger strike in front of the building. They have vowed to continue the hunger strike throughout the weekend to draw attention to the exclusion of their party from the elections.