Passers by join in with protest despite police shenanigans while trying to make up the 'law' as they go along...

We held another demonstration today against Barclays in Birmingham City Centre for their blood-money investments into the filthy Huntingdon Life Sciences.

A riot van was also on the scene, and one of the supporting teens was unlawfully arrested - in an attempt to scare the newly aware bunch away. 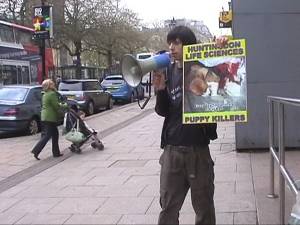 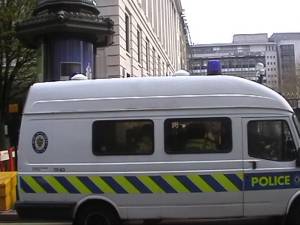 Riot van appears on the scene 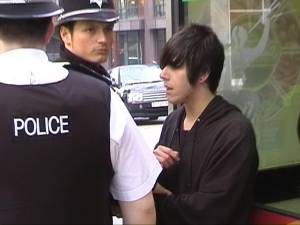 Soon into the demonstration we were greeted by a group of teens, who were curious to know more about the demonstration against the bank, once learning about HLS and just what goes on inside there, and how Barclays support the vile company by investing in them - they were eager to get involved and join the SHAC Campaign to close down HLS. Joining in with our protest the noise was taken up another knotch outside the bank and more members of the public came over to ask about the campaign.

Soon to show up were the police who once again insisted we could not use the megaphone, contrary to our last demo when we were visited by a Duty Inspector who told us we could. After spurring several "ideas" of theirs to why we could not use the megaphone, including "this week is a different week to last week" and "there is a different duty officer working today" - clearly they believe they can make up the law as they go along. Their next idea was to say we couldn't use it due to section 5, more lies.

As we refused to stop using the megaphone, stating we were in our legal rights to use one on the demonstration - they then decided to threaten us with arrest and confiscation of the megaphone. However when questioned in more detail about the section in relation to what they were saying they, literally, went on their bikes.

A riot van was also on the scene, and one of the supporting teens was unlawfully arrested - in an attempt to scare the newly aware bunch away. Thankfully they seemed more angered at the police for this action than scared of them.

See you again very soon Barclays, until you cut your ties with HLS.

I visited the law station this morning to get updates on the arrestee and enquire when I'd get my videotape which was seized returned, but was informed I couldn't have any updates as the arresting officer wasn't on duty today!

The lad was arrested for taking an interest in the demo, he and his friends were standing around expressing disgust at the fact that Barclays are supporting HLS.

At the time of his arrest, the group of teens had moved from the bank across the road to continue watching the demo, in the vid you can see the law crossing the road to harass the teens and make the arrest.

The law claimed he had kicked the door of Barclays which neither I nor any of the non-demoing bystanders witnessed, which is why the law refused to take any details or statements from the witnesses!

It is without doubt a blatant attempt to dissuade people from getting involved in legitimate protests.