Return of the Luddites

In fifteen months at the beginning of the second decade of the 19th century a movement of craft workers and their supporters declared war on the then emerging industrial society. The movement spread across the Northern counties of Yorkshire, Lancashire, Cheshire, Derbyshire and Nottinghamshire. It smashed thousands of machines, looted markets, burned down factories and spread hope of a way out of the bleak future being offered by state and industries. It was a movement that, in the words of the late radical historian E.P. Thompson; "in sheer insurrectionary fury has rarely been more widespread in English History,".

Towards the end of the first decade of the 21st century nearly 200 years later, a new age of Luddites return with an insurrection in México. Over a hundred phone booths of multinational exploiter and bullfight sponser Telmex have been sabotaged using cutters, paint, glue and fire. The Luddites are showing resistance to anthropocentrism (human supremacy), civilization and the domestication of wild nature, using radical methods of sabotage for animal and earth liberation. 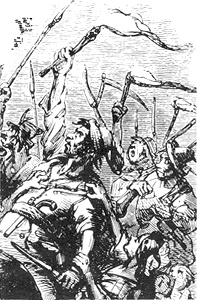 The company that destroys the earth and its inhabitants, Telmex, received a new attack from the Luddites Against the Domestication of Wild Nature (LCDNS); at night we sabotaged 30 telephones, tearing them from their respective booths.

The sabotage against Telmex will not stop until civilization falls.

We are the stone in your shoes!

"Prepared with glue and cutting instruments, we went out on the night of February 9 to sabotage, once again, Telmex phones.

We will continue with these actions until the abolition of domination over the earth!

"We have blocked a major highway in Mexico State with a barricade made by the Luddites Against Domestication of Wild Nature. The fire lit up the dark night of peace and tranquility for those people who carry in large trucks 'raw materials' extracted directly from the earth. The chaos was again before the eyes of the police who arrived on the scene to put out the incendiary fiesta.

We break their precious social order with our wild, insurgent and radical methods of struggle."

"8 more telephones from the Telmex company, destroyer of the land and sponsor of bullfights, were sabotaged with spray paint by the Luddites Against Domestication of Wild Nature.

We will not stop!

"More than 20 Telmex phones were sabotaged with super glue during the night of February 25 in Mexico City (D.F.) and a glass advertisement and a luxury car that we found in our path were stained with rotten fruit.
Radicals for total liberation!
Luddites Against the Domestication of Wild Nature-Mexico"

"Graffiti in opposition to domestication and in favor of animal, human and earth liberation was painted on many walls in Mexico State, as a way of spreading anti-anthropocentrist ideas.

"On March 14 several businesses that engage in animal exploitation were glued and several telephones of the biocidal Telmex company also suffered damage by the Luddites Against the Domestication of Wild Nature.

"The Luddites Against Domestication of Wild Nature claim responsibility for the sabotage of 35 phones of the biocidal Telmex company on April 11.

We have also sabotaged another Telmex phone by placing an incendiary device made especially for the telephones of an earth-destroying company.