AAA occupied Blue NG offices on Friday 17th, Via Campesina Day, in solidarity with millions of peasant land-workers demonstrating globally against agrofuels. Blue NG are committing a crime against humanity and the planet by using misinformation* to win support for the new market of agrofuel power stations, when virtually all agrofuels have been shown to cause ecosystem destruction, accelerated climate change & food poverty. 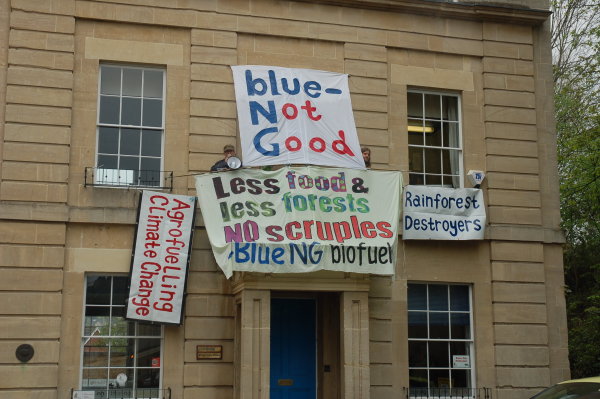 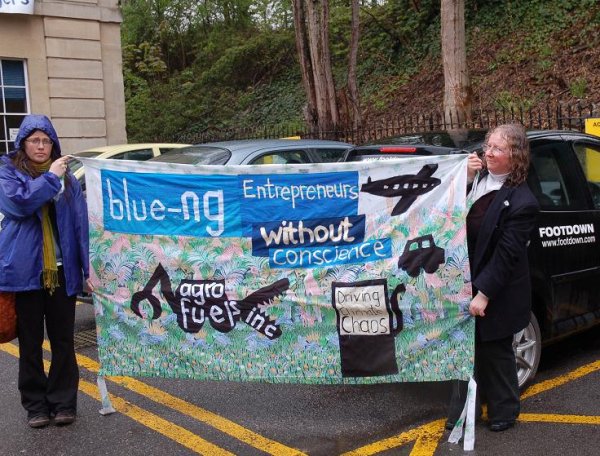 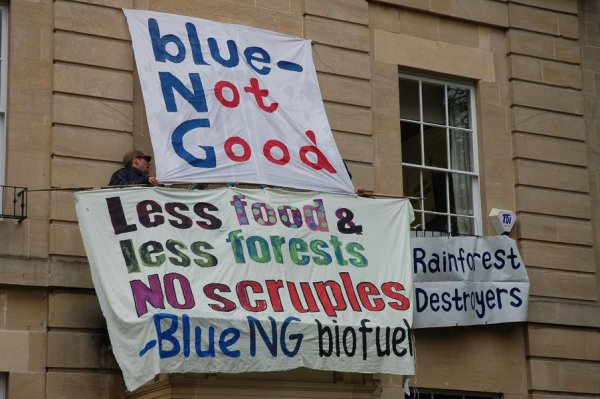 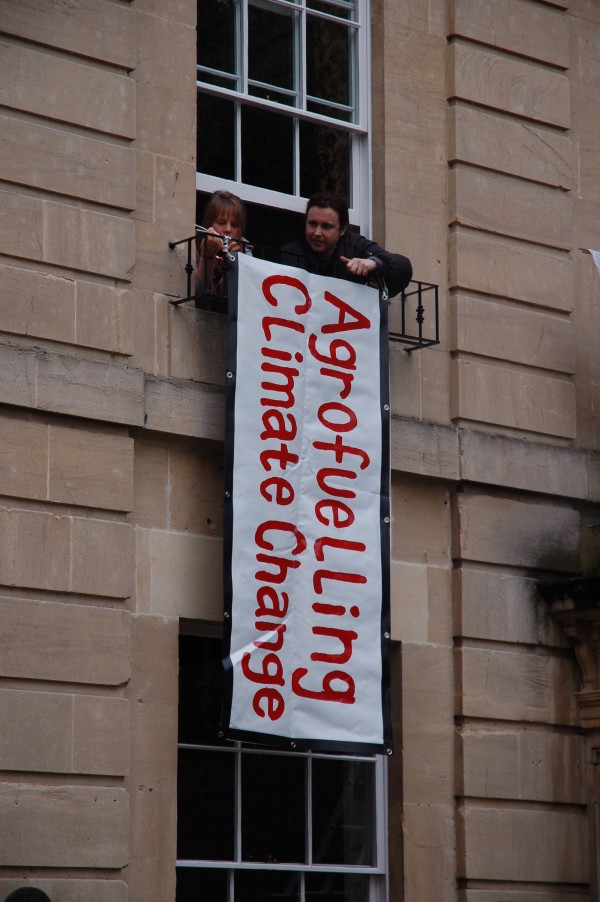 * For more on Blue-NG misinformation see…

On 17th April 2009 13 climate and social justice activists occupied the head office of Blue NG, the company which is planning to build the UK's first biofuel power plants. Banners were hung from the building and activists demanded that the company stops investing in biofuels.

BlueNG initially plans eight power plants which would run on virgin vegetable oil. Campaigners warn that those power plants will significantly boost the UK's imports of palm oil, which is linked to deforestation and the displacement of rural communities, including indigenous peoples. Blue NG speaks about using rapeseed oil but has failed to rule out using palm oil. In Germany, 1.3 billion kWh of energy are produced from palm oil burning because this is the cheapest vegetable oil and German providers have found it impossible to afford rapeseed oil.

We are here to demand that you stop investing in agrofuels. We need truly renewable energy but calling pesticide-sprayed monocultures for biofuels renewable is obscene.

Already, small farmers and indigenous peoples are being evicted, far more people are going hungry and ever more forests and other diverse ecosystems are being destroyed in order to grow fuel for our cars. While hundreds of civil society groups and institutions, including he European Environment Agency, our Environmental Audit Committee, the UN Rapporteur for the Right of Food and even the OECD were against Europe's biofuel targets for transport, your company was drawing up plans to further push up an already completely unsustainable demand for biofuels.

Soon after scientists published studies which unequivocally show that today's agrofuels are disaster for the climate and that using land for agrofuels means less ecosystems and less food, you published your plans to build the first vegetable oil power plant in Beckton. It so happens that, in Beckton, asthma levels are already exceptionally high, almost certainly due to air pollution.

You then made false and misleading claims to garner political support for those destructive plans. Many people liked what you said about combining geo-pressure and combined heat and power, yet your two published planning applications involve neither – as for CHP, you don't even plan to supply heat to properties or industry. But even if those claims had not been false, the energy will still come from one of the most destructive and climate-damaging types of fuel.

You continue to make false statements about the fuel you will use. You tell media reporters you have a sustainable sourcing agreement – yet the party you claim to have that agreement with knows nothing about it. Just this month, you published claims that you could power your plants from half a million hectares of set aside land in the UK and that this would be climate-friendly. This is absurd – as anybody in the industry must know, most of that set aside land has already been ploughed up in what even Defra fears is a disaster for our biodiversity. And far from being climate-friendly, rapeseed oil is grown with so many fertilisers that it's up to 70% worse for the climate than fossil fuel oil.

Your biomass policy boasts that you will minimise indirect impacts. Not surprisingly, you haven't told anybody just how you plan to do that – after all nobody else has come up with any credible ideas for this either. Except for one study which makes it clear that the only way that could be done was by making sure less food was grown and more people went hungry. Is this what you mean when you say “If we are going to be successful in our fight against climate change in the context of an economic downturn and rising energy and food prices, we have to make some hard choices.”? Though the only success this project might bring is profits, no other benefits.

And finally, the reason we are here on this particular day is that we wish to support the International Day of Action called by Via Campesina, in memory of landless farmers killed in Brazil on the same day in 1996. Via Campesina and many other groups rightly demand policies which support food sovereignty, not monocultures to grow fuel for Europe, and rights and support for small farmers and for biodiverse, organic farming which truly helps to counter climate change. Biofuel companies like Blue NG are undermining our hopes for an agriculture system which can feed people, reduce climate change, safeguard biodiversity and support communities' rights and livelihoods. Your choices are your responsibility and we demand that you stop all support for agrofuels. We will not stop campaigning until you stop your support for agrofuels.