Paul Watson - We Need to Stop Eating the Oceans

The fisherman has now become one of the most ecologically destructive occupations on the planet. It's time to put aside the outdated image of the hardy, independent, salt-of-the-sea, and hard-working fisherman working courageously to feed society and support his family. 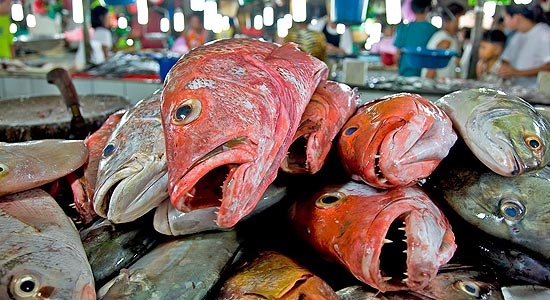 The Oceans are like the Goose that Laid the Golden Egg. As long as it was alive it laid a golden egg each day but then the greedy farmer decided to kill it to get all the gold inside and found nothing and the Goose laid no more golden eggs because it was dead.

For centuries, the oceans have fed humankind. But in the last century, human greed has raped and pillaged oceanic eco-systems remorsefully with an ecological ignorance that is staggeringly insane.

I don't eat fish because I am an ecologist and I have seen the diminishment of fish in the seas all of my life. I was raised in a fishing village and I was raised on a diet of cod, sardines, mackerel, smelts, clams, lobsters, flounders, and trout. I have seen with my own eyes the steady diminishment of fish, lobsters, and crustaceans. And what I ate as a child I choose not to eat today for the simple reason that there are to many of us on land eating so few of them that live in the seas.

The fisherman has now become one of the most ecologically destructive occupations on the planet. It's time to put aside the outdated image of the hardy, independent, salt-of-the-sea, and hard-working fisherman working courageously to feed society and support his family.

No longer does the average fishermen go to sea in dories with lines and small nets. Today's industrial fishermen operate multi-million dollar vessels equipped with complex and expensive technological gear designed to hunt down and catch every fish they can find.

One manufacturer of electronic fish locators (Rayethon) even boasts that with their product, "the fish can run but they can't hide."

And for the fish, there is no safe place as poachers hunt them down mercilessly, even in marine reserves and sanctuaries.


We humans have waged an intensive and ruthless exploitation on practically every species of fish in the sea and they are disappearing. If we don't put an end to industrialized fishing vessels and heavy gear very soon, we will kill the oceans and in so doing, we will kill ourselves.

Scientists this week revealed that widespread malnutrition is affecting the fish, bird, and animal populations of our oceans. Not only are we depleting their populations, we are starving the survivors.

With other factors like increased acidification, global warming, chemical pollution, and ozone depletion causing plankton populations to decline, we are waging a global assault on all life in our oceans. The fish cannot compete with our excessive demands. We have already removed 90% of the large commercial fish from the sea. Chinese demand for shark fins is destroying practically every species of shark in the ocean.

Whereas the fishing industry once targeted and destroyed the large fish, they are now focusing on the smaller fish, the fish that have always fed the larger fish. Of the top ten fisheries in the world today, seven of them now target the small fish. If the fish are too small to feed to people, they are simply ground up into fishmeal to feed domestic animals and farm raised salmon or tuna.

Aquaculture has also now emerged as the most wasteful utilization of fish and is the economic engine driving the intensive exploitation of small fish.

And now Japanese and Norwegian fisheries are extracting tens of thousands of tons of plankton from the sea to convert into a protein rich animal feed.

This week a report on the State of the World Fisheries and Aquaculture released by the U.N. Food and Agriculture Organization (FAO) concludes that 80% of all marine fish stocks are currently fully exploited, overexploited, depleted, or recovering from depletion; including stocks of the 7 largest prey fisheries. Very few marine fish populations remain with the potential to sustain production increases, and more have now reached their limit than ever before.

The Sea Shepherd Conservation Society is not taking an animal rights position on this issue when we say that people must stop eating fish and stop eating meat that fish are fed to. Our position is based solely on the ecological reality that commercial fishing is destroying our oceans.

We all know this. We are all aware of this diminishment. We feel it in our gut. The ecological reality is not only staring us in the face, it is kicking us in the teeth. The problem is that we are in absolute denial and we refuse to acknowledge that by stripping life from the seas, we will be undermining the foundation for our survival on land.

This denial is so entrenched that even Greenpeace serves fish to their crew onboard their ships while undertaking campaigns to oppose over-fishing.

The Kaiyapo people of Brazil call those who destroy the forests "termite people" because they gobble up the trees. In the oceans we have human parasites sucking the life out of the ocean and giving nothing back. We humans have become the parasitic bloodsuckers of the ocean and when we kill our hosts, as we will surely do the way we are presently going, then we ourselves will die.

For a long time, I wondered why I even have bothered to speak out about these concerns to a society that refuses to acknowledge this reality and simply dismisses any talk of over-exploitation as radical extremism. For decades, I have endured this extremism of apathy and ecological ignorance.

This last week in Paris at the Sustainability Conference I spoke of these things to a room full of journalists and when I called for a closure of all commercial fishing in the Mediterranean, I was pleasantly surprised that not a single journalist disagreed nor questioned me for making such a radical demand. In fact, my announcement was greeted with applause.

The public is becoming aware of the gravity of the ecological predicament that threatens life in the sea. And this is very encouraging. I can't think of anything more important than the preservation of diversity in our oceans. Perhaps we can adapt to global warming, and perhaps we can survive a mass extinction even of species on land. But I know one thing to be an ecological certainty and that is if we kill the oceans - we kill ourselves.

In diversity is the preservation of life.

We must stop eating the oceans. Eating fish is for all intents and purposes - an ecological crime. There are no oceanic sustainable fisheries - not a one. That little sustainability card that some people carry around to pretend to be ecologically correct consumers is simply a fraud, an attempt to make us feel good as we continue to eat the seas.

Now I know that some people are not going to like what I am saying, but then again, I have never written or spoken for the purpose of winning popularity contests. I don't try to be all things to all people. I aim to be ecologically correct in my thinking and from any perspective that I have viewed it. That, coupled with my observations of the steady and now escalating diminishment of life in the sea since I was a boy sitting on the end of the dock in Passamaquoddy Bay to now, and where I voyage through all the oceans of the world trying to defend life in the sea, I see the writing on the wall in big bold letters. The signs look ominous indeed, dangerously so.

Some may think that a call to ban all commercial fishing is radical. I view it as a very conservative and essential policy that we must implement to save the oceans and ourselves.

Am I concerned about the fishermen and their families? I am not without sympathy for their situation but I am far more concerned for the future survival of humanity and the oceans. We simply need to put an end to an industry and an occupation that is literally undermining the life support systems of this planet. This requires sacrifices, but sacrificing a job is preferable by far than sacrificing the future for all of us.

We need to consider the needs of the fishes and we need to give them the space and the time to recover from the terrible slaughter we have inflicted upon all the species that live in the sea.

I am tired of hearing the excuses of fishermen that the seals or the dolphins have diminished the fish numbers. They want to take us for fools to buy into this unscientific scapegoat argument. The fish are gone because they, the fishermen, took them, and took them and took them without mercy. And now like Wall Street bankers they come begging for subsidies and getting them because politicians for the most part suffer from homopechephobia, or a political fear of fishermen, who if they don't get what they want tend to riot and threaten.

They need to be treated as the ocean destroying thugs that they are. The fishing industry needs to go extinct before they cause a pattern of irreversible extinctions and loss of diversity in our oceans.

If an ecological collapse occurs because of the removal of a pivotal species or species, we won't be worrying about jobs. We'll be worrying that our fellow man will be hunting and eating us. If that occurs, the words that Jesus Christ once said would have become perversely very true indeed when he said to the fishermen, "I will make you to become fishers of men." (Mark 1-17) 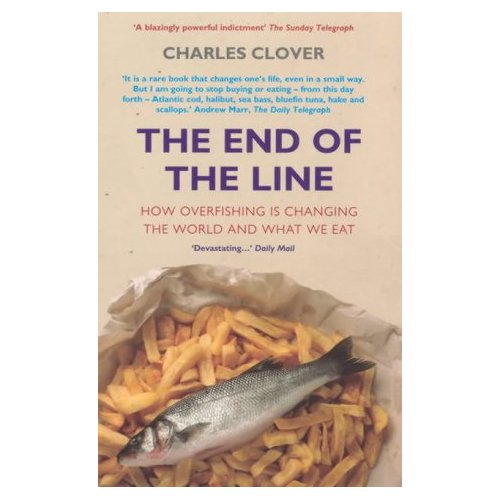 The oceans are dying, but we can keep them alive with lots of effort towards shutting down wasteful practices. Here is an interesting book on the subject and later this year the film 'End of the Line', about overfishing will premier in the UK:

" Eco-documentaries tell the stories of our time,” said Rupert Murray, director of “The End of the Line,” another feature-length film based on a 2004 book by Charles Clover, the environment editor of London’s Daily Telegraph. Mr Clover’s research exposes the effects of overfishing on oceans and those who depend on them for food. See: