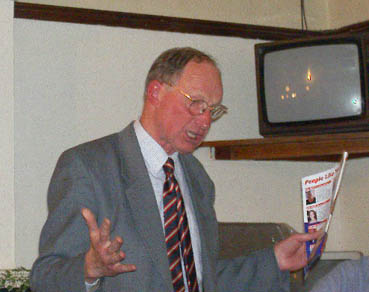 The guest speaker for the night once again is Richard Edmonds the former deputy leader of the party under the John Tyndall regime.

Former teacher Edmonds has a string of criminal convictions:

In 1988, The Sunday Times revealed that Holocaust News, a publication that claimed The Holocaust was an "evil hoax", was being published by Edmonds, on behalf of a BNP front organisation, the Centre for Historical Review, and distributed by members. The theme was returned to on 8th April 1991 edition of Panorama where Edmonds described the publication as 'a wonderful statement of the truth'

Edmonds also spent time in custody over a racial attack in 1993 and had previously been convicted for smashing a statue of Nelson Mandela on London's South Bank. Further controversy came in 1993 when he told The Guardian that 'we [the BNP] are 100% racist'.

Surprisingly to some, Edmonds was co-opted by Nick Griffin onto the BNP's Advisory Council in September 2008, thereby returning him to the top tier of the party and ending his period of apparent dissidence.

Edmonds was due to address a North Kirklees meeting at the Royal Hotel back in November 2008, however down to pressure from antifascists the meeting was called off.

Because of the meeting cancellation the North Kirklees organiser at the time Ian Roper was sacked by Yorkshire organiser Adrian Marsden.

As The Royal is a Free House we are asking people to ring the pub and POLITELY lodge their complaint with the management.

We have proven already what can be done in November.

For more information on Richard Edmonds see this website.