Following the shenanigans at the previous Barclays demo (

http://www.indymedia.org.uk/en/2009/04/428175.html), we decided to do the decent thing and visit them twice this week to show that police harassment doesn't deter committed campaigners from educating the public about the unspeakable horrors perpetrated upon animals inside Huntingdon Life Sciences, supported by blood money from Barclays Bank. 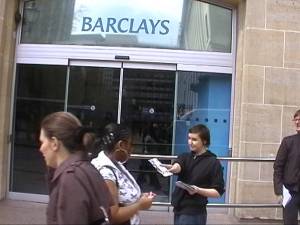 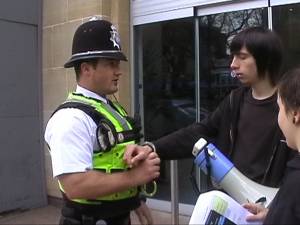 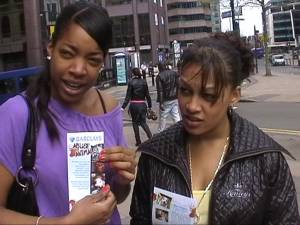 Our Wednesday demo (we usually visit them each Friday) was unannounced and judging by the lack of police conveniently hanging around the area, unexpected too. We had the banners set up and using the megaphone before anyone even realised we were there. Taking them unawares meant we had ten or fifteen minutes of free time with them - before the usual quota of police arrived - and boy did we put this time to good use!

Members of the public stopped to chat and take leaflets and yet more Barclays customers decided to close their accounts after learning that Barclays supports disgusting animal abuse at Huntingdon Life Sciences via their share holding on the NYSE.

After a good fifteen or twenty minutes of public education (and bank condemnation) the law decided they could stop worrying about other crime in the area and turn out in force to deal with our group of peaceful though noisy protestors.

Once again the police seemed confused about the law, telling us first of all that the megaphone couldn't be used as it contravened noise pollution by-laws. We disputed this and agreed with the CPSO who suggested such that she should call upon a noise pollution officer to come down and assess the noise levels. Whilst waiting for this alleged visit, 'real' police turned up and said the use of the megaphone was against Section 5 of the Public Order Act......then decided it wasn't.....then decided to arrest an activist for using the megaphone anyway!

This police attention had the welcome effect of attracting yet more people to us to find out what was going on. Needless to say, all of them were disgusted when they heard the reasons for our being there and for the arrest - some decided to join in with the chanting.

We stayed around Barclays (minus the activist who had been arrested and the megaphone which had been seized) for another hour or so, before setting off to Steelhouse Lane police station to enquire about our arrested friend.

A very long vigil outside the police station ensued - various officers kept popping out to ask how long we were going to remain there to which we always replied "Until you release our friend!". However, at 1am in the morning we were informed that the arrested activist was being detained overnight to be put to the court "sometime after 9.30 this morning". Accepting this to be the case, we ended our vigil around 1.15am and then attended the court at 8.30am to ensure our arrested colleague had legal representation and moral support.