Sea Shepard Documentary - Whose side are you on?

A documentary is to be shown on the Discovery Channel on monday, 9pm which will feature footage of the Sea Shepard crew in action against the Japanese whaling Fleet. 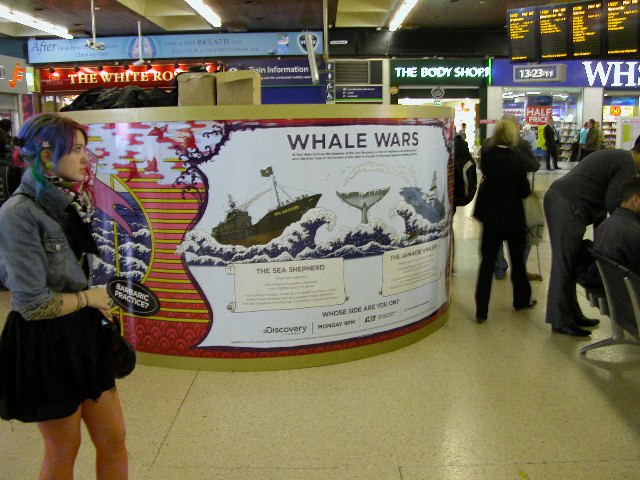 Although this documentary has been commisioned by and is to be shown on a commercial television network, the filmmakers have tried to illustrate the front line in the battle for conservation of the seas with unprecedented access to the Sea Shepard crew. The documentary also follows the whalers and invites the audience to decide "Who's side are you on?". The hope of those concerned with animal rights is that it will draw attention to the long running battle to stop the annual slaughter of whales in the name of "scientific research" by the Japanese.

A spokeswoman from the discovery channel told Indymedia that the program makers have tried to treat each side of the story with equal weight and let the audience decide if the crew of the Sea Shepard are heroes or terrorists. A quote on promotional literature being handed out at Leeds train station, attributed to the crew exclaims:

We will use any means necessary in our fight to save the whale.

We are enforcing international conservation law by launching missiles, ramming and disabling whaling ships and being taken hostage"

The reverse of the document shows the whalers branding the organisation terrorists for the same reason.

Whilst this writer certainly does not wish to give free advertising to a corporate media network, it is worth pointing out that a heightened public awareness that will result from the showing of this documentary will provide a good opportunity for this often forgotten and maligned struggle to be cast into the fore

For further information on Sea Shepard, visit their website at: