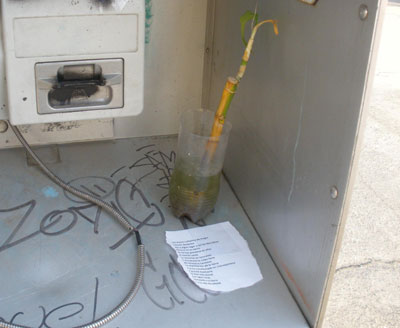 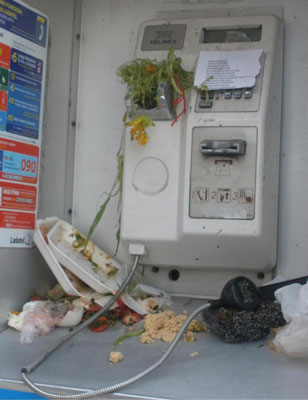 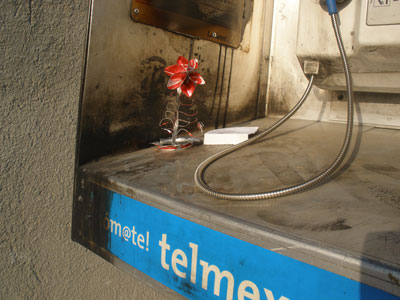 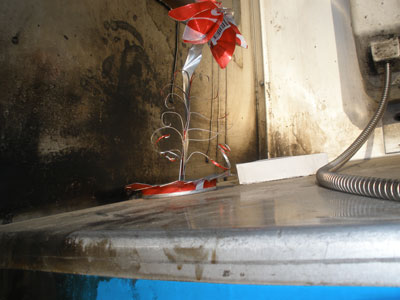 "Greetings from Mexico:
We are the group 'Art as Crime, Crime as Art' from several municipalities in Mexico State.
We know very well the atrocities that Telmex commits as an earth-destroying company and as a sponsor of bullfighting. Because we are conscious and do not want to stay passive before such a situation, we have sabotaged different Telmex booths, but in a different, imaginative way and with the end being to make known to the people who cooperate with Telmex what goes on behind the scenes at that company.
Our actions were:

+ The handset of a phone booth was sabotaged, a little object made of almost-dry bamboo plant was left in a battered bottle filled with dirty water, beneath it a small writing was also left:

I leave you this plant
with green water
Similar to the planet
In the decadent life ...

+ A telephone cable was sabotaged, and the opening where the card is placed in order to speak was blocked-up, making using it impossible; trash was spread about and a little message was left:

Greed, greed and more greed
Produced by civilization
Deposit your garbage here
Or begin your own destruction

+ A phone booth was sabotaged with fire (which left it badly damaged) and a small object was left which consisted of a flower made from an aluminum can and the following message was left:

It is true that the future
Will be strange
Will be very dark
And from a can there will now be flowers ...

This is only a demonstration of what our group has begun to do against Telmex, with poetic terrorism, the sabotage of art, imagination and the desire to destroy all that is harmful to us.

"Dominating, speciesist consumerism has great strength in Mexico and Guadalajara.
The ignorant people consume products without knowing their origin and the pain that they contained, sometimes the people do not care because they get so much pleasure in having an animal in their mouth!

That is why the FLA Mexico went out during the early morning hours of Tuesday, April 21 to glue these businesses to stop the consumption. The attacks consisted of simple devices and among the businesses were meat markets, a restaurant that serves meat, an aquarium shop, a dairy shop and other sites.

This action was small but we must always be a problem for those who exploit the earth and the animals!

"ACTION AGAINST THE FASHION COMPANY 'EBBINGHAUS' IN BERLIN/POTSDAM (GERMANY)

IN THE NIGHT FROM THE 14th TO THE 15th OF APRIL 2009 AT TWO OF THEIR OUTLET STORES WINDOWS WERE ETCHED. WITH THE LIQUID AMMONIUM BIFLORID 8 WINDOWS IN POTSDAM AND 10 WINDOWS IN BERLIN WERE ETCHED. THE COMPANY SELLS A BIG AMOUNT OF JACKETS WITH FUR EVERY AUTUMN/WINTER. IF THEY DON'T STOP THEIR BLOODY BUSINESS WE WILL.