Jerry Vlasak, MD is a board-certified surgeon specializing in trauma and critical care and a press officer for the North American Animal Liberation Press Office. He is a former vivisector who has seen the agony of animals in laboratories. He debates the scientific invalidity of animal experimentation around the world, speaks out about the benefits of a vegan diet and offers lectures on the right of all sentient beings to live free of pain and suffering.

His essays and interviews have been published in numerous journals and magazines and he has been interviewed on radio, TV and in print by journalists worldwide regarding animal rights. He resides in Los Angeles. 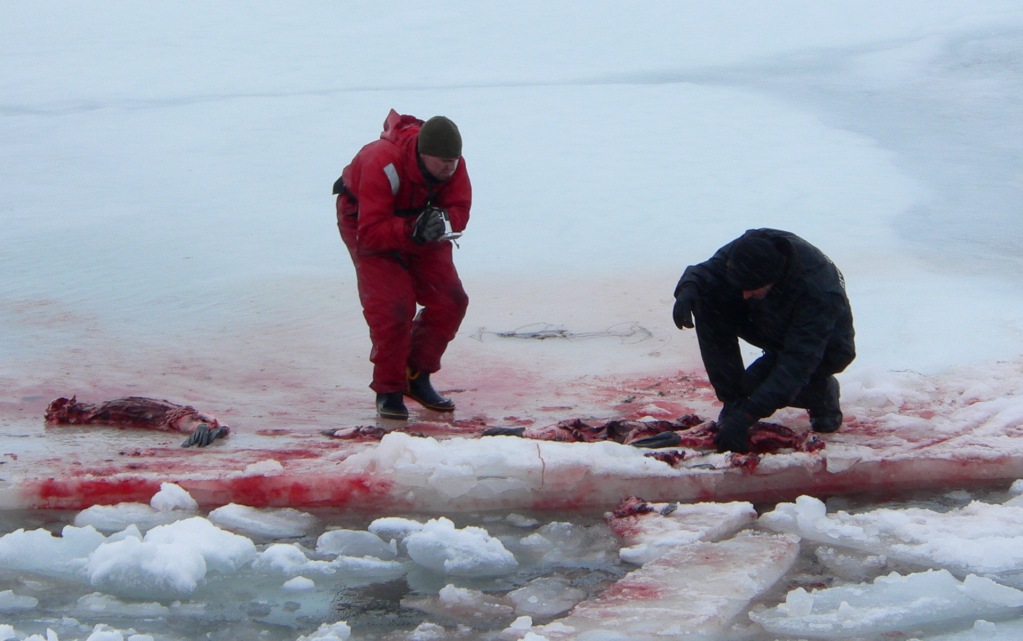 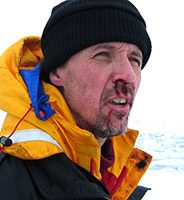 And here he is after one of the sociopathic sealers punched him in the face…..

1.) Was there any one defining moment during the time you were a vivisector where your views changed?

Although after spending a year killing animals, gathering data and writing papers I realized nothing I did would ever help my human patients, it was not until 2 or 3 years later that I realized the moral implications of taking lives to try and improve other lives. Reading books by Tom Regan and John Robbins solidified my beliefs and let me rid myself of speciesism.

2.) Looking back now, do you regret being involved in vivisection?

3.) Do you think there is ever any valid reason to test on animals?

If one was making an attempt to help an individual animal by trying a new technique or drug, when all else had failed, that could be justifiable. Just ask the same question and substitute “black people”, or “mentally handicapped children” for “animals”. Unless you are a racist, or a sexist, or a speciesist, you will understand the rights of those weaker than yourself cannot be subjugated.

4.) When did you decide to become vegan and how long have you maintained this lifestyle?

1993, after reading “Diet for a New America” by John Robbins, son of the founder of the Baskin and Robbins ice cream stores.

5.) Why is the vegan diet a good choice for our society?

A vegan diet avoids the needless exploitation, torture and killing of non-human animals. It is also a healthier diet for humans- the majority in our society die pre-maturely from heart disease, stroke and cancer, the vast majority of which is preventable by avoiding a meat-based diet high in saturated fat and cholesterol. In addition, raising animals for food adds more CO2 to the atmosphere than the entire transportation industry, and wastes immense amounts of water, topsoil and other scarce resources.

6.) The Animal Liberation Front is listed as “terrorist threat” according to our government. Why do you believe this is so?

Whenever any organization successfully threatens the status quo, those in power label them “terrorists” in order to try and destroy them. Whether its the Israeli Zionists calling Palestinians terrorists for fighting to reclaim their stolen lands and dignity, the Apartheid government of South Africa calling Nelson Mandela a terrorist for daring to oppose their racism, or animal abusers calling those who risk their freedom to free non-humans from slavery, torture and murder terrorists, its an age-old pattern of rhetoric aimed at maintaining oppression that benefits the powerful.

7.) What would you say to people who say there are better ways of going about all of this? Such as contacting your local governor or lobbying congress?

For well over 100 years animal activists have tried the usual peaceful approaches to stop animal abuse. More animals suffer and die today than ever before. Every successful liberation struggle has had to use force to stop the oppressor from abusing, exploiting and killing those who it could control, and the struggle for animal liberation is no different.

8.) In this day and age, how do you believe society views animals?

Most people view animals as property, much the same way black slaves were viewed by most people 150 years ago in this country. No matter how many people see animals as objects to do with as they please, they are wrong to do so.

No one thinks non-human animals should have equal rights as humans; what good would a driver’s license or the right to vote do to a dog or cat or monkey. But non-human animals have a right to live out their lives as they see fit, and to not be exploited, imprisoned, tortured and killed by humans for their personal entertainment, greed or any other reason.

10.) What would you say to someone wishing to be involved in this movement?

Get together with others they can trust of like mind and just started do actions to help those animals around them locally that are imprisoned and/or being exploited. To begin learning about direct action, they can follow the links from here where they may take them. Only they can decide what action to take, when to get started, and how much longer the animals must wait for liberation:

“When a person places the proper value on freedom, there is nothing under the sun that she will not do to acquire that freedom. Whenever you hear a person saying he wants freedom, but in the next breath she is going to tell you what she won’t do to get it, or what he doesn’t believe in doing in order to get it, he doesn’t believe in freedom. A person who believes in freedom will do anything under the sun to acquire…or preserve his freedom.”– Malcolm X