Nottingham AR for Animals in Laboratories

As World Week for Animals in Laboratories draws to a close for another year, we can reflect on the on-going suffering in Nottingham and further afield. 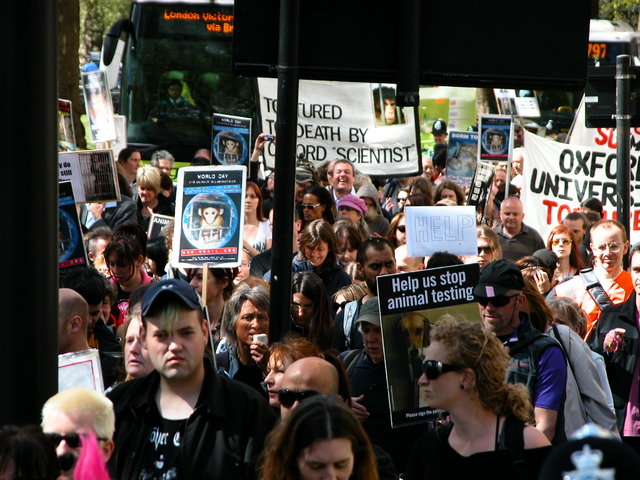 Nottingham Animal Rights supporters began World Week for Animals in Laboratories with a picket at the Medical School at Nottingham University, located on the top floor of the QMC building - the floor without windows.

Although much of what goes on is clouded in secrecy, and it may be many years since animals as large as horses were said to have been carried by freight lift to the top floor, Animal Aid's 2006 Mad Science Award reported a University of Nottingham study where rats' screams of pain were recorded:

"In a collaborative behaviour study with the University of Ireland, male rats were injected with formalin - a toxic chemical that causes considerable and lasting pain. They were then put inside a perspex chamber that administered repeated electric shocks to their feet. A microphone was placed above the chamber to record the rats' cries of
pain, communicated in ultrasound."

Catering was provided as ever, by Nottingham's Veggies Catering Campaign, who were delighted to share the streets with two other newly formed vegan catering campaign, Green Garden Cafe from Coventry and Fair Foods from Devon.

Pictures from the rally can be found at