In these times of escalating war on Afghanistan/Pakistan (Af-Pak) and crashing economy, the British military have opened a recruitment/showroom in low income Dalston, London. The showroom is "home to a virtual battlefield stimulator which gives vistors a chance to use their friends as target practice with a replica AF80). handgun (Go figure?). Outraged Mothers Against Guns, Lucy Cope, said it was grossly insensitive to house the showroom in a borough that has been plagued by gun violence." Hackney Gazette 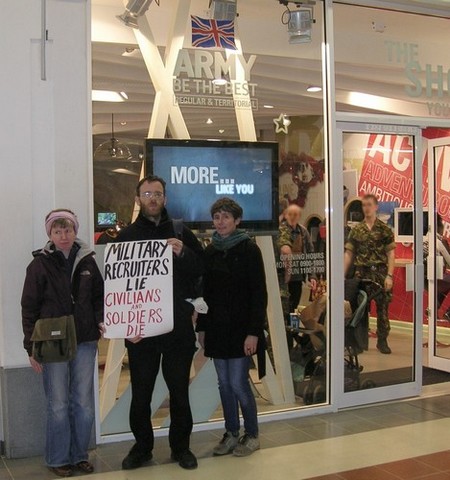 The showroom which is the first of its kind in the country provides a virtual battlefield simulator for use for 14 years and over. The British and Russian militaries are the only European militaries that recruit as young as 16. The military plans to open such showrooms across the country....next one is planned for Croyden.

The London Catholic Worker is located in Dalston and provides hospitality to refugees many who have fled wars seeking sanctuary. The CW community runs a soup kitchen for the homeless and a cheap cafe in the Dalston area www.londoncatholicworker.org

Catholic Worker founder Dorothy Day was imprisoned as an I.W.W. suffragette in WW1 for her anti-war opposition. She founded the anarcho pacifist Catholic Worker movement in New York City in 1933. There are presently 160 Catholic Worker communities in the U.S. and 6 in Europe. In the U.S., Catholic Workers were imprisoned in WW2 for draft resistance and were the first to burn their draft cards publicly at the beginning of the Vietnam War. Catholic Workers also participated in the Berrigan isnpired draft board raids of that period and the more recent plowshares actions

Catholic Worker Ciaron O'Reilly stated, "We come to vigil on Holy Thursday on the anniversary of the arrest and torture of Christ. To "vigil" in our tradition is to stay awake - the government would like us to be asleep to the escalting war on Afghanistan and Pakistan. We live in a time when governments don't need mass mobilisation and active public support to wage their wars, all they need from us, in places like London, is our silence and sedation. We've come today to snap out of it and nonviolently oppose recruiment to this escalating war by the U.S. and British militaries.

This showroom is where the rubber hits the road in our neighborhood in terms of recruitment of cannonfodder for this escalting war. It is sobering to stand here and read out the names and ages of the dead - British and Afghani.

I just had a chat here with a Russian passer a veteran of the Soviet war in Afghanistan - there's a lot to learn from such people. 20 years later, that war has not ended for him in terms of health, addiction and trauma, let alone for the suffering people of Afghanistan. We don't want live in a United States of Amnesia. We can learn a lot from Military families against the War and the military resisters in custody www.couragetoresist.org "

(Photo is Copyright (c) D. Viesnik 2009 but may be reproduced free of charge if for non-commercial / non-intelligence gathering purposes - e-mail vd2012-imc [at] yahoo.co.uk for high resolution version.)

On behalf of London Catholic Worker 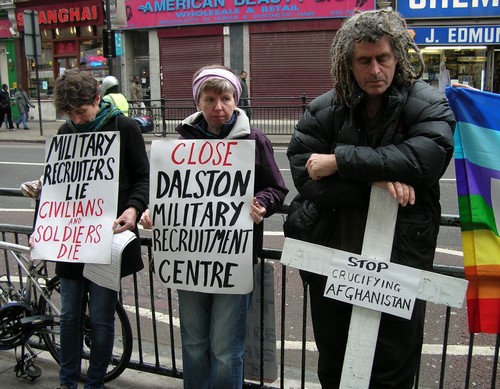 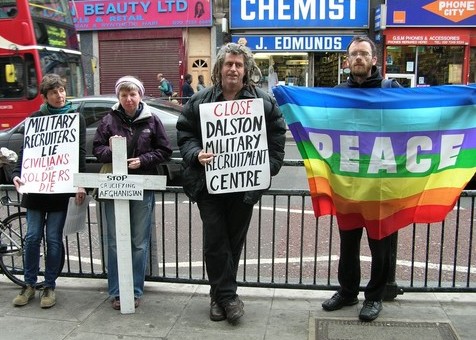 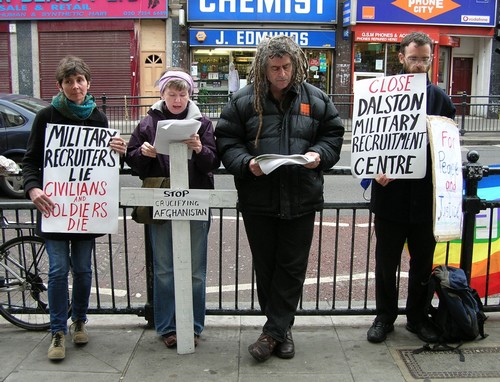 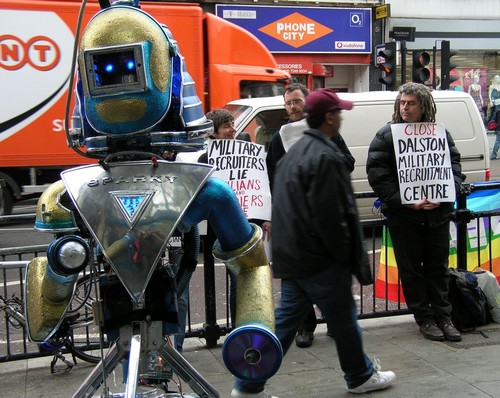 All images Copyright (c) D. Viesnik 2009 but may be reproduced free of charge if for non-commercial / non-intelligence-gathering purposes and credited to D. Viesnik. For high resolution copies, please e-mail vd2012-imc [at] yahoo.co.uk

On behalf of London Catholic Worker