GLBT Rights. Everyone Group Offers A Gift To The Ambassador Of Iraq In Italy

“We will soon be meeting His Excellency”, say the activists, “to discuss the situation of homosexuals in Iraq, the need to work towards peace in his tormented country, and the anti-Islamic sentiments rife in the West”. 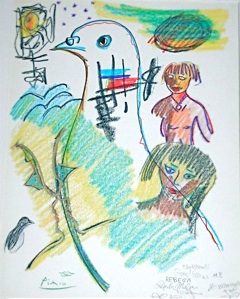 The artwork by Gruppo Watching The Sky / Gruppo EveryOne

“We will soon be meeting His Excellency”, say the activists, “to discuss the situation of homosexuals in Iraq, the need to work towards peace in his tormented country, and the anti-Islamic sentiments rife in the West”.

Rome, April 29, 2009 - The Ambassador of the Republic of Iraq in Italy, His Excellency Mazin Abdulwahab Thiab, is to meet the leaders of EveryOne Group, Roberto Malini, Matteo Pegoraro and Dario Picciau, to talk about the situation of human rights in his country, and the rights of homosexuals in particular. The Iraqi Embassy has shown itself to be open to a dialogue,” say the activists, “so we are presenting His Excellency with a gift: a work of art that represents the importance of dialogue, of peace and a respect for human rights”. The gift is a lithograph made by Pablo Picasso in Paris in 1957 upon which artists from persecuted minority groups have contributed with pencil and pastels: the young Roma girl, Rebecca Covaciu; the gay artist, Alfred Breitman; and activists from the Watching the Sky group. The Embassy of the Republic of Iraq in Italy is soon to receive the EveryOne activists to discuss the recent events that have bloodied Iraq and the local legislation that condemns homosexuality as a serious crime. His Excellency is known as a man of peace, a man dedicated to the ideals of equality and universal brotherhood. We believe we can begin a dialogue with him with the aim of improving the condition of homosexuals in Iraq, a situation which has become dramatic. However, we also wish to tackle a rather delicate subject, and that is the spread of anti-Islamic sentiments in the West (and particularly rife in Italy) as is evident from the 2009 report compiled by the European Fundamental Rights Agency. We will also discuss the urgency to work towards peace in Iraq, a country racked by terrorist attacks.

Many gays have been sentenced to death by judges of the Republic of Iraq” continue the leaders of the international organization for human rights, “and are at present in prison awaiting the scaffold”. People throughout the world have been horrified by the recent cases of lynching of young gay men on the streets of Sadr City - a suburb in the south of Baghdad governed by the Shiite leader Muqtada al-Sadr. Six young people were murdered by their own tribal members for the sole reason of being homosexual, and in some areas of Iraq homosexual is considered a dishonour to be wiped out by blood. After torturing and killing the young men, the murderers hung cards around their necks with the word “Munharif” (pervert) written on them. The Iraqi activists of the Iraqi LGBT Group, which is based in London, have informed us that back in their homeland the crime of “lavat”(homosexuality) is punishable with up to seven years’ imprisonment, but in the case of repeated “crimes” the judges may impose the death sentence.


EveryOne Group holds great hopes in this meeting with the Ambassador, who enjoys great prestige in Iraq. Over the last few years our organization has undertaken (together with the most active organizations for gay rights (including Gays Without Borders and Certi Diritti) important campaigns against homophobia in Islamic countries and has prevented the deportation of the Iranian homosexuals Pegah Emambakhsh and Mehdi Kazemi. At the same time it has brought to the attention of the European Union the problem of GLBT refugees from countries in which religious homophobia lies at the root of ruthless persecution. “When we were attempting to save the life of young Makwan Moloudzadeh” continue the EveryOne activists, “we noticed that the movement for GLBT rights in the nations where Islamic fundamentalism dominates grew day by day after people witnessed the martyrdom of the young gay boy. Hundreds of gay men and women, journalists and activists protested against the criminalization of homosexuality - often risking arrest and torture. Makwan (who was murdered for loving a peer when he was just 13) has now become a symbol against the discrimination of gays. The short film we made in Makwan’s memory - thanks to the boy’s uncle - has been translated into the Persian language and is now being shown in democratic circles of these intolerant countries. It is to be hoped that Iraq, a country where civilization and democracy ferments alongside repressive ideologies, undertakes (thanks to its many enlightened figures, including His Excellency Mazin Abdulwahab Thiab) a virtuous path of civility and respect for minorities, thus becoming an example for all the nations in which homosexuality is still considered a crime or a perversion”.

In the photo, the painting presented by EveryOne Group to the Ambassador of Iraq: a universal symbol of peace and tolerance.

For further information:
EveryOne Group
www.everyonegroup.com ::