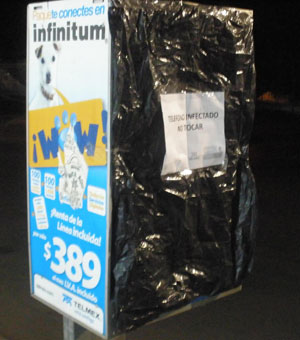 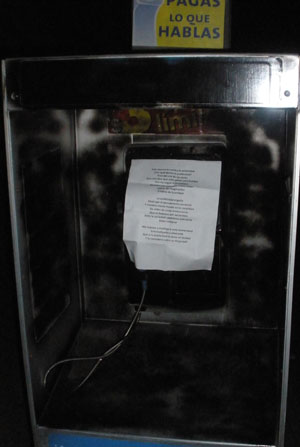 The group of immediate anti-speciesist direct action, 'Art as Crime, Crime as Art,' claim the following sabotage of Telmex phones:

+ The cable of a phone booth was sabotaged; black plastic was placed there and on it a sign with the logos of Telmex and the Ministry of Health and a message: 'Telephone infected. Do not touch!'

+ The cord of a telephone handset was cut, leaving it unusable, the cabinet was painted completely black and a writing was left on it:

I am disgusted and curse this human race
Stereotyped and alienated
That holds advertising as a deity
And considers it as their majesty!

We destroy anything that we do not consider beautiful, and we build the beauty of insurgency.
Passivity is not useful, it is only what the system wants us to do; we are savages and we will collapse civilization."

"In the early hours of April 18, 2009, after making our way through muddy fields we descended upon CSL Game Farm (7401 NW Kerkman Rd, Cornelius, Oregon) a breeder of 'game birds' for the meat industry. Outdoor pens housing pheasants and quail were opened giving the birds a chance to escape into the night sky. The exact number that got away is unknown, but we hope it is many.

We reject the anthropocentric world view, which regards non-humyn animals as commodities -- resources to be bought, sold and exploited for humyn interests.

We are not interested in 'welfarist' reforms for bigger cages and longer chains or menial legislation that only reinforces the status of non-humyn animals as 'property'. This is why we take direct action: to save the lives of animals here and now -- not standing on the sidelines waiting for others to act, but realizing that the only thing standing between an animal and its freedom is a latch on the cage door.

This action was inspired by and carried out in solidarity with Utah grand jury resister Jordan Halliday and all those who refuse to compromise in defense of all life on this planet."

"During the early morning hours of April 23, in a municipality in the State of Mexico, the Luddites Against the Domestication of Wild Nature and the Frente de Liberación Animal joined together in an action, deciding that we should step up the fight against the biocidal company Telmex. This time we placed an incendiary device at one of the front tires of a van which was responsible for maintaining different phone lines; this incendiary device did the job for which it was made and left the truck owned by Telmex unusable; when we returned to the area of action only the burnt remains could be seen.

The direct action is now claimed by the LCDNS and the FLA; we have joined our efforts and have hit hard, for the liberation of animals and the earth, destructive sabotage.

We want to take the opportunity in this communique to send a greeting to the cells of the ALF and the ELF in Guadalajara, different individuals have decided on illegal action for the anti-speciesist offensive in Mexico which is a huge step for the movement, continue on!

'And night by night when all is still / And the moon is hid behind the hill / We forward march to do our will / With hatchet, pike and gun!'
- Luddite Anthem

Against all that wants to dominate us LCDNS FLA - México"

"Rome, Italy
1. We have rescued a female dog used to produce puppies to sell.
2. Visited a training center for hunting dogs: carried away a cage for dogs, a wild boar head hung like a hunting trophy, and a gas cylinder; destroyed documents and hunting photos.
3. One sling shot, one window: broken sidelight of 2 meat vans, 1 fish van, 1 car used to deratization, 2 cars of hunters. Glued locks of a butcher shop. We attacked more times some of them"

The multinationals are some of the most powerful corporations on earth, where
the animals, the land and the people suffer because of their power and economic dominance.

The GUADALAJARA FLA, taking these positions into account, decided to cause a little fear in these insensitive people who abuse innocent beings. In the early morning hours of Sunday, the action consisted of placing a fake device outside a Burger King, and leaving a message 'pay attention to the consequences of your exploitation.' This caused the mobilization of the police, firefighters and bomb squad and likewise the mobilization of people and a wake-up call to nearby businesses. It is not just that this happens, strike the state!

TODAY IT WAS ONLY A FRIGHT, TOMORROW IT WILL BE REAL!"

Telmex, one of the companies belonging to the evil businessman Carlos Slim, is an earth-destroying company and also the largest sponsor of bullfighting events among companies such as Coca Cola, Corona beer, etc ... it is for this reason that we, a cell of the Guadalajara FLA, have sabotaged over 20 booths by various means.

There will be no peace for the dominators!