It's been touch and go this week as 28 year old hunger striker Parameswarn Subramaniyan's situation has gotten worse. Fearing that he could die, Mr. Subramaniyan has since agreed to end his hunger strike and talks are currently going on inside Parliament between the Foreign Secretary and the Tamil community. 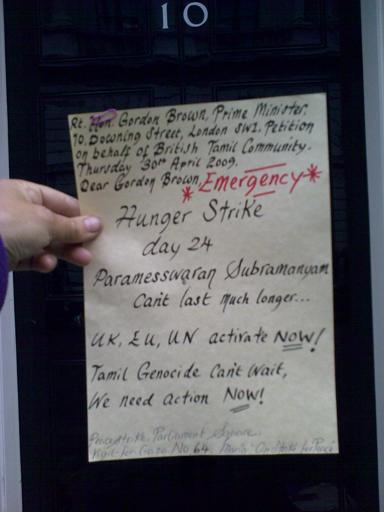 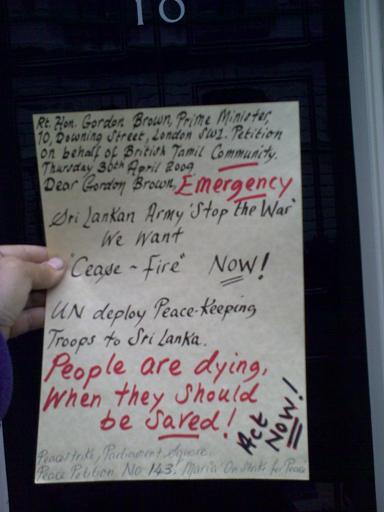 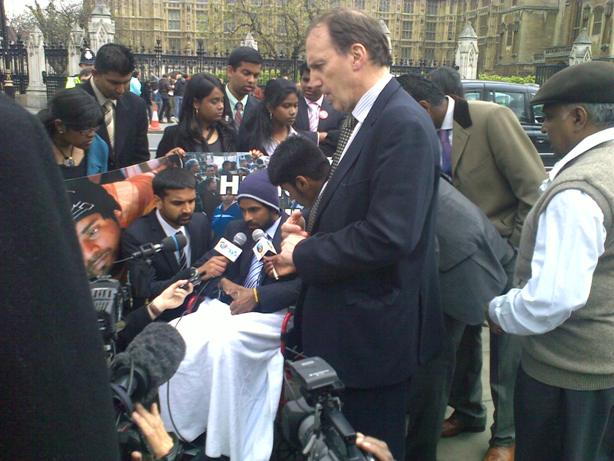 press conference - Parameswarn Subramaniyan is in the wheelchair 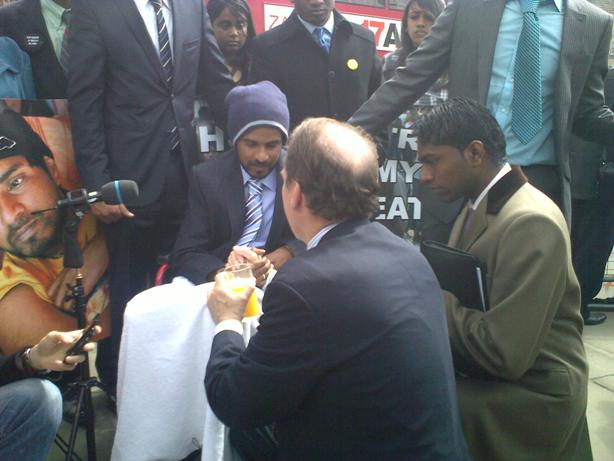 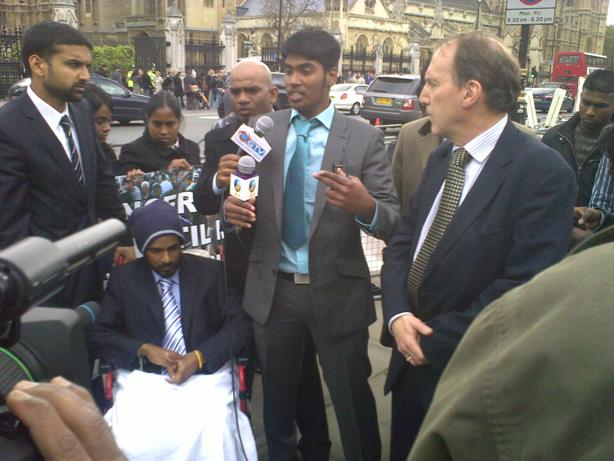 Twenty four days into his hunger strike for a ceasefire in Sri Lanka between the government and the Tamil Tigers, 28 year old student Parameswarn Subramaniyan from London has decided to start taking liquids and food again. He started his hunger strike and has not eaten solid food since Tuesday 7 April. This change came as the Foreign Secretary David Miliband agreed to one of the five conditions put to him by the Tamil protesters who have been occupying Parliament Square since Monday 6 April. Their protest started in response to claims that the Sri Lankan government has used chemical weapons against civilians in Tamil areas of the country. Over this month, the fighting has escalated with many casualties and hundred of thousands of civilians trapped without food or water.

Mr. Subramaniyan has lost family in the conflict and vowed to forego food and water until a ceasefire was declared or until death. At first, he also refused to take water. Following fears of organ failure, he agreed to take water. An ambulance and doctors have been on stand by and a tent has been set up for him to rest in. Over the last few days, Mr. Subramaniyan’s condition has deteriorated considerably and there were fears that he would not be able to hold out for much longer.

Simon Hughes MP has shown much support for the Tamil protesters and has acted as a go-between between the protesters and the government. He attended a press conference in Parliament Square this morning at which he announced that the Foreign Office had agreed to one of the conditions laid down by the protesters. Mr. Subramaniyan, who is no longer able to speak very much, said a few words and was well enough to sit up in a wheelchair before being taken by ambulance to hospital for a check up and is due to continue his participation in the protest later today.

A private meeting is being held inside Parliament this afternoon between the Foreign Secretary, other MPs and members of the Tamil community to come to an agreement as to what the government should do about the situation. Outside, in Parliament Square, over 100 protesters remain as part of this ongoing action over the past month. On Wednesday 29 April, Peace Strike held an emergency action to draw attention to the worsening situation in the country and to Mr. Subramaniyan's plight.

Earlier in the day, Parliament Square Peace Striker Maria Galletsegui presented a petition to Downing Street asking the government to show some compassion for Mr. Subramaniyan’s plight and to come to an agreement with the Tamil protesters. Although some efforts have been made internationally to broker peace in Sri Lanka, the Sri Lankan government earlier this week rejected the Tamil Tiger’s offer of a unilateral ceasefire and they have since vowed to fight to the end. Hundreds of thousands of civilians on both sides remain caught in the middle as the international community looks on.


(all pictures courtesy of Peace Strike)