It seems a new firm of corporate solicitors is edging into a patch long occupied by the bumbling Timothy Lawson-Cruttenden of Lawson-Cruttenden and Co. On 5th May, Norton Rose Solicitors organised a workshop for their corporate clients, entitled 'The Limits of Protest', on the pros and cons of injunctions. Norton Rose had apparently acted for Drax in obtaining injunctions against environmental protesters and are now setting themselves up as the new enemies of civil liberty. 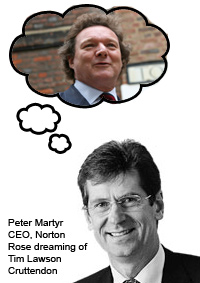 The workshop was chaired by Shami Chakrabarti, director of Liberty, and boasted a speaker from the Metropolitan Police. Norton Rose had also invited two activists who, back in 2006, embarrassed Timothy Lawson-Cruttenden (TLC) and beat his attempt to obtain a blanket injunction preventing anyone from entering a half mile radius of EDO MBM in Brighton for the purpose of protest. The three litigants in person in that case had argued that the PHA Act was being misused to restrict the right to protest and to assemble freely. Both activists have, of course, declined the invitation to participate in the Norton Rose workshop.

The PHA Act was drafted and made its way through parliament as a provision designed to protect vulnerable people from harassment. The media had been evoking emotional accounts of the effect of stalking and the need to protect vulnerable individuals. The Act was never portrayed as a law designed to protect corporations and restrict protest. Yet, that's exactly why TLC was involved in the drafting of the Act. The infamous solicitor has subsequently contributed to a book on its use in courts.

After the passing of the PHA Act in 2001, TLC got busy touting his services to corporations that were the subject of public protest. Needless to say, he never acted for any individual victims of stalking. Instead, he has twisted the PHA Act and engineered it to protect corporations from dissent. In the first case of its kind, Huntingdon Life Sciences (HLS), Europe's largest animal testing laboratory, applied for an injunction against anti-vivisection protesters. TLC successfully argued that the director of HLS, Brian Cass, 'represents' the interests of all of the HLS employees. Thus, HLS was regarded by the court as an individual, embodied by Brian Cass, who was being 'harassed' by protesters.

The idea that a corporation can be 'harassed' was yet another step in the centuries-long transformation of corporations into entities that enjoy the same legal rights as human beings but cannot be punished by imprisonment etc. as they are not human (for more on this, see Corporate Watch's acclaimed report Corporate Law and Structure: Exposing the Roots of the Problem).

In the HLS case, TLC argued in the High Court that HLS was not only a corporation being harassed, but that it could be harassed by everyone. HLS claimed it was not one person, or even several named persons, who were 'potential harassers'; it was everyone. The interim injunction was thus granted against all protesters. A 'protester' was defined as anyone who sought to demonstrate against HLS. The injunction restricted the time and duration of protests, the taking of photographs and the noise levels at protests, down to the settings protesters were allowed to set their loudhailers to. Breach of the injunction was punishable by up to five years in prison.

Following the HLS success, TLC went on to apply for injunctions on behalf of Bayer, DHL, Harrods, Oxford University, TNT and others that had been targeted by the Stop Huntingdon Animal Cruelty campaign (SHAC). An unprecedented relationship developed between TLC and the National Extremism Tactical Coordination Unit (NETCU), the police department charged with the repression of the animal rights activists, which happily supplied TLC with intelligence about the campaigns against which he was seeking injunctions.

In 2005, TLC decided to branch out and act for EDO MBM Technology to obtain an injunction against the Smash EDO campaign. But this is where things started to go wrong for the celebrity solicitor who went on using the same old tactics. In the process of attempting to bring the injunction, his unhealthy relationship with the police became apparent. Throughout the EDO case, TLC also acted in an incompetent fashion, suggesting that his previous success had only been due to his close relationship with NETCU. The injunction collapsed, leaving EDO MBM with over a million pounds of legal fees and having to pay the litigants in person over £30,000. News of TLC's failure spread quickly and the poor solicitor was sacked by Oxford University and Harrods. After an embarrassing media circus, TLC and Co. went on to obtain a toothless injunction for BAA in 2007 and are currently engaged in a losing battle to obtain an injunction preventing hunt saboteurs from monitoring a Sussex hunt, despite the fact that fox hunting is illegal.

Thus, with Lawson-Cruttenden's poor track record, the way is now open, it seems, for another law firm to move into the field of protest-busting injunctions. Norton Rose may well be vying for the position of NETCU's favourite stooges.