Ronnie Easterbrook has died in prison after 21 years of struggle

On Sunday 10 May, after a prolonged hunger strike, Ronnie Easterbrook has died in Gartree prison aged 78. Ronnie was an intransigent thorn in the side of the system for 21 years since he was stitched up by the police and sentenced to life imprisonment. 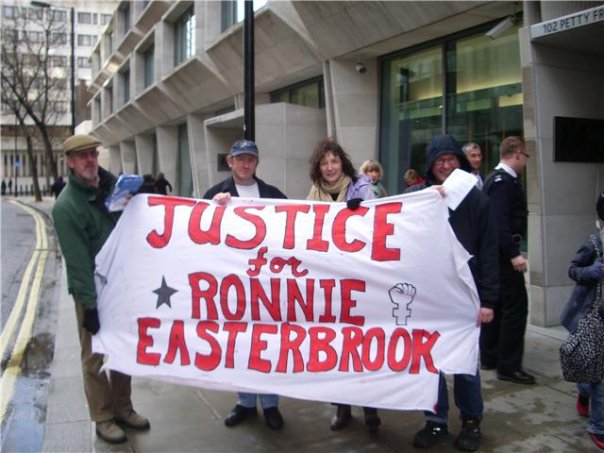 Demonstration for Ronnie earlier this year

Supporters of prisoners in struggle have known Ronnie since 1995 when he was in the seg unit at Whitemoor on dirty protest with Irish prisoners who were demanding repatriation. Since then he had been on repeated protests and hunger strikes in an attempt to draw attention to his situation.

Ronnie was sentenced to life for armed robbery and attempted murder in 1988 after a failed robbery on a supermarket wages van. A police informant set the job up and Ronnie and two others were ambushed by PT17, the elite tactical firearms unit. Tony Ash was shot dead, despite surrendering, and Ronnie, Gary Wilson and a police inspector all suffered gunshot wounds. Also lying in wait was a Thames TV crew, who captured the shoot-out on film.

Ronnie maintained he was a victim of a police shoot-to-kill policy, modelled on tactics used in the north of Ireland, but was prevented from putting forward a defence based on this, both by his own barrister’s refusal to co-operate and the judge’s refusal to allow a political defence. Throughout his sentence Ronnie refused to apply for parole because he did not recognise the legality of his sentence, and maintained to the end that unless he got a new trial justice would not have been done.

As Ronnie put it in a letter written from the segregation unit at Frankland to Fight Racism! Fight Imperialism! in 2005: ‘They say I am strong-willed, yet being right, even when one can prove it, as I can, is just a state of mind. If one had no principles it would be difficult, perhaps impossible, to carry on, but as I have always had good principles there is no question that I would ever accept the burden a corrupt state and judiciary have placed upon me.’

Those of us in FRFI, ABC and MOJUK who knew and corresponded with Ronnie for many years will miss him greatly. He was a great and stubborn fighter and had no truck with any of the Prison Service’s incentive schemes and other divide-and-rule games. He fought his own fight with unswerving determination and showed great solidarity and support for other prisoners in struggle.