Over 3000 innocent people were slaughtered in the so called 'safe zone' in the space of 24 hours by air bombardments between Saturday and Sunday, according to the Tamils in Parliament square; by Monday the number of dead had risen to 4000, which would bring the total of deaths up to 12.000 since January.*

Sunday more people began to gather in Parliament Square, and Monday the numbers had swelled and from 9.30 am people began blocking again the roads around Parliament, the only way for them to get attention to the genocide in their homeland and the UK politicians to intervene with the UN.

It is feared that the Sri Lankan government are determined to kill all of the civilians trapped in the so- called ' safe zone' in the Vanni region by the end of the month, more than 150.000 people are living under bombardments and have no way to get out and no access to food or medication, as the Sri Lankan army has sealed off the zone. The few who have managed to escape to government controlled areas have been put in concentration camps by the SLA. 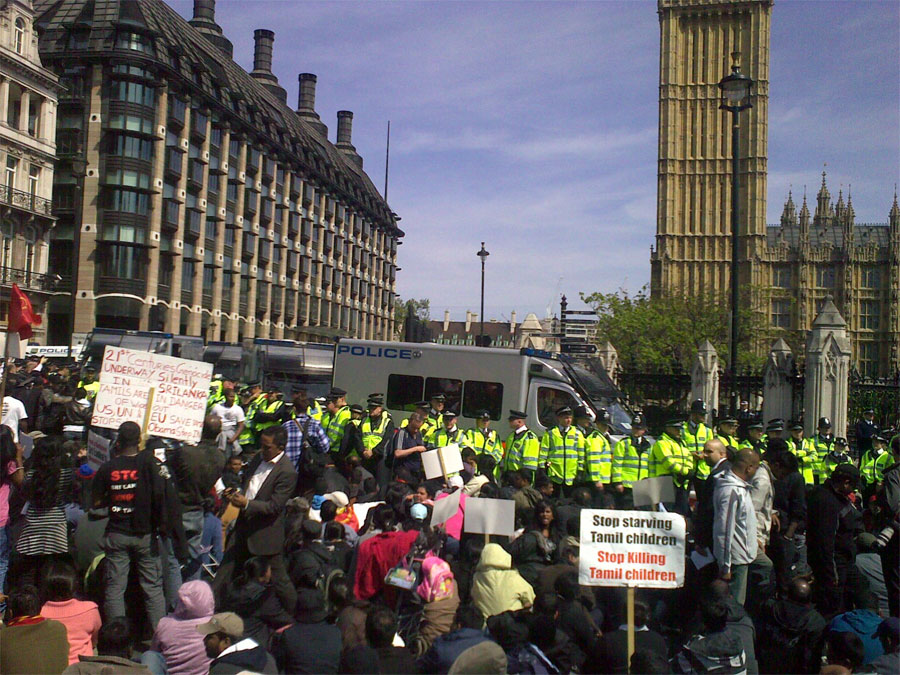 By noon all roads around Parliament had been blocked. By 2.30 the police started moving protesters, the City police asking them to move, the TSG using force towards those reluctant to move. By 3pm they started hitting people, picking protesters off the crowd, using police vans to cordon the crowd. Seven protesters who stood between the vans and a group of children were badly mishandled while the police picked them up and dragged them off the road. A British woman from the supporting group Together for Tamils suffered extensive bruising and was one of many who had to go to A&E later: luckily she did not suffer concussion or internal injuries but other protesters did! There are reports of people badly injured. The police brutality against people sitting peacefully did not spare children and elderly people. A baby was pulled out the crowd without his mother, a girl who saw pictures of family members lying injured in a hospital in the 'safe zone' was badly beaten by police, two journalists wearing NUJ badges were assaulted, one was thrown to the ground and threatened with arrest. The kettling tactics the police used on the crowd were most dangerous: most injuries were caused by people being pushed and falling on top of those behind; a number of people fainted because of being crushed: the police are saying they were suffering for dehydration but that's a lie, the protester had provided themselves with plenty of water!
At the end of the day, 63 protesters had been arrested, including a group of school girls and an elderly couple; most were later charged with obstruction of the highway.

The protest in Parliament against the genocide of the Tamils continues, 24/7: please go and support!

*note: Information from 'independent' sources is lacking, since all journalists and aid workers have been kicked out the killing area by the Sri Lankan government... according to the corporate media the dead are only a few hundred in the last 48 hours; since BBC & Co have no family in the area, where do they get their numbers from? Besides, there are reports from the ground from medical personnel who talk of thousands killed by bombing - see below.

Recent reports on the genocide in Sri Lanka: