The Speaker of Parliament has just made an announcement.

That a meeting will be held today about the disruption to Parliamentary business caused by demonstrations in the Square. The Tamils were mentioned. This little get together will include the Police, Westminster Council, the GLA, and the Speaker but no demonstrators. 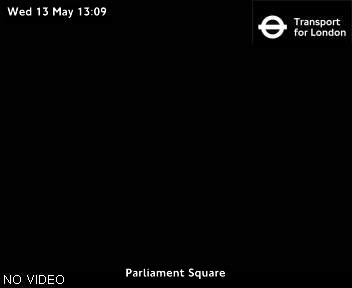 and the BBC yet again show their truly "unbiased" outlook by pulling the Jam Cam of Parliament Square hiding civil unrest from the nation. Odd that this is the only Jam Cam not operating, & this always seems to coincide with any protests on the square!

I should think that Transport for London has pulled the plug and not the BBC. It's the small fact that it's a LFL camera, controlled by TFL rather than a BBC camera.

If there is indeed a pattern why not go down there and offer support everytime the camera is pulled or blackout?

Also where is this meeting?

Commons Speaker Michael Martin has told MPs he is to hold a meeting to
discuss the "highly unsatisfactory situation" of demonstrations in
Parliament Square blocking access to the Parliamentary estate.
Mr Martin will meet representatives from the Home Office, Metropolitan
Police and Westminster Council, as well as the deputy mayor of London
in charge of policing, at 5pm on Wednesday.

In a statement, he told the Commons he supports the right to
demonstrate but said the recent occupation of the square by Tamil
demonstrators disrupted the work of the House, involved considerable
cost and exposed many issues of health and safety.

He also described the square as an "absolute shambles", adding: "In
the light of these difficulties, and given the distribution of
responsibilities of Parliament Square between various authorities, I
can tell the House that I have arranged a meeting with the Minister of
State at the Home Office, the deputy mayor of London for policing, the
leader of Westminster Council, and an Assistant Commissioner of the
Metropolitan Police to discuss how demonstrations in the square can be
better regulated so that the functioning of Parliament is not impeded
and the health and safety of individuals not breached."

The footage of the speaker's statement:

protest must be working then!

"In a statement, he told the Commons he supports the right to demonstrate but said the recent occupation of the square by Tamil demonstrators disrupted the work of the House, involved considerable cost and exposed many issues of health and safety." THATS THE FUCKING POINT!

news of the result of that meeting

new repressive moves planned by parliament - they are moving very fast on this!!