The elaborate plot by 27-year-old Karta got her to within metres of the public, and resulted in the closure of the zoo on one of its busiest days of the year. 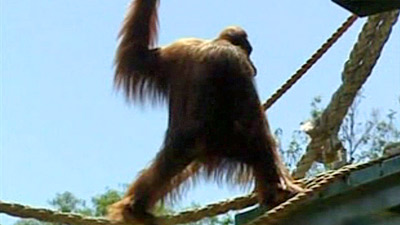 The alarm was raised by a member of the public about 11am.

Zoo curator Peter Whitehead said Karta had twisted a stick into hot wires that encircled her enclosure, short circuiting the wires and allowing her to enter a vegetated area near the concrete and glass fence that separated her from the public.

She then piled up sticks, grass and plant roots and used them to climb onto the fence.

”So in this case she's decided to make a ladder and try to get out of her exhibit.”

Mr Whitehead said Karta was on the fence for about half an hour before climbing back down into the exhibit, after failing to make it past a second fence.