Below is an Open letter from the mother of Dave Mahoney (arrested after the RNC protest in the US) to Susan Gaertner State Attorney.

Dave now faces 10 charges which could lead to decades of jail time. Dave grew up in the UK and was involved in many project in Plymouth, Devon including organising benefit gigs and Plymouth Environment Center.

All involved in his support campaign want him home more than anything in the world and we would appreciate any support you can give.

For more information on Dave's case check out 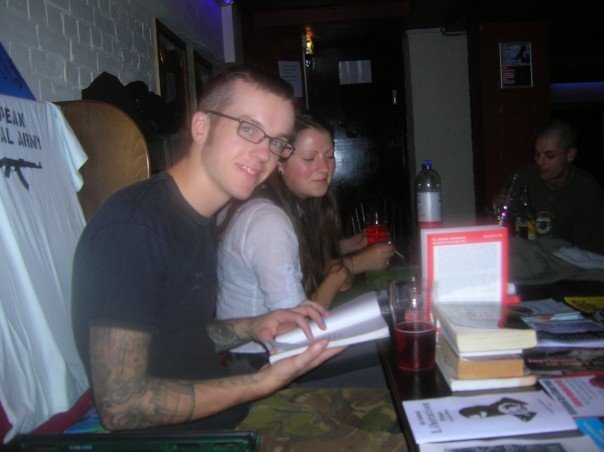 My name is Susan Mahoney. I am the mother of David Mahoney, who is due to stand trial accused of assault in the second degree and terroristic threats, arising from the Republican National Convention of September 2008.

Since David was arrested on September 4th, I have been finding out as much as I can about the RNC and its aftermath. As well as David’s first-hand account of events, I have watched hours of video footage and read much of the extensive media coverage, as well as numerous websites, blogs and the Heffelfinger Luger report.

The impression I have formed is that the police greatly exaggerated the threat posed by protesters at the RNC. In response, they planned and implemented a massive military-style policing operation, which was both provocative and confrontational.

When the event was all over and the dust had settled, the picture that emerged was of an embarrassing mismatch between police predictions of serious crime and disorder, and the reality. The feared anarchy and chaos amounted to a few broken windows, a couple of slashed tyres and some ineffectual attempts to blockade roads. Rowdy football crowds regularly cause more disruption. Ironically, the police themselves achieved precisely what they claimed to be trying to prevent. It was not ‘anarchists’ but security fencing and thousands of armed riot police that closed down parts of St Paul during the RNC.

My concern is that, in order to justify the hugely expensive and controversial policing operation, my son will be demonised as a violent extremist and singled out for disproportionately harsh punishment.

I would like to set the record straight concerning David’s background and character. He was brought up in a hard-working, law-abiding, tax-paying middle-class family. Although born in Pittsburgh, Pennsylvania, he has lived from the age of two in a quiet English village. Never a rebellious or disaffected child, his main interests were sport and the local Scout group, with whom he spent a lot of time hiking, climbing and kayaking.

We were pleased when he went off to university to study geography at 18. As liberal-minded parents, we encouraged him to broaden his mind and think for himself. We got a little more than we bargained for when he returned home with a keen interest in anarchist literature.

After the initial parental dismay, I decided to do more than look up the meaning of ‘anarchist’ in Webster’s dictionary. (By the way, the Oxford English Dictionary makes no mention of violence in its definition of anarchist.) Some further reading was called for, and this is what I found.

Despite their popular image as sinister plotters conspiring to assassinate presidents and archdukes, most anarchists are not violent.

Anarchism has been around since the ancient Greeks. As part of the spectrum of political ideology, it is usually confined to a small minority, but the ideas keep re-emerging in every society across the world, especially in turbulent times.

During the European Reformation in the 17th century, anarchistic religious movements such as the Hussites and the Anabaptists appeared. The Diggers and Levellers set up their rural communes during the English Civil War. Early settlers described indigenous American society, not disapprovingly, as a form of anarchy, without state, laws, prisons or private property.

In the late 18th century, the English writer William Godwin advocated the abolition of government through a gradual process of reform and enlightenment. The French propagandist, Pierre-Joseph Proudhon (“Liberty is the mother, not the daughter, of order”) was the first of the radical nonconformists to call himself an anarchist. He was succeeded by the Russian revolutionary thinkers Bakunin and Kropotkin, as well as Christian anarchists like Leo Tolstoy, author of War and Peace.

I’m sure you are aware of the rich tradition of American anarchism, including influential thinkers such as Benjamin Tucker, founder of the journal ‘Liberty,’ and Henry David Thoreau, whose essay on civil disobedience inspired, amongst others, Gandhi and Martin Luther King.

The long list continues throughout the twentieth century, from the feminist Emma Goldman in the 1920s, to the anti-war activist Abbie Hoffman in the 60s, to the immensely influential philosopher Noam Chomsky.

If American society is broad and tolerant enough to accommodate these great radical thinkers, surely it can do the same for their followers? We should not react to alternative views with fear and loathing. As the British civil liberties campaigner Shami Chakrabarti pointed out recently: “Dissent is the lifeblood of democracy and progress.”

Had my son David and his friends been born four decades earlier, they would probably have made the journey to Woodstock rather than calling themselves activists. But 40 years after that festival of love and peace, what legacy have we, the idealistic Woodstock generation, handed down to our children? Global warming, the collapse of a financial system built on greed, mass employment and pointless wars that have ruined the lives of millions.

No wonder they are angry. Who can blame them for wanting to voice that anger at a self-congratulatory gathering of the Republican Party, whose policies are widely held to be responsible for many of these catastrophes? Remember that this was the occasion when Sarah Palin was introduced as a potential president of the United States. Abraham Lincoln himself said that silence is a sin when protest is called for.

As a middle-aged risk-averse parent, I would naturally have preferred my son to confine his political beliefs to campus debates. However David and his contemporaries, like many before them, see ‘direct action’ as a way to make their voices heard. Some of their activities could be dismissed as nuisance behaviour, but history shows that what might seem at the time to be banal property crime can trigger far-reaching changes.

The Boston tea party was a pivotal event in the American colonies’ struggle for independence. Were it to happen today, would the perpetrators be charged with conspiracy to riot, assault in the second degree and criminal damage? In the words of Thomas Jefferson: “Law is often the tyrant’s will.”

On a speaking tour of America 100 years ago, the English suffragette Emmeline Pankhurst said: “The argument of the broken pane of glass is the most valuable in modern politics.” She and her fellow campaigners were famously imprisoned for breaking windows. Their harsh treatment by the authorities merely served to raise their profile and rally public support to their cause. The suffragettes have gone down in history as pioneers of female emancipation, but who now remembers the names of their jailors?

Very early in his career, Winston Churchill presented a budget that attracted the wrath of the establishment, who felt it was too left-wing and detrimental to their vested interests. He retorted: “We are denounced as … Anarchists and Communists and all the rest of the half-understood vocabulary of irritated ignorance.”

I fear that ‘irritated ignorance’ underlies the attitude of the police and prosecution to my son and his friends. The police’s portrayal of them in the local media as violent extremists with filthy habits shows a mixture of incomprehension and personal distaste.

For me, this biased approach has disturbing echoes of the Sacco and Vanzetti case in the 1920s. No doubt you are familiar with the words of the notorious Judge Webster Thayer, who boasted of nailing those “anarchistic bastards,” although the charges faced by the two men had nothing to do with their political beliefs.

Anyone who took the time to speak to David and his friends would find that, far from being “intent on committing … highly dangerous acts of violence,” they are in fact earnest young citizens who are trying in their own way to make the world a better place.

The American libertarian Murray Bookchin describes three versions of the American dream. “One is the John Wayne tradition … of pioneering individualism; another is the immigrant American dream, this being the land of opportunity … But there is a third American dream, which is the oldest of the lot, dating back to Puritan times, which stresses community, decentralisation, self-sufficiency, mutual aid and face-to-face democracy.”

I can’t speak for David and his friends, but this is my understanding of what they are trying to achieve. It is hard to see how that constitutes any kind of threat to society. At worst, they could be derided as ineffectual dreamers, but when the ice caps melt and the oil runs out, who knows, they could have the last laugh.

Obviously it is for the court to decide on the outcome of David’s case. All I ask is that the police and the prosecution treat his alleged offence(s) objectively, undistorted by personal prejudice against his political views and alternative lifestyle. So far as I can see, his actions at the RNC have caused harm to no-one but himself.

Finally, I would like to appeal directly to you, Susan Gaertner. I see from your campaign website that you have three grown-up daughters, and I hope they have never caused you any sleepless nights. Perhaps they never will, but you can’t be sure of that. As one mom to another, I am asking you not to use the state’s sledgehammer to crush the spirit of my idealistic young son.