The Calais No Border camp, 23-29 June 2009, is a joint venture between French and Belgian activists and migrant support groups and the UK No Borders Network. 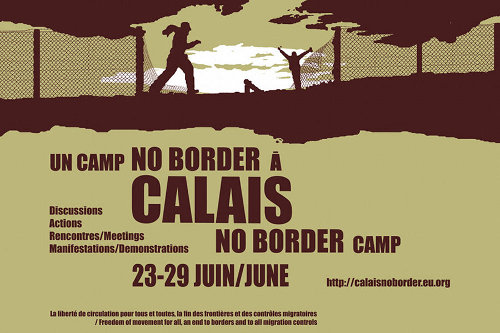 The Calais No Border Camp aims to highlight the realities of the situation in Calais and Northern France; to build links with the migrant communities; to help build links between migrants support groups; and lastly, but not least, to challenge the authorities on the ground, to protest against increased repression of migrants and local activists alike.

We have chosen Calais for two main reasons; it is an important location in the history, development and practice of European migration controls and has long been a major bottleneck for those seeking to get to Britain. But more importantly, it is also a focus of the struggle between those who would see an end to all migration into the EU, and those trying to break down the barriers between peoples, the borders that prevent the freedom of movement for all, not just the privileged few.

Since the mid-nineties tens of thousands have lived in destitution, sleeping rough in Calais, waiting for their chance to cross the channel to England. Between 1999 and 2002 the Red Cross ran a centre at neighbouring Sangatte but this was forced to close after political pressure from France and Britain. Since then, the massive police presence and repression in Calais has forced thousands of men woman and children to wander the Calais region and all along the North coast of France, Belgium and Holland. They are routinely brutalised by the police; tear-gassed, beaten, arrested and repeatedly interned at the nearby Coquelles detention centre. The police regularly burn their shelters and the few meagre possessions that they contain. The local groups that support the migrants by providing food and other humanitarian aid are coming under increasing attack from the police and a number of activists have been arrested in recent months. Meanwhile British Immigration Minister Phil Woolas has been calling for the construction of a permanent holding/detention centre for migrants in Calais docks.

Calais however remains only one small part of the overall picture of European migration controls, a major internal border within the hi-tech EU borders regime. Since the beginning of the decade, the EU been attempting to build 'Fortress Europe'; externalising EU borders into Africa and Asia with EU border guards patrolling the Mediterranean, in Libya and off the West Coast of Africa courtesy of the Frontex borders agency; and via the European Neighbourhood Policy, where countries from the Ukraine all the way round the Mediterranean to Morocco are now paid by the EU to do its migration prevention work for it.

Through this system of border controls, authorities create two kinds of migrants: a small number of ‘skilled’ migrants, who are designated as ‘useful’ to the state; and a massive number of undocumented workers who have no rights and are therefore exploitable as cheap labour. Thus is our fight for freedom of movement also a fight for the rights of all workers.

Building links and working together allows us to share information between us on a transnational level. It also allows us to exploit the fault-lines and cracks in Fortress Europe. Last November, transnational solidarity helped to prevent the planned deportation of Afghans from Calais to Kabul.

This camp will continue the tradition of the No Border camps across the world since the late 1990s and, like the camp taking place this year in Lesvos in August, it will be a space to share information, skills, knowledge and experiences; a place to plan and take action together against the system of borders which divides us all. For centuries European imperial powers have exploited the land, resources and people of the majority world to become wealthy and powerful, leaving war, environmental destruction and massive inequality in their wake. Those who attempt the journey to the UK or elsewhere in Europe are challenging this injustice by their movement. The situation in Calais is a result of the compromise and conflict of interest between French and UK immigration policy and we call on groups, networks and individuals here to take action across Europe and to become part of a global movement of solidarity that defends their right to choose where they move .

Equal rights for all !!

*No One Is Illegal. Freedom Of Movement And The Right To Stay For All*