From May 12th to 14th 2009, Brussels hosted the ITEC exhibition (International Training and Education Conference), the annual top event for companies in the military training and simulation business. On the first day of the event, Vredesactie activists went in undercover and revealed controversial activities. On May 13th, a delegation of politicians visited ITEC to make clear that an event like this is not welcome.
A videoreport with undercover images is now online: 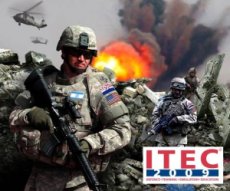 Modern warfare becomes more and more complex. Weapon systems require intensive training. Companies such as BAE Systems, Raytheon, SAAB and Boeing not only produce weapon systems, but also offer training and simulation technology to learn how to use them. The products displayed at ITEC vary from simulators for fighter jets and helicopters and shooting simulation to Command and Control systems to simulate large-scale battle situations. ITEC is not only an exhibition, it's also an important network event for people in the trade.

On May 12th, the first day of the event, activists did undercover research at the exhibition. Obviously, the organisors were a bit nervous about possible disruptive behaviour and uninvited guests. Some of the researchers were refused entry. Others could get in, but were thrown out during their research. Still, several temas managed to bypass the security checks and to smuggle in recording devices. They visited stands, talked to exhibitors, tried several simulators,... and revealed shocking information.

Click here for a video report on the undercover action (in English):

Several of the companies at ITEC develop programs for weapon systems used in controversial interventions and sign lucrative deals with the Israeli army. They deliver the technology that enable countries to wage war and violate international humanitarian law.

Boeing produces a simulator to train on shooting Hellfire rockets from Apache fighter helicopters. Hellfires are a popular weapon in the Israeli army, are frequently used by the US army in Iraq and Afghanistan and make lots of civilian casualties.

Another usual suspect, Lockheed Martin, delivers simulators for it's F-16I fighter jet. The F-16I is designed specially for the Israeli Air Force. Nicknamed 'Soufa' (storm), it's been used for Operation Cast Lead in Gaza, in the attacks on Lebanon in 2006 and Syria in 2007. Presagis, also on ITEC's guestlist, developed software and technology for the F-16I training. The Israeli Air Force also uses training programs based on software developed by Ternion, present at ITEC.

CUBIC Defense Applications develops software for MATBAT-B, part of the Tze'elim Training Base, a multidisciplinary training centre in the Negev dessert. The MATBAT-B fixed site is built upon Cubic's PC-based Range-Instrumentation System (PC-RIS). According to an Israeli officer commenting on this project, the training "proves its added value every single day in ongoing operations along the Gaza Strip and the West Bank.”

More information on controversial links in Vredesactie's dossier (in Dutch):

On May 13th, a delegation of politicians visited ITEC. MP's and representatives of the green and social-democrat parties wanted to inspect the exhibition but were refused entry. After insisting, they were received by Rear Admiral John Tolhurst, Chairman of Clarion Defence and Security Ltd, the organisor of the exhibition. The parliamentary delegation drew attention to a resolution voted in 1995 that declares that arms fairs are, on ethical and political grounds, not welcome in Belgium.